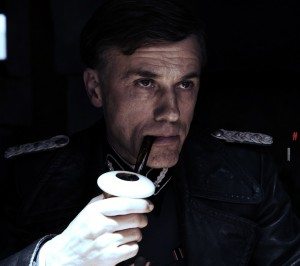 Last night I caught Tarantino’s  ‘Inglorious Basterds’ on TV, the second time I have seen it. Whatever you think of Tarantino as a filmmaker and screenwriter, there is no denying he is a master of the individual dramatic ‘set piece’ – a single scene that in of its self-contained-self, is absolutely electrifying.

Like Hitchcock, he sets up a simple and terrifying problem – in the opening of ‘Basterds’ it’s ‘will the jews hiding under the floor be discovered by the Nazi commander Hans Landa?’ – and then he takes that setup stretches it out with mundane conversation, bombast, wit, menace, even utter silence… and of course explosive violence. I am not a huge fan of Tarantino films, but blimey Charlie, he sure can create ‘a moment’.

While editing 50 Kisses with Simon Reglar, we were discussing one specific film, about whether or not it should be included in the final feature film. For sure it had problems, but it was Simon who said ‘yes, but it has a moment at the end…’ And he was right, it did have a short sequence that powerfully connected the viewer to the story.

This is a secret weapon all indie filmmakers should use. Create a ‘moment’. Work on it in the script and put extra resources into that sequence on set.

For sure, as indie filmmakers we are always beset by lack of time money and light. Often we are forced to work with inexperienced crews and actors. Truth be told, we also over estimate our own abilities and experience. This can often lead to slow, plodding films that really do not best showcase you or your cast and crew.

Hollywood attempts to deliver these moments with spectacle – sometimes it works, more often it’s a tired cliché. And we don’t have the budget. So our moments must come from the characters and story.

And here is another truth, in the real world, agents, managers, executives – they rarely have time to watch an entire film. And if they do, they are used to sifting through the crap to find the diamonds. So give them a diamond. Make sure your film has at least one ‘moment’, a single scene that electrifies the screen, that connects the audience to the story and characters extremely powerfully – deliver just one scene that people talk about after seeing your film and you are in VERY good standing.

I have always tried to do this, and every film I have made has at least one stand out moment. The car crash from ‘Urban Ghost Story’ or the climax of the Fishing montage in ‘Gone Fishing’ for instance.

Of course, ideally you will deliver several ‘moments’, interconnected by powerful and well hewn storytelling and filmmaking. And in a perfect world, the killer scene is also the climax of your story too.

I saw another film over Xmas that also has a terrific and satisfying ‘moment’, and best of all, it was the end scene – ‘Jeff, who lives at home’ – check it out for a movie that anyone could make on a micro budget.

‘Inception’, a screenwriters masterclass
What can we learn from (Oscar nominated screenwriter) Sylvester Stallone? 40 minute master...
Writing Rocketboy, our process for getting words on the page
Project: Rocketboy... top ten tips for getting feedback on a screenplay
Who are you writing for? One technique to help you focus on your target audience
Singer / songwriter / composer initiative for 50 Kisses closes next week
The curse of too many great ideas… proliferation equals indecision