By Chris Jones on January 12, 2013 in Pitching, Professionalism 1 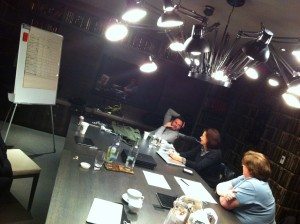 Recently I spent the whole day locked in a hotel suite with the Living Spirit team, discussing what feature project we should pursue. So why did we need to got to such extreme lengths as to lock ourselves away to decide?

Editor Simon Reglar commented half way through the day that he could now see my problem. We had 21 very strong projects, at various levels of development. Like dating 21 different but equally intoxicating people at once, the dilemma was which to settle down with and wave goodbye (for now at least) to the others.

I can’t reveal the specifics of the outcome just yet (for a number of commercial and legal reasons) but I can share our process, and the broad outcomes.

The Strategy – the overall plan, problem and solution

Of course it was deeply painful to say goodbye (for now) to each of those other nineteen projects, as I love them all passionately. But for me at least, filmmaking is a monogamous relationship, I don’t have enough energy nor am I smart enough to have multiple mistresses.

So the gauntlet is thrown down. Laser goggles are on….

One killer tip to make you unforgettable in any pitch or casual industry meeting (and in a...
What is the most important thing that a powerful storyteller MUST do?
The mountain lies ahead and my feet feel heavy...
Why pitching is SO much more than selling your film...
Pitching Your Project: The basics we often forget
Create a ‘moment’ in your story or film to get people talking
Entering competitions and funding processes – top nine tips from the real world