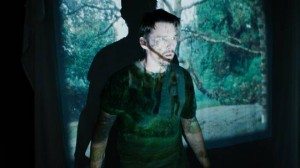 It freaked me out. Plain and simple. And it has stayed with me too. And believe me, I have seen my fair share of horror movies.

So what was so terrifying?

The soundtrack. The score by Christopher Young was heart bangingly original. Add to that a selection of truly nightmarish songs from a collection of little known bands and you end up with a soundtrack that really sets the film apart. I have embedded one track (from YouTube) below on autoplay to spook you just a little bit ;0)

Now here is the kicker. I don’t think ‘Sinister’ is a great horror movie. It does have its fair share of silly scenes, ridiculous character actions and dodgy special effects. It’s a long, long way from a masterpiece.

And yet the soundtrack, for me at least, elevated it way beyond the average horror flick that it deserved to be, into the realms of a kind of waking nightmare. ‘The Texas Chainsaw Massacre’ is another movie that managed to deliver this waking nightmare experience too, but with far greater effect.

The soundtrack made the difference.

So here is the thing. If you spend enough time and invest enough energy into the soundtrack for YOUR film, you can also elevate it significantly too. I have always said that indie films often suffer from lazy soundtracks (and I mean atmospheres, foley, sound effects, music and the mix as well as the music score).

And ironically, it’s the one area of your film that costs just your time and imagination. In terms of bang for your buck in the filmmaking process (aside from script development), nothing delivers more value for less cash than a well executed soundtrack.

On ‘Urban Ghost Story’, we spent a great deal of time creating an acoustic world that was rich, textured and chilling. If you managed to see the film in surround sound and in a good theatre, I am sure you will know what I mean – and it elevated the film.

So how do you create a killer soundtrack? And again, by soundtrack I am not referring to just the music.

Top Ten Things To Consider When Mixing The Sound For Your Film In A Professional Dubbing T...
How To Record Your Own Foley Tracks At Home
Sound Mixing your film: Top Fifteen Tips For Working With The Professionals
11 Steps Required to record your score with an orchestra in Macedonia – a Guerilla Masterc...
Dolby Licence is secured for 35mm prints of Gone Fishing
12 ways to rewrite your British written spec script so it sells in Hollywood
‘Welcome To The Punch’ writer director Eran Creevy interview about how he broke into the film business