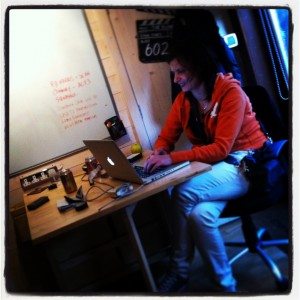 Judy and I are closing in on the final few pages of ‘Rocketboy’ and I thought I would share our rather unusual writing process.

You may know that I have been writing ‘Rocketboy’ on my own, on and off, for many years. The truth is I have lost count of the drafts, probably around 17 or 18 now.

Two years ago Judy and I collaborated on a new draft, an epic rewrite that while bold, didn’t work. And so we went back to the previous draft and started again this year – you can read about the tonal shift we made here…

As I type at my PC now, Judy is writing to my right, scribing the final few pages.

The process we use looks like this. First we discuss the upcoming sequence in depth (usually three to eight scenes in a single sequence) and we make notes and draw diagrams etc. Then Judy writes the first pass as a separate document. I then rewrite that first pass and add it to the full screenplay document. Finally, when we hit the end of the script, we both work on script editing, polishing and tweaking.

The process in detail…

We brainstorm everything in great detail and make notes. I tend to be stronger on structure and the big ideas, Judy is stronger at characterisation, dialogue, and the smaller details that lend authenticity and make us smile. This makes for a strong and complimentary team.

We use DropBox so that as soon as one person makes changes to a document, it’s immediately updated on the other persons computer too (which is also good practice for immediate backups). We do need to keep an eye out for conflicted copies, but as we are sitting next to each other, we just let the other person know when we are opening a file.

Judy spends much more time on straight writing, that is, putting new words on the page. I spend more time editing, and rewriting. This allows me more time to keep going back to the whole script and tweak, or do other work like this blog, or update the websites.

We tend to have about six hours of good writing a day. No matter what, the first hour of every day seems to get eaten up by stuff that has landed in out in-box the night before. We are forever trying to move that work to the end of the day but somehow it never happens.

We often write a little out of sequence. There are some scenes that are all action and I tend to write those while Judy moves on and writes the character scenes that follow on.

I am responsible for building the final draft and stitching all scenes together. I also colour code the dramatic thrust of all scenes (using Final Draft), so we can see at a glance where various subplots have disappeared for too long, or where maybe one part of the story has dominated too long. This is VERY effective at seeing the whole story in a glance.

We listen to movie scores when we write with a few signature albums getting us into the mindset like Pavlovian dogs. Those are Braveheart, Free Willy, Road To Terabithia and a few others.

I now write standing at my desk which I have become a fan of. I have built my own ‘standing’ desk which is very effective.

Judy has recently switched to an electric cigarette. That is less successful. Fingers crossed.

Finally, it’s worth mentioning that we do spend a huge amount of time laughing as we come up with comical, ironic and amusing situations, lines and character traits. Personally, I feel that wherever we can get a gag into our story, authentically and without killing pace or atmosphere, we should do it. Paradoxically, I am not a big fan of comedy films, and Rocketboy is not a comedy for sure. But life is quirky and funny, and whenever we can shine a light on those moments in the script, I feel it’s a good thing for the story and the connection with audiences.

I am sure there is tons more I could write, but I now need to get on with a rewrite of the final ten pages…. How exciting we are that close!

'Swinging With The Finkels', Inspirational Script to Screen with Jonathan Newman
10 Mistakes People Make Writing and Working In Television
How to land a primetime BBC1 TV series with NO past credits
So we got another email from Oscars.org…
Tangerine: Shot on iPhone 5s and with near zero budget, the ultimate microbudget mastercla...
A Career As A Film Editor: The Strategy and Tactics for Success
Why story days are essential for your screenplay: Rocketboy redraft nears completion

One Response to Writing Rocketboy, our process for getting words on the page