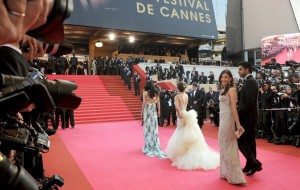 As Cannes approaches, I thought I would share my video Cannes Guide for filmmakers and writers on their first trip. The whole experience will be outlook changing for sure and I recommend everyone involved in film attend at least once.

Key things you will learn

And I thought I would also share a story from the Guerilla Filmmakers Handbook about one filmmaker friend with a BIG pair, about how he crashed a premiere… not in Cannes mind, but this will inspire and terrify you in equal measure.

Q – How do you get invited to those all important media parties where relationships are forged?

Anon – For the first two years in Cannes I wasn’t invited to anything. I don’t know who gets officially invited, nor how they get invitations, it’s a mystery to me but it is important to go. Normally I would have to blag my way in any way I could – scaling fences, crawling through windows, elaborate scams pretending I was related to the film maker. Another very simple way which seems to work every time is approaching the doorman in great haste and saying oh, I’m terribly sorry I left my coat inside at which point they usually let you in. What you want to avoid is being escorted in by some six foot beefcake to look for it. The way that I usually dealt with that was to go to an empty chair and shout, oh, my God my jacket’s missing! My friend must have taken it, let’s look for him together. So he gets really bored and after a while says when you’ve found it come on out. Once you are in the party there is another queue inside trying to get into the VIP lounge. The jacket scam is very good for that one. Hopefully you will have started to rub shoulders with executives, solicitors, agents and the like. You need to develop relationships with these people as they have a direct line into the business and they can keep you informed of who is doing what. They also tend to get invited to all the top functions and sometimes have spare tickets.  Even so, when you get into a party, if you don’t know the people in the first place it is hard to know who to go up to and speak to. I find the best way of meeting people in Cannes for instance, is to stand outside the Petit Carlton and the Petit Majestic at 3am in the morning where you find yourself stood next to drunken acquisitions executives from big studios and the like.

Q – What trade magazines should you get?

Anon – The most popular UK trade magazine is Screen International, which at £2 a pop can be pricey – hey, you can always read it at the newstand. Screen tells you what is happening in the business right now, what films are in production, plus lots of fluff about the business in general.  Screen Finance is also a very good publication, aimed at the financial section of the market. It is a well-constructed newsletter created through an arm of the Financial Times, but it’s really expensive, so find someone who subscribes and raid their offices after they have read it.  You must arm yourself with knowledge – so read the trades and become familiar with who’s doing what. A problem that is very apparent at Cannes is that people just turn up and call themselves ‘producers’ when they don’t know a thing about how the industry works. We all have ambitions and dreams of doing it and you have to start somewhere, but if you are going to call yourself a producer, then at least know how a film works.

Q – Have you ever gate crashed a premiere?

Anon – Many, although one stands out in my mind. I had seen The Mask of Zorro while at the Deauville Film Festival. I enjoyed the film and the party afterwards was an event in itself. When I heard about the big London premiere, followed by a swank party at the Criterion, I though it might be fun to try to blag my way in. I thought I’d give it a try so I called the London press office and announced with great conviction that I am a film maker, and I would like tickets to the party. Without a moment’s hesitation I was refused. There’s nothing like rejection to fuel one’s perseverance. I now had a mission – to get tickets to this party. I needed a way of approaching them where there would be no possible way of them turning me down – and how could they turn me down if I worked for the company? Not only that, but what if I was actually an executive from the upper echelons of the studio in LA? A while back I had sent a script to Universal in Hollywood with the hope of someone actually reading it. Several weeks later the script was returned with a rejection letter. I had kept the letter, so scanned the letterhead in colour and made a replica. I also had a database of executives working in Hollywood, found one, the “Executive Vice-President of Business Affairs”, filled in his name and personal phone extension number and wrote a letter which read something like…

“Dear Maggie – I am writing on behalf of Mr Smith, Executive Vice-President of Business Affairs for Universal Studios here in Los Angeles. Mr Smith will have a brief stopover in London on his way to Paris this Thursday. Please could you arrange for his name to be placed on the guest list for the post-premiere party of The Mask of Zorro. Should you need to contact Mr Smith blah blah blah…”

I printed it out. It looked perfect. I had to be careful of what time I faxed the letter due to the time difference and from what machine I faxed it as most fax machines send out a fax ID. Also, I didn’t want the press officer contacting the LA office, so I gave a convenient London fax number, my mum’s! With these things solved, I sent off the fax and sat back, thinking I’ll just show up at the party. Imagine my surprise when that very day a fax came for me from the London Press office!

“Dear Mr Smith – your secretary faxed me yesterday and told me you would be stopping in London for business. We are delighted that you will be coming to the post-premiere party. Would you also like to come to the Gala Charity premier in the presence of HRH, the Prince of Wales? Unfortunately, your secretary forgot to mention what hotel you were staying at. However if you contact me, I can arrange to have tickets biked over. Yours faithfully…”

OK – firstly I am not staying at a hotel and secondly, I’m not who I say I am. How in hell was I supposed to get her to bike these tickets to a legitimate hotel like the Dorchester, for a fictional guest that would not be arriving? I have a friend with a public school accent who I convinced to help me out. Luckily he is a member of an exclusive club in Mayfair, so I got him to call the press office in his best Queen’s English…

“Yes, I am the general manager of the ‘blah blah’ club and I’m calling on behalf of Mr. Smith who is tied up in meetings all day. He’s asked me to call you to confirm that he will be attending the Gala Premiere and asked if you could send the tickets to his suite here…”

“Sure, we’ll bike them over…” Nervously I turned up at my friend’s club, of course he wasn’t the manager, he was the doorman. And lo and behold, the tickets had arrived.

I went to the premiere in black tie and when I arrived there were film crews relaying the video to the screens inside the cinema – where hundreds of studio executives were watching everyone’s entrance. Simultaneously there was a man commentating on all the entrants, and pointing out the well known faces and executives. At any moment I was waiting for the announcement, and coming in now is Mr Chuck Smith, Vice-President of Business Affairs for our LA office.  Thankfully, that didn’t happen. I had great seats, several rows up from Prince Charles and the Sultan of Brunei. I also noticed that the tickets were numbered by the press office – and the seats were assigned – which presumably meant that someone, somewhere, had a list of where everyone was sitting. Again, I nervously waited for a lady with a clipboard to come up to my seat and introduce herself, Mr Smith, how nice to finally meet you and put a name to the face, when are you off to Paris? By the way, I called your office today and how funny that you’re still in LA…

Q – Isn’t that immoral, no illegal?

Anon – Yes, it is illegal to pretend to be someone else in order to get into a party. Morally it was wrong, but have you ever tried to get invited to one of those things, it’s damn hard. At the end of the day I wasn’t trying to defraud anyone of anything, I was just seeing how far I could get. You have to be prepared to do almost anything at times. My first feature had a very small budget. I did everything I could to save costs. I remember one incident when an agent asked me to bike over the script so her celebrity client could have a look. Oh, sure, I’ll bike it over today would be my normal response. Of course I couldn’t afford to bike over a script every time an agent asked me, so I got into the habit of dressing up as a bike courier and delivering it myself! I would dress up in all the kit, have shades and clip board and put on an Ozzie accent. The things you do!

Q – What is the key to survival in the industry?

Anon – You must have passion for your craft and ask yourself why you are in this business. Ambition is all very well, but a grounded sense of passion and commitment to the art itself is the single most important quality you must have. Yes, the drive for money, success and power might have ramifications, but commitment and belief in your art should come first. You have to be determined and thick-skinned and eventually your perseverance will pay off. Someone, somewhere will recognise your talent…eventually. Don’t give up!

Cannes, A Virgins Guide
The Guerilla Guide To Cannes!

Veronica Mars Crowdfunding: WOW! Take a moment to acknowledge what just happened
Calling all composers – get your music on our screenwriting radio station