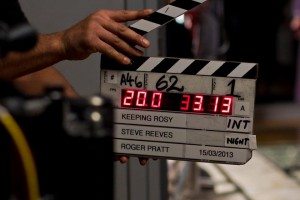 Last week I went to visit the set of ‘Keeping Rosie’, the tenth feature film produced by my old chum Richard Holmes.

This is his third feature film in as many years, which is no mean feat in the film industry. He seems to have worked out the perfect formula for story scale, size of budget, attracting investors and cast and crew working ethos. He calls it ‘tightly resourced’ productions that tell stories that are dramatic but contained.

Richard now works on films budgeted in excess of £1m simply because that’s the only way to make a long term living making movies. And his formula for success is not rocket science either – you get an insight into this and his knowledge in the video.

If you want to see Richard in action, I am running a one day workshop with him just one week after he wraps ‘Keeping Rosie’. On it, he will be sharing exactly how he manages to make films, year on year, and will share all his documents, budgets, schedules etc with you so you can see exactly how he does it. This promises to be a rare and candid glimpse into how an active and successful producer is actually surviving and thriving in todays economy and shifting production and distribution landscapes.