Or…How I came to The Guerilla Masterclass, met a composer and ended up in Macedonia recording my soundtrack with an orchestra!
By Josephine Halbert

I thought I would share the extraordinary story of Guerilla Film Masterclass delegate Josephine Halbert, and how she recorded the score for her short with an orchestra in Macedonia.

Below are the steps you can also take if you want to record your own score with F.A.M.E.S. (extremely cost effectively). Over to Josephine…

Composer Sarah Llewellyn and I met at the Guerrilla Filmmakers Masterclass – I was looking to work with a composer to collaborate with me on my film which was just completed. It’s called ‘A Short Epic About Love’ and I wanted a tailor-made ‘Epic’ inspired score.

The premise of the film is a nod to the 1960s CineCitta Studios filmmaking era where the ‘ancient’ Rome Hollywood Blockbuster meets the one of Fellini.

Sarah found out that it was possible to produce an ‘affordable’ original orchestral score in Skopje, Macedonia with the renowned F.A.M.E.S. Project, run by Laurent Koppitz and Aude Nassieu Maupas (a Parisian couple who run a state of the art orchestral recording organisation in an old Soviet-style 1960s TV building).

For three amazing days in February, we worked with an amazing team to record an orchestral score for my film. Clip below…

It cost  4,500 Euros for the recording (plus WizzAir flights and very reasonable board etc in the city of Skopje).

From the Guerilla Filmmakers Masterclass, though creative ideas, a leap of faith, with lots of hard work and adventure, I am now the owner of an original recording of a twenty minute score!

Aude and Laurent and their team really deliver a great service.  From a director’s point of view it was fascinating to stand back and watch it all take place – I recall nervously thanking the assembled charming ensemble of Macedonians and Albanians as they clutched their musical instruments…  and then just sat back.  Fabulous. 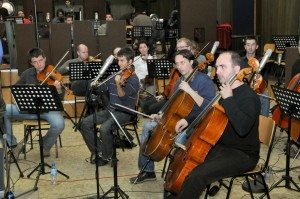 The Steps I Took To Create An Orchestral Film Score

1. Find a composer who has the chops. This job is more than sequencing synths, it will need printed paper music too.

2. Do a deal, and get a contract signed. Agree who will own the music beyond the use in the film – the music could and should go into a library to generate further income in the future for instance.

3. Spot the film with temp music.

4. The composer then writes new music which is performed on synths (using samples). Edit the new music in and replace the temp score. Pitfalls to avoid – often, too much music is added and music can lack a theme.

5. Liaise with F.A.M.E.S (the Macedonia Radio Philharmonic Orchestra) and agree logistics and costs. You are now on your way to getting your music performed by a real live orchestra. They will require a deposit at this point.

6. The composer should now connect with F.A.M.E.S. and supply sheet music for the musicians. This is a big job and not to be underestimated. The composer may need to bring in assistance to help.

7. Travel to Macedonia where the score is recorded. You will need to arrange accommodation. A short film score can be recorded over a weekend.

8. Playback of the film can be via your laptop (with electronic score as guide), though the conductor and musicians may not view it.

10. Complete the recording and enjoy a celebration in Skopje!

11.  Post-recording, the recordings will need to be mixed before being dropped into the final sound mix.

Live on stage with Thin Lizzie - parallels with the film industry
Notes for emerging composers… how to get noticed by producers
Urban Ghost Story, the making of... And the complete soundtrack by Rupert Gregson-Williams
How to best use library music for your film – top 8 pitfalls to avoid
Dolby Licence is secured for 35mm prints of Gone Fishing

Did you know you can get 20% of your spend back for short films using the UK film tax credit?
What are the five main outcomes for filmmakers attending the Guerilla Filmmakers Masterclass?