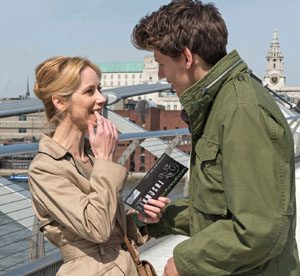 I had become very frustrated with the limited roles that are available for actresses of my age (43). For some time I’d had a character, Sophie, in my head and she was growing bigger and demanding my attention.

I wanted a story for a woman over 40 that wasn’t a cougar or a politician’s wife or a victim of domestic abuse.

I wanted romance, but something that people could believe might actually happen. Yet unconventional. With characters that were don’t want to fall in love for all sorts of reasons. And yet irresistibly attracted to each other.

I wanted seduction and passion without voyeurism.

I wanted dry, awkward, British humour but not slapstick.

I wanted moments of deliciously unspoken emotions revealed to the audience with subtlety and depth.

And I wasn’t getting castings anything like that! So I drafted a rough synopsis and a very loose script. I had worked with double BAFTA Cymru winning DOP Huw T Walters on a previous short film and he loved the idea of the story and agreed to come on board. This then (through Twitter) attracted the attention of our BBC composer William Goodchild who had seen the film “Bubbles” that Huw and I had previously worked on together and was very interested in working on a project with both of us.

So the crew was beginning to take shape and because we were very active on twitter generating a lot of buzz about the project this was attracting some really great people who wanted to be involved.

However the script was still basically little more than a concept. 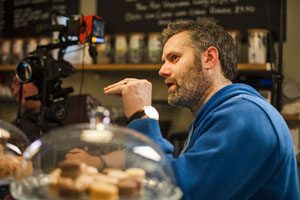 I happened to be chatting to my agent about the project and how I was trying to develop a script and she suggested I meet up with Richard Perryman. I did, and it was obvious within seconds of meeting him that we would really enjoy working together. Not only that but he knew the story I had in my head and had exactly the same ideas for the tone of the film and the style of the dialogue as I had. And so we set about writing the script together, pretty much from scratch.

What’s so great writing as an actor is that you know what you don’t have to write. You know what can just be felt by the actors (and hence the audience), not spoken. What can simply be shown and not verbalised.  Most of our time has been spent going back repeatedly and cutting out dialogue. Beautiful moments that some writers might want to “explain” with words we know will be better just letting them “happen”.

It’s not a silent movie – there’s loads of dialogue – but hopefully we haven’t over-written it. We know that we’ve got the chemistry to fill the space between words. And we’ve had the luxury of being able to grow our characters together, whilst writing.

Our first crowdfund might have been considered a flop as we “only” raised £800 (all strangers and several from America!). However, it’s always great to be backed by people like Marcus Markou who is my absolute idol and film crush and that kept me going! We’re nothing as a team if not bloody-minded so we used our backers money, kept them fully appraised of what we were doing and shot four teasers (guerilla style) and one “Making Of” film in one day in about five locations (including two interior locations) in central London and Bromley.

I organised everything. Locations, costume, dressed our sets and bought the food! The team hadn’t ever worked together as a unit before – Darren our director hadn’t even met Huw the DOP! But We’d put the team together by gut instinct (as well as the, all being creatively excellent) and by the end of the day we all said it was like family. It had an alchemy about it that was very special. We all had one vision. Richard and I completely left Darren and Huw to interpret the script and that was such a relief! It’s impossible to describe how amazing it’s been for Rich and I to see our story begin to come to life. 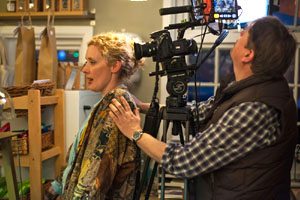 We’ve used local businesses in the trailers for locations (our cafe scenes) and also to provide some costume and props. So to generate interest in our second crowdfund we recently held a Meet-the-Team and Watch-the-Teaser-Trailers evening at Langley Park Arts centre in their 90-seater cinema (highly recommended) for the local community. We had our collaborators there to share their involvement and talk about the experience of working with a film crew. As a result we know we have an incredibly enthusiastic target audience and they loved the concept.

We’ve just launched our second crowdfund to raise £5K for a five day shoot. It’s a hard slog. Fingers crossed we hit our target. But I cannot recommend highly enough actors taking control and at the very least trying to make it happen. If you know good people and you have a good idea there’s nothing creatives like more than the buzz of a great project.

Blimey, I don’t half go on!

If this is resonating with you, come along to the Guerilla Filmmakers Masterclass on June 15th and 16th, a two day film school that will get you making your first movie RIGHT NOW. There will be hundreds of other actors, producers, directors, writers there looking to network with you too.

Get £50 off with code CHRISJONES (making it £85 for the two days). Sign up below, or check out the site here… www.GuerillaMasterclass.com

One Response to Meet an actor for coffee, find out you have amazing chemistry and write a film to fit your dynamic as a partnership!