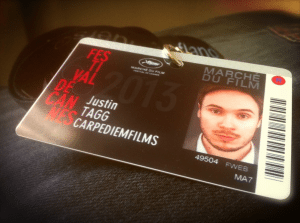 Last year I attended the Guerilla Filmmakers Masterclass looking for some more crew, a little exceptional information and to raise the profile of my crowdfunding campaign going into its last week.

I got a lot more than I bargained for.

The people I met and publicity gained through the conversations I started there (as well as a nice shout out from Chris)  threw us over the line of our crowdfunding campaign to the tune of 176% to leave us with £5,272 from a £3,000 goal. Almost £2,000 of that coming in the 4 days after the Masterclass!

But more than that, I met my First AD (the wonderful Charlette Kilby) and editor (Mr. Jim Page) and learned, amongst many things, something that was to become very important throughout the rest of the production. 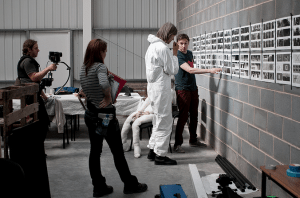 I learned that you don’t just tell the story of your film with a pen in your hand or when the cameras are rolling. You need to be ready to tell it constantly, you have to be a showman, to be brave. You have to become the ‘Entrepeneur Filmmaker’.

When the money landed in my bank after our crowdfunding finished I had a moment of pure fear. 150 people around the world have thrown cash in my direction because they believed in my ability to tell this story. It’s wonderful but it is also very real. They wanted it. They wanted to see my film! I felt a huge responsibility to deliver something special. 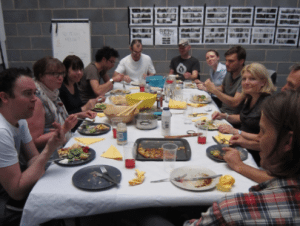 At the Guerilla Filmmakers Masterclass I’d been taught to aim for the best in every field and only adjust your expectation when your options ran out. I learnt that ‘no’ can be a good thing because it allows you to move forwards and make progress. So I ran my budget again, taking into account all of the things we REALLY wanted for the shoot and realised that whilst £5,272 was a great amount for a simple short…. It was not enough.

If we wanted to shoot the best film possible, it was time to work some magic. 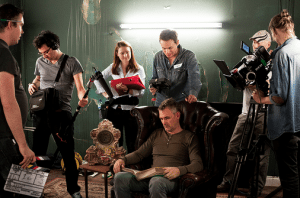 As a team we made connections with some fabulous companies, receiving in-kind support adding up to around £10,000 from a host of business including WESTERN DIGITAL, HILTON HOTELS, BUILDING SUPPLIES ONLINE, CRAIG&ROSE PAINT and many more. We saw that by harnessing the power of many people you can achieve some fantastic results that also led us to shoot on the RED SCALRET and EPIC and to working with BAFTA winning Cinematographer Hákon Pálsson and Executive Producer Graeme Cox (who is also Executive Producer on Richard Ayoade’s THE DOUBLE. 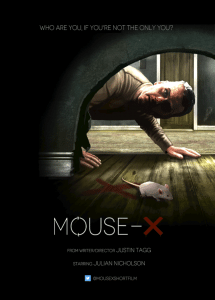 We built our own set, thanks to the fantastic support of Mark Sutherland and made something quite remarkable given our budget utilising heavily discounted materials, clever engineering and a whole host of free wooden palettes to strengthen the design.

We then shot over 4 days in August 2012 which required a great, energetic team, a giant wall of storyboards and a big all crew meal every night to keep us going.

Right now, we’re just finishing off the edit with some VFX work and last month we traveled to the Cannes Film Festival  to get a feel for the place, meet Producers for future projects and build a distribution strategy for this and future films.

It’s been a whirlwind and this doesn’t even begin to tell the full story of our experience but I can safely say that the last 18 months have been thrilling, taking a few words on some sheets of A4 paper and turning them into something tangible that will be shown to audiences world wide. 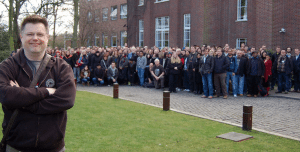 Would we have made it without the Guerilla Filmmakers Masterclass? Of course,  we have enough hunger for this that we’d have found a way. But it helped enormously. It stopped us making mistakes we were walking headfirst into and it helped us prepare for things we hadn’t thought of. Mostly though it allowed us to connect with like-minded folk who we have worked with or kept in touch with since the event.

My life since 2012’s Gfilm has been a rollercoaster and I’m enjoying every minute. So go, meet people, get involved and be a part of the next generation of filmmakers. And don’t be worried if you think that you do not have what it takes because hunger beats talent, if you want it enough then you will make it happen.

You can find out more about Mouse-X by visiting www.Mouse-X.com

There are still passes for the Guerilla Filmmakers masterclass – www.GuerillaMasterclass.com

Why we should all be embracing smaller film budgets and innovating
The phone rang, and from that moment, everything changed... PART 1
The FIVE reasons your career is held back… and how to fix it
My first movie, ‘Necronomicon, book of the dead’
The Guerilla Filmmakers Masterclass 'Fizzled with energy and passion for filmmaking'
One filmmakers journey… how we met at the Guerilla Masterclass and went on an extraordinary journey…
Meet our youngest delegate at the Guerilla Filmmakers Masterclass… and watch her Virgin Media Shorts entry… very cool