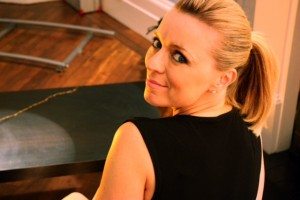 If you are an actor/actress I would highly recommend making your own work. In the beginning especially, you have creative control over what you make. What could be better for an actor than to find juicy roles for themselves or even better, write them themselves?

There is the saying that one doesn’t choose acting, it chooses them. Whoever said that got it spot on. I was 6 years old when I saw my step-mother on television. She had a nice little career in the 60s and in this particular show she was playing a nurse. What happened to me that fateful night I will never forget. I felt a wave wash over me and I knew that that is what I wanted to do. The desire to play someone else grabbed  hold of me and hasn’t let go.

Since then I have had a truly unstraightforward journey. In school I was in a few plays, but in my final year I wasn’t chosen to play the lead. The director called me aside and said that it had been between me and the girl who got the part but she gave it to her as I still had more years to go in school. I looked so young that she thought I wasn’t a senior. For some reason this had a crushing blow to my self confidence.

As a result, when I left high school I decided to forgo acting and got a BA in photography. How funny to do the exact opposite of what I loved, playing someone else, and choose instead something that I could hide behind. And how funny now that I have reclaimed my destiny and am acting again that I am using those skills learnt in photography.

A couple of years ago I realised that although I love acting I don’t love waiting for the phone to ring. One of my closest friends, Diana Juhr De Benedetti, and I decided to create a film production company and make our own stuff. Makelight Productions was born. It was one of the best decisions I have ever made.

I love bringing people together to create something. I love finding the crew and I love the casting process. I love raising money and talking to people. What I don’t love is keeping track of receipts or of money spent.

When I first began what I found helpful was looking out for film contests as a way of gaining experience and getting yourself known in the industry. We came upon the Film4 Scene Stealer competition and made the short, A Stolen Scene of Elizabethan Proportions, based on a scene from the Film4 hit Elizabeth, and out of 500 entries our effort landed us in the top 8 as well as a special jury mention.

Then came an opportunity to make a short for the London Screenwriters 50 Kisses competition. We did a little rejig with the writers of the original script that was submitted  and came up with a novel interpretation. Whatever you do with these types of contests see what you can do to make yourself stand out. Take a risk.

Getting together a team is incredibly easy. There are thousands of talented people out there all wanting to work and slowly you start to find people that you enjoy working with so much you hire them again and again. There is beauty in working with people who get you and who you get. Great places to look are Film Crew Pro and Shooting People.

Raising money has been an interesting game. We have had two successful crowdfunding  campaigns so far. Crowdfunding is fabulous. People want to contribute. They want to be a part of your vision. We are now in development for our first feature and we are researching all the ways of pulling together the funding. It has to come from multiple sources and crowdfunding on some level could well play a part. Funding excites me. It’s crazy but we don’t feel daunted by it(….yet.)

One of our main objectives from the start was that we would pay everyone at least national minimum wage. It’s not a lot but we felt that this was how it had to be. As an actress I have worked on so many no budget films and although I do like doing it for its own sake, I really love being paid. Doesn’t everyone?

As I had decided not to go to acting school I figured I could learn as I went with producing and directing as well. So far so good. There is nothing like making mistakes, lots of them. Post-production felt like a weak point to begin with. It was so alien. I had experience in front of and behind the camera but when it came to editing, grading and sound I was baffled. But after producing one short film I felt I had at least a grasp of it. Also, there is a plethora of amazingly talented people out there teaching short courses with passion. I’ve done excellent short courses including Chris’ Guerrilla Filmmakers Masterclass.

Then there’s festivals and distribution. This is what I am learning now and learn I must as this is how I get myself, as an actor, into the market. This is how people far and wide will see me and my talent and hire me for further work. We took Out of Order and Dream Date to Cannes Short Film Corner this year. Someone saw my acting work and as a result has hired me as the female lead in their terrific script.

I can see where I am weakest and that is my lack of self-discipline. I am great with ideas and when I am in preproduction nothing can stop me, but I am certain that I would be further along if I wasn’t so distracted. So this is what I am focusing on now: vision, will and some downright grafting.

As a producer, one thing I would recommend above all else, is to have a partner. There is nothing better than having someone you trust to bounce ideas off, someone who has strengths where you are weak, someone to cry and ultimately laugh with. On the third day of our first film Out of Order, Diana and I looked around at our amazing cast and crew all working away and said “We did this. We made this happen.” And we keep on doing it. And we won’t stop.

I now love producing as much as I love acting (well, maybe I love acting just a little more). I see this as not only a way to further my career but as a way to make films and television that I want to see and to help other people manifest their visions too. My life is richer, fuller and I am so excited about all the possibilities ahead. How does it get even better than this?

A Valentines Love Letter Video to Everyone Involved in 50 Kisses
50 Kisses Deadline Approaching… teams shooting on RED now!
50 Kisses on BBC Midlands Tonight
'50 Kisses' achieves a GUINNESS WORLD RECORD
What an actor can really bring to your written words… The power of silence
An actors guide to producing: Cast yourself in the lead role
Modern Technology on Modern Man for Virgin Media Shorts
Using video blogs to share your film experience… Rhode Island from the archives