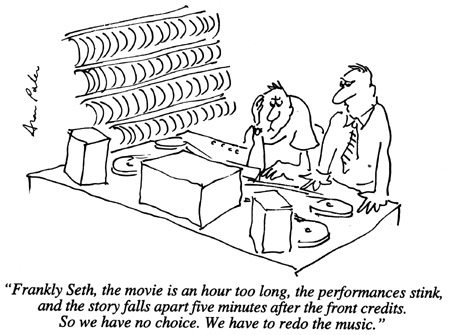 As an indie filmmaker, I know I have real problems is people say to me, ‘yeah, your movie… it had great titles!’

No indie film EVER sold more tickets, DVD’s, downloads, foreign territories (or whatever metric you care to use) because the titles were cool.

And yet I still see low budget movies where the filmmakers have spent vast portions of their meagre resources on epic title sequences.

It reminds me of that Alan Parker cartoon where the editor says… ‘the movie is an hour too long, the performances stink, and the story falls apart five minutes after the front credits. So we have no choice. We have to redo the music.’

There is only so much polishing you can do, and fixating on the titles is in my view, a poor area to spend any resources when cash strapped.

1. White titles on black, cutting up and down (not fading)

3. Have as few titles on the front of the movie as possible – four or five at most.

4. DO NOT credit yourself over and over, it looks amateur and no-one (aside from your ego) cares.

5. If you want to go crazy, do it in the end credits as people who don’t care can walk out / switch off.

By doing this you will achieve a number of things.

1. You will not need to supply separate versions of your film without titles for foreign territories (where they may re-title your film – this is still a requirement of sales agents if you are going down that route).

2. You will not alienate viewers by allowing your titles to get in the way of your work and their enjoyment of it.

3. You will not alienate sales agents who may well walk out 90 seconds in if they are still watching your titles.

4. You will spend all your time investing in making a great movie, a story well told – not a fabulous title sequence.

Spend all of that energy on making your film better – and when you can’t improve it any more, spend that extra energy on promoting your work.

Yes I am sure there are many exceptions, but we are not yet Kubrick, Tarantino, Spielberg (insert your film icon of choice here). Yes I know you can argue you are setting the tone, the scene, it’s cool and all of that stuff. That might be true, but consider this. Is it better to have a killer first three minutes, or killer last three minutes. I know which I would choose, both as a filmmaker AND a movie lover.

Bottom line, don’t let your ego get in the way of showcasing YOUR talent.

Should you use a title sequence for your movie?
What is the single most important choice that will massively impact the success of your fi...
Top Ten Tips For Titling Your Movie