By Chris Jones on August 16, 2013 in Distribution, Guest Blog, Inspiration 0 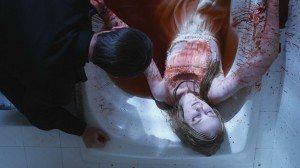 We have read a lot about how hard is to get independent films out there, especially films on the kind of budget we made Heretic for (£30k), so I wanted to counter this with our good news story.

Yup, after three years of toil, tears and tragedy our no-budget horror movie has a distributor in the UK and USA… and payment (minumum guarantee or MG) upfront!

Below are the top six things that we (myself and Pete Handford, the writer / director) did to sign our deals-

Hold a screening in London
You must screen in London. The film industry is there, that’s just the way it is. We screened at Soho House and 15 distributors and sales agents attended. Our distributor attended our screening, but we also made some great contacts with other  distributors , many of whom were helpful and want to see the next project.

Make Google your best friend
We didn’t know who to approach, so had to do it the old-fashioned way and hit Google. After 30+ hours of research we had a list over 100 distributors and sales agents, and 30 distributors in America who we thought might be interested. Then we wrote a nice email and sat back waiting for them to contact us and tell us how much they loved our movie…which leads me very nicely on to….

Don’t take it personally
80% of the companies we contacted rejected us outright or never replied. If you’ve got to the point where you’ve made a movie then it is likely you will have developed a thick skin – you’ll need it. Most people you contact won’t be interested, most won’t even reply to your emails; some will watch your movie and then still not reply. Even those that do come back to you will most likely not be interested. This is ok. It could be they thought your movie was rubbish, but it is just as likely that it doesn’t fit in with their slate or (more likely) they enjoyed it but do not think they can make any money from it, which is ultimately the bottom line for everybody involved.

Once you’ve found a potential distributor…
If a distributor is interested and sends you a contract the number one rule is GET A SOLICTITOR TO LOOK AT IT. No matter what you think you know or how straight-forward the contract looks, you are not qualified to do this part on your own. There are too many intricacies and prat-falls; even the list of deliverables the distributor asks for is enough to put you in therapy, so talk to a solicitor about any contract you might sign. Also remember that a solicitor can and will negotiate on your behalf – ours got us a much more favourable deal and suggested incentives we hadn’t even thought to ask for.

Know your bottom line…
Distributors can be sneaky monkeys (apart from our distributors of course!). We have received contracts that state they never have to release the movie OR promote the movie OR even pay us! We have also received contracts where they have asked for £10k worth of deliverables…on a £30k movie. So know your bottom line – what are you prepared to do to get your movie released? How much are you prepared to spend (and remember that unless you have an MG there is no guarantee you will ever see money from your deal)? What is the minimum you expect your distributor to do with your movie (physical release? Online?) Know this and don’t budge from it no matter how tired and fed up you are.

After the rejection – happiness… and more work
So, after beginning the Heretic voyage three years ago… there is a still long way to go and still work to do. The movie will be released in the UK and Ireland next year and we have lots of promotion to do to get people buying. But, the most important point for us is, we are no longer alone. After three years of leading this with a skeleton crew (and most of the time no crew at all), we have people working with us who believe in Heretic as much as we do, and are working just as hard as us  to make it a success. And for an indie filmmaker, working with people who believe in your project is surely the greatest gift of all…oh, and of course finally making some money!

Wish us luck, and look out for us on amazon!

How To Self Distribute A Film: Masterclass with Marcus Markou (Podcast)
Well that happened...! Blood, guts and glory at Guerilla Film Masterclass
How Filmmakers Consistently Climb Mount Impossible... Four strategies to get you on set
Dynamo Player shuts down.
How You Can Define Success for Your No-Budget Guerrilla Film by Brian Barnes
What ONE thing MUST you get right in your next film?
The ONE thing I needed to get right for Urban Ghost Story… BTS on the stunts