By Chris Jones on August 12, 2013 in Inspiration, Screenplay, Screenwriters Festival 0 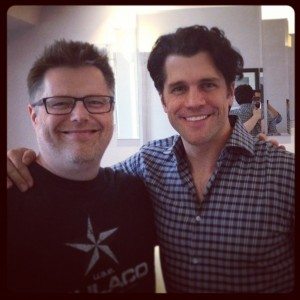 As I followed Hit Girl and The Mother F****r down a corridor at the absurdly opulent Claridges Hotel in London, I had to smile to myself at the surreality of this moment – I had been granted a short audience during a break in their non stop press junket, to chat with Jeff Wadlow, writer director of Kick Ass 2.

‘Always ask for forgiveness, never for permission… if I had waited for permission, Kick Ass 2 would never have been made’. What Jeff is referring too here is the spec script he wrote for Kick Ass 2 – that’s right, spec script. He wasn’t even hired to write it!

That’s one lesson Jeff shared, along with many others you can hear ion the podcast above…

The big takeaway for me was the advice to ‘write yourself to success…’ Films take vast resources, scripts take just you and your imagination… and if you can write it, you can control it.

Why Star Wars endures so powerfully... It’s nothing to do with fan boys and EVERYTHING to ...
Filmmaking is a marathon and not a 100 meter dash... Pace for success
John Cleese Podcast Lecture on Creativity and Originality: The 5 factors that you can arra...
Failing to plan is planning to fail... Film making success lies in pre-production
Ken Loach, top 13 quotes for filmmakers and screenwriters
Why pitching is SO much more than selling your film...
“From One Second To The Next” shocking doc about texting and driving by Werner Herzog
Five rules for putting titles on the front of your film