By Chris Jones on August 3, 2013 in Actors, Dialogue, Online, Screenplay 0 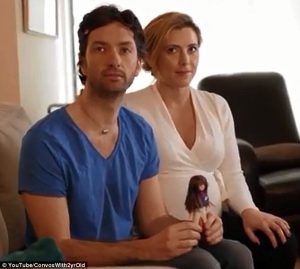 Your dialogue may be awesome, but an experienced director and actors will take it to another lever.

This short video is a fantastic example of what actors and a director can do with your work. The scene is a direct re-enactment of a conversation between a two year old girl and her father, only the two year old is now played by a man. Here’s what it demonstrates.

This is also a terrific example of the kind of work we can all be doing now.

As of writing, this video has now had 12 million plays. That’s an income stream right there.

What is happening now is less interesting than what may happen next
10 Mistakes People Make Writing and Working In Television
An actors guide to producing: Cast yourself in the lead role
Edgar Wright in conversation: One hour screenwriter and filmmaker masterclass
First script notes truly worth their weight in gold!

Conversations with my duaghter, dialogue

Edgar Wright in conversation: One hour screenwriter and filmmaker masterclass
How to run your own micro theatrical release in London: Case Study