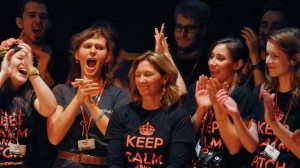 The London Screenwriters’ Festival was the biggest yet, a huge logistical undertaking that is in many ways like shooting a massive movie.

With over 1,000 people on site – staff, speakers, VIPs and of course our fabulous delegates, just managing the event requires both extensive planning and amazing people to execute the very best laid of plans.

This year I recognised something extraordinary in a few of the people who worked at the festival. They were the problem solvers.

These were the guys and girls who would make sure people got fed, even when it wasn’t their responsibility or fault when there was a breakdown in the production machine and food didn’t arrive as planned.

They would tidy up litter without being asked, they would spot problems about to happen and fix them before they occurred. They had awareness of their environment, the people in it, and would be thinking ahead about what problems might happen.

Of course some of that is experience, but it’s mostly a mindset. And that mindset is why these guys and girls will be the people who find the most success in both their lives and their careers. They embrace the idea of being a problem solver and not a problem creator (or problem ignorer, or even some who says ‘that’s not my problem’.)

You see when it goes wrong, it’s often ‘not their fault’ or even their ‘responsibility’.

But still they get on with the solution.

It’s all easily encapsulated in the phrase I first heard from producer Stephen Follows.

‘It’s not my fault, but it is my responsibility’.

When something goes wrong on a production, it’s usually the fault of someone, and even if it’s no-ones fault, it’s ALWAYS the responsibility of someone.

Here’s what a problem solver does instead.

If it’s their fault, they NEVER pass on responsibility. Rather, they take it on the chin, fix it, learn from it and never make the same mistake twice.

Further, in my experience of people with this magical gene for excellence, even if it is NOT their fault OR responsibility, in the absence of anyone taking charge, they step up and deal with it. They are problem solvers.

This is the mark of a true leader in the making. And I am happy to report that we are blessed with many such people in the LSF team.

One final indicator of true leadership is the grace with which we deal with own mistakes, and perhaps more crucially, the mistakes of others. Problems solvers are calm, diligent, caring, clear, no bullshit, direct… They never lose their cool. Never.

Here’s the problem with loosing your cool.

The very point you try to make gets lost in the way that you make it. And on a low budget production, there’s no place for rulers, only leaders.

The lesson? Project effortless grace even in the face of terrible problems. And being right is never as important as getting it done right.

It always comes out in the wash at the end, and the shining lights will always shine so brilliantly that everyone will see them.

So when the shit happens, as it always will, what will you do? Pass on the problem hoping someone else will deal with it? Or make it your responsibility and deal with it with effortless grace?

So it's time to confess... I have a mental illness...
Steven Spielberg: Top 15 Quotes for filmmakers and storytellers
Lyn The Fin Inspires Us All...
One filmmakers journey… how we met at the Guerilla Masterclass and went on an extraordinar...
Top Quotes from spectacle-meister Cecil B. Demille
Top 14 tips for getting KILLER stills that will help sell your film
Day Of The Flowers: Ten Tips for shooting in the heat and humidity abroad