By Chris Jones on March 3, 2014 in Guerilla Film Makers Masterclass 0 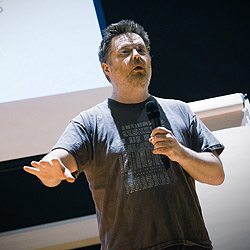 Actually more than a thousand filmmakers have now taken The Guerilla Filmmakers Masterclass and we have an average rating of 4.7 out 5.

99% of delegates agree that it is good value for money and 98% would recommend to a friend.

And here’s some of the five star reviews feedback…

‘DO IT. If you are serious about film-making, do this course. I’ve had my guts ripped out by past horror experiences in film-making. These two days have put me back together!’
Andy Wright- Writer/Director

‘I cannot think of anything that gives anyone making films better return on £60. This is tremendous value.’
Mike Facherty

‘You’ve given me a pair of career spectacles, no more cursing or despondency in a haze of frustrated apathy. Thank you!’
Grant Atkins- Filmmaker

‘when I either get that OSCAR or (second) BAFTA nomination or get a film made on the basis of my script that takes $100m at the box office, I’m going to mention you BIG TIME – in fact: I’ll mention you from now, because it has been one of the very best ‘how to’ courses I have ever attended – and this includes the likes of McKee, Truby, Krevolin, Seger, Aronson et al.’
Laurence Gouldbourne- Writer

‘Nevermind film school, this is a one year course in two days. Amazing.’
Shai Hussain- Writer

‘Of all the courses I’ve attended, books I’ve read or studies I’ve done, this course is the first time I felt I could actually make a film and build a career.’
Jéanine Palmer- Director

‘An event like this makes you realise you’re not on your own. There’s a lot of people out there who you can partner with and all the stories make you realise it can be done!’
Robert Grant- Writer/Director

‘As a screenwriter it has made me more aware of the film making process which will alter some aspects of my writing.’
Jan Freeman- Screenwriter

‘This class has convinced me to never get a day job again, because from now on I’m only going to make films.’
Shami Dirani- Writer

‘Wow! What an amazing weekend. I feel like you’ve bludgeoned me to death with information but I want to thank you for it! It was inspiring, fun and useful beyond words…and when I’m doing my Oscars speech I’ll be sure to mention you.’
Diana Rampton – Writer / Producer

‘I’m going home to plan a documentary that I didn’t know I wanted to make yesterday morning.’
Tom Hallett- Writer

‘I came from Spain just to attend the masterclass and I can say every minute was worth it.’
Ana Carolina Almeida- Film Student

‘The Masterclass is aimed at directors and producers but it should be mandatory for writers too. Probably the most useful single masterclass I have ever been on.’
Dominic Wells- Screenwriter and Film Journalist

‘Information Overload has never felt better! I’ve met so many wonderful and inspiring people that I’ve no excuses not to get on with it and make something amazing.’
Emily Cullen- Writer/Director

‘The inspiration not given by film schools.’
Felix Harber- Writer/Director

‘This workshop gave me clarity of where I am and where I want to go in the industry. I left inspired and couldn’t wait to get started on my journey.’
Elizabeth Caproni- Actress, Writer, Filmmaker

‘Extraordinary things happen to those ordinary people who open their eyes to the opportunities around them and seize them. DO THIS WORKSHOP!’
Saxon Yuen- Documentary and Commercial Filmmaker

‘Fantastic! The independent film industry in the UK has a human side after all. A mentor to many. Thanks Chris.’
Andy Pollard- Filmmaker

‘I highly recommend the course for any filmmaker, or any one in and around the filmmaking community who has ambitions to succeed with their own film making project.’
Ian Tatham- Filmmaker/Director

‘the masterclass 2011 has opened the door to the next stage of my film making destiny.’
Tim Child- Filmmaker and Writer

‘Very inspiring. Reminded me why I want to make films and that it’s something I need to work on every day.’
Sam Jeffreys- Filmmaker

‘The masterclass exceeded my expectations. So densely packed with tips, guidance, honest reflection and fascinating analysis of what happens from script to screen. Such a creative, useful and exciting weekend.’
Wanda Opalniska- Actress/Writer

‘Inspiration to carry on! I now realise that I am crossing from Stage 1 to Stage 2 and that the last year or so have actually been worth something.’
Mark Fry- VFX Artist/Filmmaker

‘Chris is a strong motivational speaker and delivers a solid foundation on the journey of the filmmaker.’
Al Carretta- Writer/Director/Actor/Producer

‘If you take your work seriously, go.’
Emer Gillespie- Writer

‘Chris Jones’ 5 stage career plan ought to be an industry standard…From beginning to end that Masterclass was beyond comparison superb, and for anyone who understands and accepts the Producer’s p.o.v… it was even better!’
Oliver Williams- Writer/Director/Producer/Actor/Marketer

‘Aside from the incredible detailed knowledge I learned on all aspects of film making during the Masterclass, I think what really made it for me was your generous spirit and that has given me back faith’
Sonia Makkar – Writer and Producer

Meet our youngest delegate at the Guerilla Filmmakers Masterclass... and watch her Virgin ...
Get a ton of filmmaking tips, tricks and articles every day
One filmmakers success story - crowdfunding, crewing and Cannes at the Guerilla Filmmakers...
The Guerilla Film Makers Masterclass, Final Feedback
After years working in the real world finding my life rushing past me faster and faster, i...
How to organise, run and host a successful film premiere: Top 21 Tips
Tomorrow I Fly Out To Finland for the Tampere Film Festival, and maybe the Northern Lights