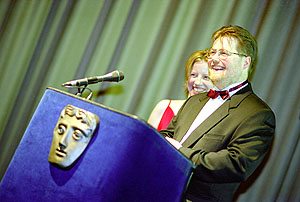 I have made many films, including four feature films and one Oscar shortlisted film (pic right, from the 1998 premiere of my feature film Urban Ghost Story)

Every one of them has had an ‘event’ premiere. I highly recommend you do the same for your film too.

A few weeks back I held the premiere for 50 Kisses. It was an extraordinary evening that everyone present will forever remember. We also ran it as the first night of our limited theatrical release, securing a HUGE screen average for the week and BREAKING EVEN on the release. Blog on that HERE.

So I suggest you say goodbye to Sunday morning cast and crew screenings for free, and say hello to a red carpet, black tie EVENT that begins your journey into exhibition like you really mean it.

Major movies run cast and crew screenings regularly on Sunday mornings, reserving the red carpet premiere for high profile cast, executives, celebrities and journalists. I get why this happens on a Harry Potter movie, but we don’t have $100m budgets for our films – so why treat your cast and crew like second class citizens by ‘celebrating’ all their hard work by inviting them to a poor mans excuse for a premiere and cheap screening?

You and your team have bust your guts making your film, often for years, so celebrate your achievement in style!

Because… a movie premiere is a rite of passage.

And it should be acknowledged as such. Just like a wedding, birth, Bar Mitzvah and death would be. It’s a marker in your life that needs to be recognised.

It is an opportunity for you, your cast, your crew, your friends, your investors, your contributors and your followers to pause and acknowledge the extraordinary achievement that you have completed.

I cannot stress enough the importance of this ‘rite of passage’.

Second, I believe you should run this premiere as a commercial event. Or at least, an event that does not lose money.

You should charge money for tickets. Even for cast and crew. Of course if you behaved like an asshole during production, none of your cast and crew will come. But if you led from the front, with courage and with integrity, most people will want to be a part of the premiere experience.

Yes I know this is controversial, and I get there will be exceptions to this strategy, BUT I also feel the argument that the film industry ALWAYS has free screenings for the cast and crew is a ridiculous argument, especially today. We are part of a new wave where we are daily re-inventing the industry. Why not re-invent the approach to a premiere? Bottom line, like every aspect of your low budget film, you want to be working to paying off debt and reducing costs and NOT pouring more money in the sink hole.

Ultimately it’s about giving people a world class evening, one that they will enjoy and remember forever, and one that the smart people will use as PR on their websites, blogs, social media etc.

While I appreciate that not everyone will be comfortable asking people to buy premiere tickets, I have learned over many years that the secret to success and survival is by making tough choices at every stage.

Big and grand gestures in the moment feel awesome, but the following day, if the bank balance is in the red, all the love will quickly dissipate and the bailing out begins.

By running a premiere in this way, we will all begin the exhibition, exploitation and distribution of our films from a position of strength and not a negative bank balance. That is REALLY cool.

Above all, remember that when someone says ‘I should have a ticket for free’, they are just talking about a DIFFERENT industry, not the low to no budget film industry we are working in.

Make the distinction. Either you pay for it (think £2k to £5k) or the costs are split among everyone attending. In my experience, most people are happy once they ‘get’ that it’s either £20 for them of £5k for you.

Good luck and see you at YOUR premiere!

And I want to just thank and acknowledge distributor David Wilkinson whose help in getting 50 Kisses to the big screen was instrumental. He remains a pillar of the British indie film scene.

Gone Fishing on Korean Fishing TV channel!
50 Kisses… It’s HAPPENING! IT REALLY IS!
Top Ten Things I Learned From My Last Film... And the REAL driving force behind it
The Final Cinema Version of 50 Kisses Is AMAZING!
‘50 Kisses’ has its first pre-production poster
Science Fiction on a micro budget - Neil, submission for 50 Kisses

Something for the weekend? Editing Masterclass with Walter Murch
A thousand filmmakers can’t be wrong… right?

2 Responses to How to organise, run and host a successful film premiere: Top 21 Tips