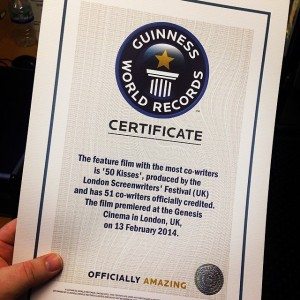 ‘We are delighted to confirm that you have successfully achieved a new GUINNESS WORLD RECORDS title for ‘Most co-writers credited for a film’. We would like to congratulate you on your record-breaking achievement. You are OFFICIALLY AMAZING’

The co-writers of ‘50 Kisses’ are now WORLD RECORD HOLDERS and will appear in the next Guinness Book Of Records!

That’s what we just heard from the people at the Guinness Book Of Records!

To celebrate we have a special ceremony and screening at BAFTA this Friday (tix here). We’d love to see you there.

We realised we had a shot at this record with 50 Kisses last year, and since then have quietly plugged away, documenting and qualifying the record attempt at each step, culminating at the premiere in February. And here we are… WORLD RECORD HOLDERS!

The previous record was held by the American movie ‘Forever and a Day’ (1943) with 21 co-writers. IMDb link HERE.

What does this mean?

For the writers of 50 Kisses, it’s another accolade on their CV, something that will help them in their future career. Something that is unquestionably newsworthy too – it’s time for us all to pick up the phone and call the press and tell them about this extraordinary achievement!

So congratulations to the 50 Kisses writers (in no particular order), you are in the Guinness Book Of Records…!

Looking back at ’50 Kisses’, I am amazed how far we have come from that initial idea to connect writers with filmmakers and platform their work.

Sure there have been bumps in the road, but we have achieved so much together.

We have made a terrific feature film, a British Film that out performed most British films at the box office on the weekend of release.

And now we are in the Guinness Book Of Records…!

But most of all, 50 Kisses got writers writing (AND rewriting).

It got filmmakers collaborating with writers and into action, making their own movies.

It gave writers access to the production process and for many, offered up multiple versions of their one screenplay (Project NEIL for instance).

I am so very proud of our entire team who slogged for two years, bringing it all together with zero budget. You guys are OUTSTANDING!

But most of all, I am inspired by ALL the writers and ALL filmmakers who took a chance, those who wrote a script or made a film. And there are filmmakers like Anil Rao and Stare Yildrim who pour their heart out in their films and support all the other filmmakers, writers like Tracey Flynn and Mark Pallis who continues the marathon where so many others have become spectators… Then there are the writers and filmmakers like Nidhi Gupta and Dave Buick who have NOTHING invested in 50 Kisses, but who still continue to contribute and go the distance. And of course the original team headed up by Gail Hackston.

YOU ROCK! ALL OF YOU!

Success lies in the taking of courageous action, and then in staying the distance, even in the face of unforeseen adversity.

I will never forget the ‘50 Kisses experience’. Never.

'Welcome To The Punch' writer director Eran Creevy interview about how he broke into the f...
What can story tellers learn from Andy Murray?
‘50 Kisses’ – have you chosen your project yet?
The tricks of a mind reader... use mystery at EVERY stage of story development
Why do we do what we do? Unlocking the genesis of the Creative Muscle, Mind and Heart