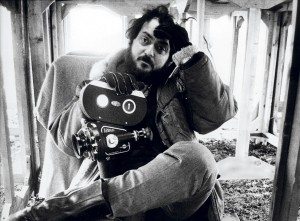 Love him or loathe him, Kubrick is an icon of 20th Century filmmaking. Here are my top ten favourite quotes of his…

‘If it can be written, or thought, it can be filmed’

‘Perhaps it sounds ridiculous, but the best thing that young filmmakers should do is to get hold of a camera and some film and make a movie of any kind at all’

‘The screen is a magic medium. It has such power that it can retain interest as it conveys emotions and moods that no other art form can hope to tackle’

‘A film is – or should be – more like music than like fiction. It should be a progression of moods and feelings. The theme, what’s behind the emotion, the meaning, all that comes later?’

‘Observation is a dying art’

‘I’ve never achieved spectacular success with a film… none of my films have received unanimously positive reviews, and none have done blockbuster business’

‘If you really want to communicate something, even if it’s just an emotion or an attitude, let alone an idea, the least effective and least enjoyable way is directly’

‘The lasting and ultimately most important reputation of a film is not based on reviews, but on what, if anything, people say about it over the years, and on how much affection for it they have’