By Chris Jones on July 27, 2014 in Quotes, Screenplay, Screenwriters Festival 0 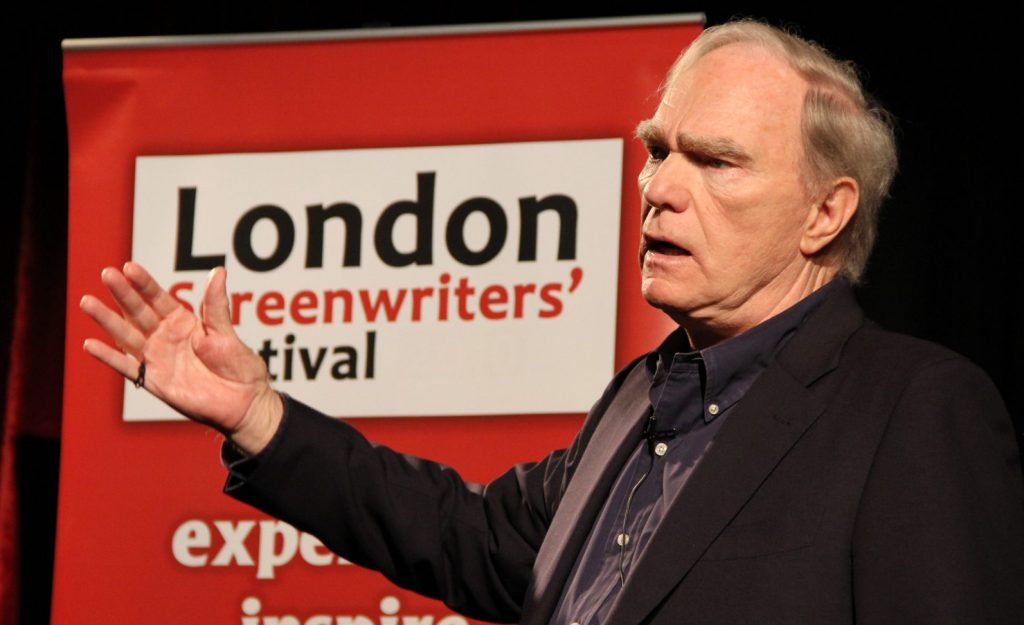 Robert McKee remains one of the most influential voices in storytelling training, and having had lunch with him and his wife numerous times, it’s easy to see why. He knows his shit.

Seriously, I usually turn up for lunch, sit down and just listen to a master as he shares his most recent discoveries. After two straight hours, I then leave, my brain leaking out of my ears and nose it’s so overloaded with new ideas.

His book ‘Story’, is like rocket science for storytellers and for some, a little dense and scary.

My favourite though is his audiobook which is a total steal at just £15 on Amazon (HERE) and similarly priced on iTunes. If you want to write movies, this is the very first thing you should buy.

So here are his top sixteen quotes…

‘All writing is discipline, but screenwriting is a drill sergeant.’

‘What happens is fact, not truth. Truth is what we think about what happens.’

‘No civilization, including Plato’s, has ever been destroyed because its citizens learned too much.’

‘Most of life’s actions are within our reach, but decisions take willpower.’

‘A culture cannot evolve without honest, powerful storytelling. When a society repeatedly experiences glossy, hollowed-out, pseudo-stories, it degenerates. We need true satires and tragedies, dramas and comedies that shine a clean light into the dingy corners of the human psyche and society.’

‘Beyond imagination and insight, the most important component of talent is perseverance—the will to write and rewrite in pursuit of perfection. Therefore, when inspiration sparks the desire to write, the artist immediately asks: Is this idea so fascinating, so rich in possibility, that I want to spend months, perhaps years, of my life in pursuit of its fulfilment? Is this concept so exciting that I will get up each morning with the hunger to write? Will this inspiration compel me to sacrifice all of life’s other pleasures in my quest to perfect its telling? If the answer is no, find another idea. Talent and time are a writer’s only assets. Why give your life to an idea that’s not worth your life?’

‘No matter our talent, we all know in the midnight of our souls that 90 percent of what we do is less than our best.’

‘Do research. Feed your talent. Research not only wins the war on cliché, it’s the key to victory over fear and it’s cousin, depression.’

‘Secure writers don’t sell first drafts. They patiently rewrite until the script is as director-ready, as actor-ready as possible. Unfinished work invites tampering, while polished, mature work seals its integrity.’

‘A fine work of art – music, dance, painting, story – has the power to silence the chatter in the mind and lift us to another place.’

‘In a world of lies and liars, an honest work of art is always an act of social responsibility’

‘Write every day, line by line, page by page, hour by hour. Do this despite fear. For above all else, beyond imagination and skill, what the world asks of you is courage, courage to risk rejection, ridicule and failure. As you follow the quest for stories told with meaning and beauty, study thoughtfully but write boldly. Then, like the hero of the fable, your dance will dazzle the world.’

‘True character is revealed in the choices a human being makes under pressure – the greater the pressure, the deeper the revelation, the truer the choice to the character’s essential nature.’

‘Life on its own, without art to shape it, leaves you in confusion and chaos, but aesthetic emotion harmonizes what you know with what you feel to give you a heightened awareness and a sureness of your place in reality.’

Top 14 Christopher Nolan Quotes for filmmakers and screenwriters
Transcript from the Spielberg, Lucas and Kasdan 'Raiders' story conference
The FIVE reasons your career is held back… and how to fix it
5 Steps to Creating a Compelling Antagonist for Your Film… Meet the Nolan incarnation of T...
What can we learn from (Oscar nominated screenwriter) Sylvester Stallone? 40 minute master...
Werner Herzog Top Thirteen Quotes For Filmmakers

Top ten tips for filming in the Jungle
John Hughes: Top quotes for filmmakers, screenwriters and creatives who are young at heart