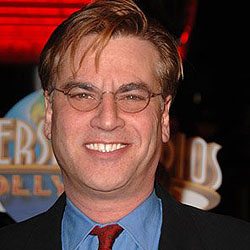 There are few writers whose work is so distinctive that as soon as you hear it spoken in a show or film, you know who wrote it.

Aaron Sorkin is one such writer. His dialogue just crackles along leaving writers like me breathless and Joe public grinning in satisfaction. And his CV is stunning – movies include The Social Network, A Few Good Men and Charlie Wilsons War and TV is even more impressive with 155 episodes of The West Wing. Seriously, 155 episodes! WOW!

Here are his top ten quotes to inspire you.

‘Rewriting is a lot easier than writing, because you have a problem to solve.’

‘Good writers borrow from other writers. Great writers steal from them outright.’

‘An artist’s job is to captivate… if we stumble into truth, we got lucky.’

‘There are some screw-ups headed your way. I wish I could tell you that there was a trick to avoiding the screw-ups… but they’re coming for ya. It’s a combination of life being unpredictable, and you being super dumb.’

‘Smart people surround themselves with smart people who disagree with them.’

‘There is order and even great beauty in what looks like total chaos. If we look closely enough at the randomness around us, patterns will start to emerge.’

‘I grew up believing, and continue to believe, that I am a screw-up, that growing up with my family and friends, I had nothing to offer in any conversation. But when I started writing, suddenly there was something that I brought to the party that was at a high-enough level.’

‘A friend is somebody who says the same things to your face that they would say if you’re not in the room.’

‘Any time you get two people in a room who disagree about anything, the time of day, there is a scene to be written. That’s what I look for.’

‘Trying to guess what the audience wants and then trying to satisfy that is usually a bad recipe.’

‘A hero would die for his country, but he’d much rather live for it.’

Space Oddity: It's cool on SO many levels!
Lyn The Fin Inspires Us All...
How best to be a filmmaker in 2015?
I started making films at the age of 64… Guerilla Filmmakers Masterclass
Meet Jonathan Newman, writer and director of ‘Swinging With The Finkels’, inspiring Q&...
What is the single most important choice that will massively impact the success of your film?
Werner Herzog Top Thirteen Quotes For Filmmakers