The title of your film can make or break the entire project, and not just during the release, a poor, unfocussed, long, woolly and self important title can make things hard right from the get go.

When Tom Cruise scifi action vehicle ‘Edge Of Tomorrow’ bombed at the box office, I scratched my head in wonder. Why could such a cracking film, with Cruise, in apparently a clear genre, do so badly? 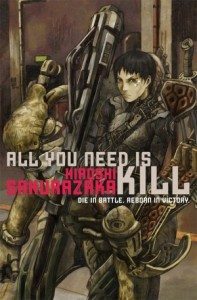 This week came the news that Edge Of Tomorrow is now retitled ‘Live Die Repeat’ (the original tag line on posters for the film). Yes that’s a stronger title. More perplexing is the choice to switch from the even better original title ‘All You Need Is Kill’ (the novel and manga graphic novel).  My feeling is that high up in the studio, there was a fear of using the word ‘Kill’ in the title, and so it was changed. I don’t know this for a fact, it juts a guess. What I do know is that fear is often the root of poor decisions.

(Note: I am not convinced that the title alone caused this film to perform so poorly, I also think the appetite of audiences in shifting, the big indicator being ‘The Fault in Our Stars’ doing so well in contrast.)

I have had this experience personally when my second feature film would not sell in the USA, a serial killer thriller called ‘White Angel’. We retitiled, did some new artwork and it sold immediately.

The title of your screenplay or film serves one purpose. To get the reader / actor / producer / investor / distributor / the final consumers… all to say, tell me more. Better still, I am in.

The title is a sales tool. It’s not a creative expression. We are in the business of selling our stories, at every stage of the process. All art that has any commercial aspiration plays by these rules.

Yes when we get to be successful we can take bigger risks with esoteric titles because the title is prefaced with ‘Quentin Tarrantino’ or you may have movie stars that help.

And yes, we can always find movies with esoteric titles that did very well too, so it’s not a rule. But it is a principle. And it’s a sales principle. The title is your very first hook. And I would argue it should be clear, dramatic, short, visceral and emotive…

ANYTHING you can do to make your work stand out from the tidal wave of messages seducing people away from your project is something you must consider.

Consider this. The title is SO important, sequels are almost always s reuse of the original title. Lethal Weapon, Lethal Weapon 2 etc.  It’s a very simple and fundamental principle that so many people get wrong, or figure out way too late.

I wrote a post some time ago with the ten principles of movie titling – you can check that out here… http://www.chrisjonesblog.com/2011/07/top-ten-tips-for-titling-your-movie.html

The bottom line is this. Get the great title from the start. One that speaks to your audience.

And if one does not present when you begin, don’t fear changing it during production. Of course this may have an impact on your social media channels, but I would argue that even that cost is worth paying.

Top Ten Tips For Titling Your Movie
Five rules for putting titles on the front of your film
Should you use a title sequence for your movie?
Sound Mixing your film: Top Fifteen Tips For Working With The Professionals
Top Ten Quotes from Aaron Sorkin for Screenwriters