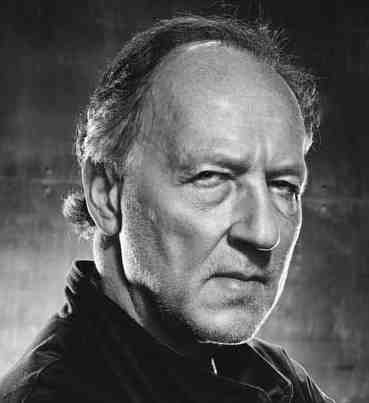 Werner Herzog is one of the most diverse, uncompromising and staggeringly prolific filmmakers on the planet.

His gaze is often so clear and direct as to become painful, yet a truth regularly reveals itself inside the scrutiny of his work.

Here are his top ten quotes to keep you on track and inspired.

‘Film is not the art of scholars but of illiterates.’

‘If you do not have an absolutely clear vision of something, where you can follow the light to the end of the tunnel, then it doesn’t matter whether you’re bold or cowardly, or whether you’re stupid or intelligent. Doesn’t get you anywhere.’

‘The best advice I can offer to those heading into the world of film is not to wait for the system to finance your projects and for others to decide your fate.’

‘The universe is monstrously indifferent to the presence of man.’

‘Ambition is to be the fastest runner on this planet, to be the first on the South Pole, which is a grotesque perversion of ambition. It’s an ego trip, and I’m not on an ego trip. I don’t have ambitions – I have a vision.’

‘Money has always had certain explicit qualities: it’s stupid and cowardly, slow and unimaginative. The circumstances of funding never just appear; you have to create them yourself, then manipulate them for your own ends.’

‘My ideas are like uninvited guests. They don’t knock on the door; they climb in through the windows like burglars who show up in the middle of the night and make a racket in the kitchen as they raid the fridge.’

‘I think the worst that can happen in filmmaking is if you’re working with a storyboard. That kills all intuition, all fantasy, all creativity.’

‘Facts sometimes have a strange and bizarre power that makes their inherent truth seem unbelievable.’

‘I think it is a quest of literature throughout the ages to describe the human condition.’

‘I work very fast and steadily, and I don’t hardly ever notice that I’m working. It feels like just breathing or walking when I do films.’

‘I never have searched for a subject. They always just come along. They never come by way of decision-making. They just haunt me. I can’t get rid of them. I did not invite them.’

‘a phone, computer and car — are all you need to produce films.’

What's the secret to getting through a huge script on limited resources?
'Only the valiant should create, only the daring should make films'
Why Star Wars endures so powerfully... It’s nothing to do with fan boys and EVERYTHING to ...
Oscar winning Producer Gareth Unwin and Oscar winning writer David Seidler: The Kings Spee...
Design your destiny by managing and creating your beliefs
Ray Bradbury: Top 15 quotes for writers and dreamers
Top Ten Quotes from Aaron Sorkin for Screenwriters
How improvised casting can help both find the right cast AND inform rewrites of the screenplay