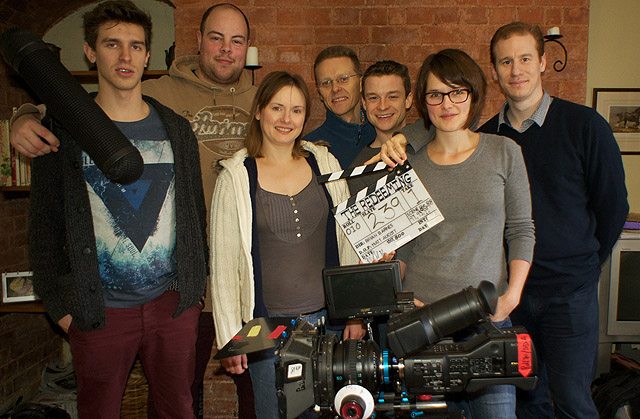 AKA – What I learned on the Guerilla Filmmakers Masterclass that I used on set with my first feature film The Redeeming.

I’ve taken Chris Jones’ Guerilla Filmmakers’ Masterclass twice – in 2011 and 2012. And you bet your bottom dollar I bought a ticket for this year’s last ever class the instant the announcement e-mail arrived in my inbox.

Why? Because it works.

But it’s not only the powerful information you learn, it’s also the incredibly exciting atmosphere of the event. The resultant mindset shift it delivers is worth its weight in a gold Alexa kit with cinema prime lenses. Personally, if I pick up just ONE killer technique from a seminar or workshop, I’m satisfied. At his masterclass, Chris offers up dozens of lightbulb-moment tips and tricks across the 2-day event.

I can now proudly state that, because of what I learnt, I have been able to make my first no-budget Guerilla feature film The Redeeming. We’re currently in post-production, working our way to a fine cut. I’d like to share with you the top 15 insights learnt from Chris that enabled me to get where I am.

The most important thing is to connect with an audience
Why are you making films? There’s no point in slogging your guts out to make a film unless you have the end viewer in your mind’s eye at all times. I made my feature film for “Mary”, a 35-year-old woman who likes psychological thrillers like Misery and The Shining. Chris’s advice helped me to focus on a specific audience and, every time I had to make a difficult decision during the making of the film, I thought about what Mary would want.

Consistency of output is important
Once you’ve worked out what kinds of films you want to make, start making lots of them. I made over 20 short films before I made my first feature film. Until I learnt this tip on consistency, I was genre-hopping all over the place, but my latter shorts were all thrillers or psychological horrors. My psychological horror short The Urge won 5 awards, including a Best Film and a Best Screenplay award. I want to be known as the “thriller/psychological horror director”.

Genre is everything
As an unknown director making a no-budget film with unknown actors and the best script you can buy with no money, the only thing that you can rely on to help you sell your film is the genre. The Urge has a clear genre – psychological horror – and this enabled me to get it picked up by IndieFlix, where it has consistently been the 8th most watched film on their horror channel since its launch in January 2014.

Title and marketing are key
This story has been redacted but will be shared at the masterclass (CJ).

Avoid spending money
I would re-phrase Chris’s advice as “Work with what you have”. I made a commercial a few months before I shot The Redeeming and, while I was casting that, I met such marvellous actors that I was sure I could find great talent for my feature film. I effectively cast the actors and then asked my writing partner to work on a screenplay with them in mind. I had also secured the location before we started writing, so I knew the film was possible even before I started trying to get it made. In addition, we used the actors’ own clothes as costumes and only wrote a prop into the film if we already had it.

You don’t have to know everything going in
It’s OK to start making the film before you know how you will finish post-production and delivery. Just get started! Once you’ve got something in the can, it becomes a tangible project and people will be more likely to help you complete it. Which leads me to –

Set a date for your shoot and it becomes real
The greatest commitment you can make is announcing publicly when you will start shooting. It scared the hell out of me to pick a date and tell everyone about it. I had no idea whether we’d be ready in time, but I had to tell people something! In the end, we had to delay the shoot by about 3 weeks from the originally announced dates, due to a change in actor availability – but the important thing is that we committed to the project and shot the film!

Minimise story days
Oh, boy, have I learnt this the hard way. The Redeeming is a near-realtime story covering about 12 hours in its 81-ish minutes of running time. That means only one story day – one set of costumes, one look for the duration of the film – really simple to keep track of. Contrast with Gillian’s Persona, a web series that I directed. We shot it with pretty much the same crew a year or so earlier and had to shoot 9 pages per day (!), compared with the slightly more relaxed schedule of The Redeeming’s 8-ish pages per day. However, we had to keep track of 14 story days across the web series shoot! It was a planning nightmare – the actors were constantly changing clothes and we burnt a lot of time with that and checking continuity.

One location for cast and crew
This tip originally comes from the master of low-budget filmmaking, Roger Corman. Chris tells how he applied this idea to White Angel and how it paid off for him. For our film, we found a remote cottage in the Somerset countryside, which could serve as both story location and accommodation for cast and crew for the duration of the shoot. We all ate, slept and worked together for 10 days. The atmosphere on set was incredible – so positive and enabling, because we functioned like a close-knit family helping each other out. I’m telling you, it was like an episode of The Waltons or Little House on the Prairie!

Get production value in your film
Chris taught us that the priorities in achieving production value are the location, actors, props and photography. I had already found a killer location for the story and had cast some incredible actors. We also owned some cool props before we started writing – such as the handgun and poker (hero props) – which would both become central to the story. My cinematographer and I had made several short films together beforehand, so I knew that we could deliver a high level of production value.

Avoid “damage” on your protagonist
Chris’s advice is that you shouldn’t allow your main character to have progressively more serious facial wounds like John McClane in Die Hard, as it will prevent you from re-ordering scenes in the edit. Your script will need a lot more work in post than any of your short films, and being able to re-order scenes helps a great deal with that. If the characters have an increasing amount of damage over time, you won’t be able to do it. The Redeeming has been in post for well over a year and re-ordering scenes has been a frequent occurrence as we try out new ideas. It wouldn’t have been an option without this tip!

Get maximum emotion from minimum shots
Plan your shooting coverage well in order to get the scenes shot quickly and efficiently. I follow the principle of “cast strong actors who will deliver great emotion for you, and then stay out of their way” – don’t design crazily elaborate shots that will need multiple takes, just keep the coverage simple and let the acting “do the talking”. I use Shot Designer as my shot planner of choice – amazingly helpful. I had the whole film planned on an iPad throughout the shoot and always knew what the next set-up was – there was never any downtime at all while I “waited for my muse”!

Show your film to a test audience
This is where we are at the moment. We had our first test screening of The Redeeming a couple of weeks ago. Our overall appreciation score was 7/10. Our lead character scored 9/10. Incredible scores, considering that our cut hasn’t even got any music on it yet! Importantly, the screening also identified exciting ways to improve the film, which is what we’re working on now.

These are just some of the things that I’ve learnt from Chris’s Guerilla Filmmakers’ Masterclass. You’ll probably come away with a different set of tips, because different things in his presentation will chime with you, so I would urge you to attend for yourself. It WILL change your filmmaking life!

Brian Barnes has been making films since 1987, mostly in the corporate video sector, where he has made videos for 3 of the world’s top 5 brands – Apple, Google and Microsoft. The Redeeming is his first feature film.

Thanks Brian – you can sign up to the last Guerilla Filmmakers’ Masterclass for £69 for the two days HERE or use the widget below. Dates 25th and 26th July, Regents University, London.

I started making films at the age of 64… Guerilla Filmmakers Masterclass
How to produce your movie: Ted Hope and Christine Vachon at AmericanIndependentsDay.com
Top Ten Things To Consider When Mixing The Sound For Your Film In A Professional Dubbing T...
Failing to plan is planning to fail... Film making success lies in pre-production
The Guerilla Filmmakers Masterclass Black Friday… MAKE YOUR FILM!
Richard Holmes Advanced Producing Tweets... what an awesome day!

Why I choose to be an outstanding father.
How one actress took charge of her career and wrote, produced, directed and acted in her own film