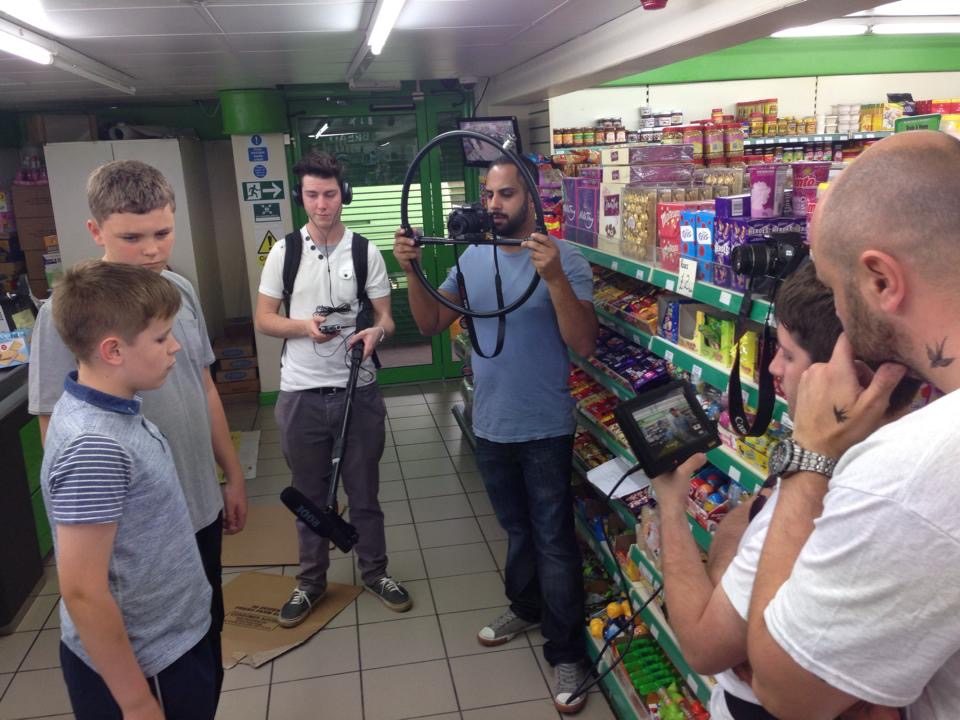 GFilm alum Lee Greenhough has just completed his recent short, post the previous Guerilla Filmmakers Masterclass and I asked him to share some of his insights so we can all learn from his experience.

So it’s taken me just over 11 months to make my latest short film ‘Three Strikes’ and every time I make a short film I learn lesson after lesson (who needs film school). So I did everything you’re told not to (lots of locations, lots of characters) and as I try to raise a little bit of money for the NSPCC at the premier I wonder if the audience will enjoy it (or have I made a turkey). So moving forward I thought I’d list some of the valuable lessons learnt (good and bad) for next time.

Reliability from your cast and crew is crucial. People are working because they believe in your story and are giving up there valuable time to you for next to nothing. Trust and reliability are key, you have to trust that people will be there when needed, especially the first time you use someone. You can have Tom Hardy guaranteeing to help you with your film (he didn’t by the way), but when he doesn’t turn up on the day of shooting it don’t mean..nowt!

A very valuable lesson and one which Film Maker Chris Jones installed at his Guerrilla Masterclass was ‘always have a proper Sound Recordist. Unfortunately for me this important tip went in one ear and out the other at the time (regretfully). While filming we had friends helping with sound recording and trying to do a great job however when a scene is being filmed it’s so easy to be distracted, a professional Sound Recordist is only doing one thing and that’s listening. The bird that decides to chirp or the buzzing from a nearby fridge, only faint interruptions but to a sound Recordist, it’s what they look for. On ‘Three Strikes’ we had some scenes with serious sound issues and as such had to use the camera audio which was pretty poor. Converting it and making it sound half decent was a mammoth (bastard) task.

After all the trials and tribulations, after the sweat, blood and tears editing, I think the final film has one thing that helps it get away with some of the mistakes, and that’s heart and story. You can have the most polished film on the planet but if it hasn’t got a story and doesn’t have the heart to make you care, then what’s it really worth. Luckily we made a short with heart and story and luckily that got me through the countless times I thought balls to it!

Making a short film on limited time, resources, oxygen etc etc, means everyone is putting 100% into their role and pushing forward; but one thing that slipped was a short scene that someone (me) forgot to film. With all the setting up and filming going on it’s hard for anyone to sit back and double check that all the shots and scenes are covered. Everyone is focused on what’s being filmed. For me, next time I don’t care if it’s my grandma, I’m getting someone who will keep me in check and make sure every scene, dialogue and shot is covered.

Plenty of shot coverage is always helpful but too much and sifting through it is an arduous task. When we filmed we tried to use two cameras at a time, one for the master shots and one for any pickups. The main problem was that when I came to edit the film some of the colour grading was a nightmare between different makes of cameras and lenses. I could just about grade a Canon and Panasonic together but a Canon and a Sony forget it, a nightmare. I like my films to have plenty of colour but I had to de-saturate a lot of the film (it was either that or black and white). Using the same camera is not always possible though, for instance next time we might use a go pro, a Canon and a Black magic but the key is to keep these scenes as separate as possible because if the shots interlace then the colour grade has to be perfect and for the editing, that’s a ball-ache.

You’ll never get anywhere unless you collaborate with your team while shooting. The cast and crew had plenty of ideas and some I implemented and they worked great. The key is listen and look at it, never dismiss it for you own ego, people have great ideas, use them, it will make your film better.

Again got to give a shout out to Chris Jones on this one, editing tight is key. I’ve never been one to include shots not needed anyway but the more I looked at the film the more I spotted cutting potential. To begin with the film was 15mins long and I thought I would struggle to get it to 13mins. Now it’s under 10mins; everything is said and done for a reason and at a good pace. I think it’s easy to get hypnotised by the long lingering shots from major studio films. On a zero budget short…it aint happening!

As the Director and Editor for this film, getting motivated to finish it when everything was going wrong in the edit was a real pain. So I added myself a couple of deadlines that I knew I had to hit. Firstly I wanted to shoot my next short film and also I wanted to enter ‘Three Strikes’ into the local film festival. Both these things pushed me to get the film finished. Every time I look at this film I could tweak it but you have to decide when enough is enough and as they say in Frozen ‘Let it go’ (my daughter will like that reference).

We all know that we should be using one location for the whole story but sometimes it not easy for certain films. Even though I had to beg, steal and borrow locations I think it turned out pretty well but if you’re going to use difficult locations you’ve got to think outside the box because that old, historic church you dreamed of may not be available. We needed a school but struggled, so we used props, certain shots and getting the best from the actors to give the illusion of being in a school. If you want to make a no budget short you can’t set your heart on anything, you HAVE to be flexible!

Once I’d written my short I started to storyboard it out for direction and while it’s a good idea, once we started filming I used my intuition a lot more. As the writer I had more information than most because I knew what each character felt and their emotions. As much as a storyboard helps, when you’re filming you want the camera to capture that raw, precious emotion that can pop up anytime and it’s probably not on the storyboard. Use storyboards by all means but don’t make them your bible.

So that’s just some of my tips on making my latest short film and I cant thank the people who helped me enough on this project, without them there is no film. We’ve also managed to raise some money for NSPCC in the process so that makes it all worthwhile.

Looking forward I am about to embark on my next short to help gain funding for a feature I’ve written (www.onourown.co.uk) and all of the lessons above have been invaluable in making my next short even better, after all isn’t that what it’s about, learning from your mistakes, growing, moving forward.

One thing that is absolutely clear is you can’t do this filmmaking lark unless you enjoy it and you’re dedicated. How can you, the pays crap (zero), actually it’s probably minus zero but we won’t tell the wife that!

Live Feedback From The Guerilla Film Makers Masterclass With #GFilm Hashtag
Get a ton of filmmaking tips, tricks and articles every day
Top six ways to save money on your film
Has The Guerilla Filmmakers Handbook helped you make YOUR film? I want to hear from you...
Making low budget drama 'Legacy'

Who Murdered The Inventor Of Film and Why? New Documentary ‘The First Film’.
There is no conspiracy to keep good writers out of the industry