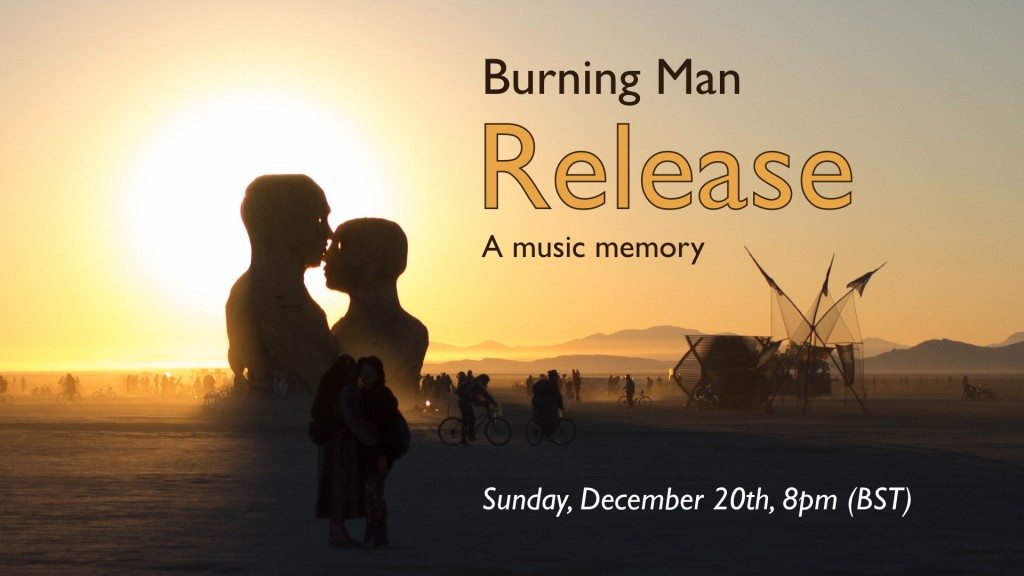 Tune in for Burning Man :: Release! which goes live on Sunday, December 20th at 8pm: http://ihippy.me/burning-man-release-is-live

18 months ago I (Mike) joined Camp Symposium and headed to Burning Man again, this time to co-create a camp and make a movie! I made a short Burning Man film in 2012 which was a test to see if a music memory could work.

You can see that first short here on YouTube (Burning Man Experience):

What I hadn’t counted on was extremely harsh desert winds and playa dust making its way into all my equipment; the difficulty of capturing the “moment” as well as “being in the moment”; assuming my DIY bike/DSLR steadicam rig would just “work” — it didn’t; and a host of other issues including accidentally pouring 1/2 bottle of vodka on the back of my Sony A7S.

My main goal with this short movie was to make the audience “feel” something — in this case the emotion of “release”. An idea I discussed recently with fellow filmmaker Chris Wickett is that a good movie needs to know what it is; one thing — and be that and nothing else! So Burning Man :: Release! is all about the build up to the burn of the man and then the eventual “release”. Release is the concept. Just that and nothing else.

1) Live the art! My good friend Stephen Follows advised me to “live the art!” What he meant was: don’t have the answer to your question right now i.e. at the time of asking it — that’ll just be you (Mike) in London in August (the time we were speaking in Bills, Holborn).   Instead, Stephen said “come up with a question” and then “live the answer at Burning Man. It will speak through your movie.” So I did just that. My question was “how do I create something non-narrative that makes people feel something?” The answer to how and which emotion: “Release!” came much… much later. 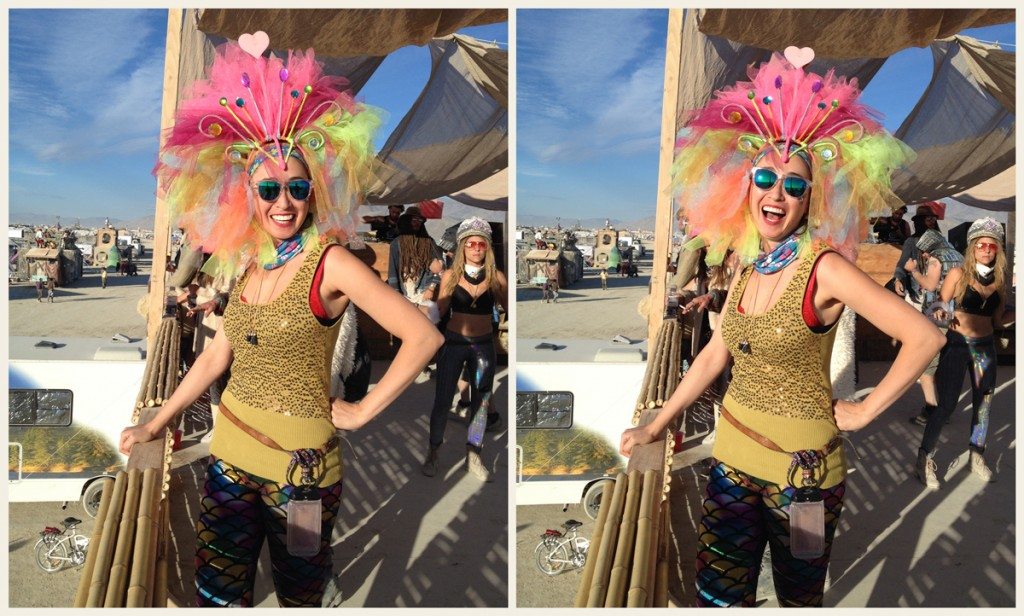 2) Choose the right camera for the job. I had my fancy Sony A7S that I had spent £5K on and I thought I’d use just that camera for the movie. Turns out that was a terrible idea. Thankfully I decided at the last minute to purchase a Go Pro Hero 3 and a pole. And also bring my iPhone. I used all three in the production.

The Sony A7S was perfect for tracking shots, beautiful images, night time and useless for just about everything else. The Go Pro 3 on a pole was great for the day time, a great way to capture “the moment” whenever it happened, anything that needed a quick setup and pretty awful for anything night time. Remember: with an adventure music video of this sort, you are not always staging reality, you are a part of reality. And sometimes a DSLR is exactly the wrong tool for the job.

The iPhone was great when all else failed. Batteries, data cards… they all succumbed to the playa dust… but my trusty iPhone saved the day in the end. You can sometimes forget that it records full 1080p HD video at 30 fps (and even 60 fps if you want it).

3) Stabilise all your footage first! I used to think that you do your edit and then you stabilise the footage. Turns out that Warp Stabiliser on Premiere Pro is so good you might as well just stabilise all your footage first and then see what you’ve got. Many a dodgy Go Pro shot was saved by Adobe Warp Stabiliser (https://helpx.adobe.com/after-effects/how-to/stabilize-footage.html). I found 10% smoothness, 35% Crop Less <—> Smooth More, Enhanced Reduction, Detailed Analysis to be a good starting point. 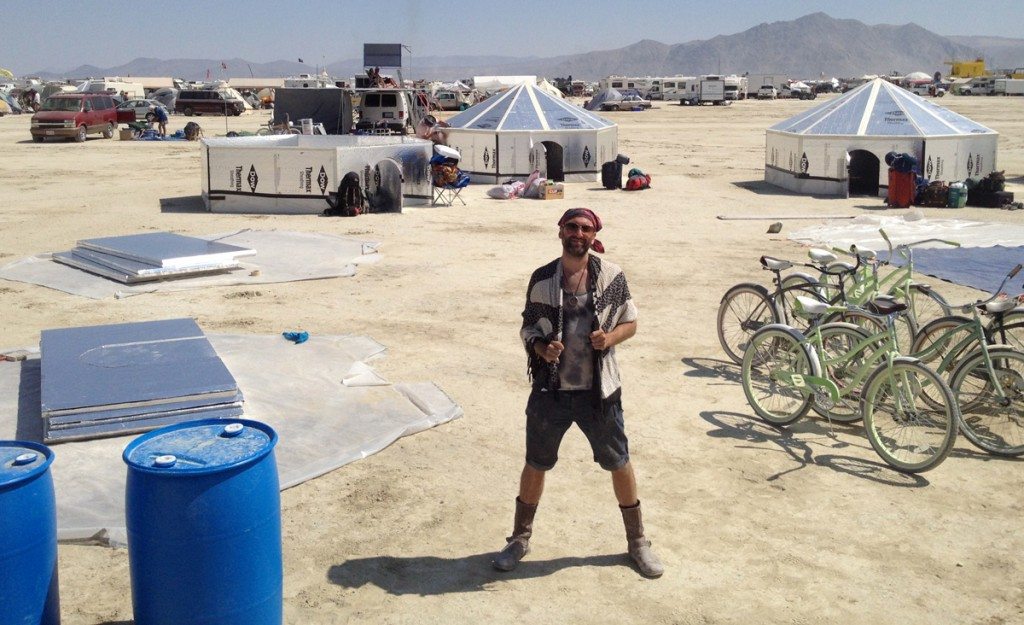 Another point about this. I’m always looking to find the magic in the footage. There’s a moment in the edit when I achieve lift off, when the viewer feels they’re actually part of what is being shown, not just watching pretty photos to music. For this, you need some purchase speed. Like when skiers aim down the mountain to get enough momentum so they don’t fall over. Purchase speed is required get the material to jump out the screen!

6) Have a rough assembly,  a fine assembly and then a fine cut.  This is so, so useful. I use the rough assembly to pull together all the photos and video clips I want to use, rejecting any that just don’t work. I use the fine assembly to order the clips only and not edit them, keeping the in and outs baggy. And only then do I lay down the music for the final tight cut. Yep, you read that right… the actual edit is 75% of the way through the process for me. I edit as late as I can. The worse thing I can do is to try and order and edit from the start… it makes for poorer movies.

Keep an eye out for the iconic!

7) Keep your eye out for the iconic. As I take shots I am always on the lookout for anything iconic (something strong which represents a given place or time). The dusk mask above is iconic as is the Burning Man itself and I add value to that sequence in the movie by also intercutting a flaming robot who looks like it is commenting on the burn. You never know when those kind of ideas can capture the public imagination and help your movie go viral and it’s good to include them. 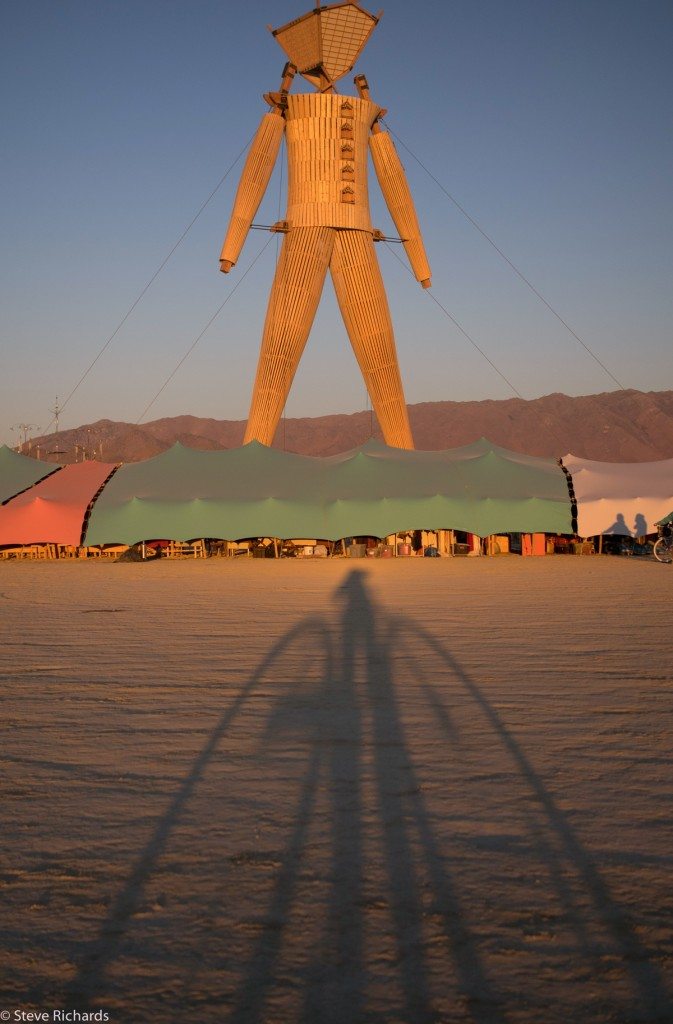 The man that burned

8) Every shot has a lifetime. Just like a scene in a movie, every shot has a beginning, middle and an end. There is often a moment when the shot turns, when the maximum energy is on screen and is being played out. So cut in late and cut out early! It helps keep up the momentum and the energy of the whole sequence and ultimately the whole movie.

9) Wait for the music that speaks to you. Not every tune will work with your sequence. I played over 100 Spotify tracks against my Avid Media Composer timeline. And there’s always a magic moment when the music and the footage speaks to me. You’ll know it because the hairs on the back of your neck raise up. That’s how you know when you have your tune.

10) Use a launch video! We live in an attention economy and getting that attention is priceless. I put up a launch video here (http://ihippy.me/burning-man-release-is-coming/) so people know an event is coming on Sunday 20th December at 8pm. It’s a little teaser with me introducing the idea along with a few clips to get people excited about the main event.

And finally a bonus tip #11 – Thunderclap your launch!

I found a very useful technique to get attention was to enter a network (in this case a dinner for entrepreneurs) and preview the movie. Then ask in a follow up email if people would mind Thunderclapping the movie to help get it out there.

Creating a Thunderclap simply means: you connect your Facebook/Twitter and get a “one time” automatic post at 8pm on Sunday night about Burning Man :: Release. When a few people do that (like 100 or so), it’s like a mini thunderclap across the internet to get attention. Here’s mine: https://www.thunderclap.it/projects/35775-burning-man-release?locale=en

It’s an acceptable practice because you are always adding value by showing the movie in advance and then making one small request… which is what (in my opinion) true marketing really is: the creating, communicating and delivery of value for customers and managing those customer relationships (https://www.ama.org/AboutAMA/Pages/Definition-of-Marketing.aspx).

And finally… the movie itself: http://ihippy.me/burning-man-release-is-live

Shooting 'Mad Max: Fury Road' with DP's John Seale and David Burr: 2 hour masterclass
Top Ten Tips For Making A Contract, a Film Makers and Producers Guide
Tactics To Get Produced: Podcast With Prolific Brit Producer Paul Webster
How to Turn Your Followers into Doers... How I did it in my Fantasy Epic by Kate Madison
Camaraderie, focus and chemical addiction - are you an addict?

Star Wars: The Force Awakes European Premiere
One Create50 horror story of how a writer lost their script… completely