I had worked with director Chris Jones previously and he called and asked if I was available and explained that there would be four days of principal photography with an additional pickup day later in the process.

We would finish editing an episode a week, then grading and mixing later in the week for our Monday deadline and release. I was putting together all the episodes simultaneously on my own and would then meet up with Chris to refine the next episode to release. Once Chris and I were happy with an episode, we would show it to Glen Scrivener from ‘Speak Life’ for his feedback, so from my perspective as the editor, there was a kind of two-step approval process before an episode could be ‘locked.’ This meant getting to a first cut very quickly and keeping my project organised so I could quickly address notes from Chris and Glen and allow myself to focus on the story and characters. With no time to waste, this is the how I setup and executed the editing process on ‘Meet The Nativity.’

Assistant Editor Hannah Leckey prepared all of the dailies. I like to edit from sequences and have each setup a different colour in the sequence so it’s very easy for me to look at a scene and see how much I’m using the wide, close, POVs etc. and if I need to go back to the dailies for more options I can see that ‘I’ve got four yellow ones’ or four medium shots of this character, for example. I find it much easier wrapping my head around all the footage when it’s laid out in a sequence, rather than thumbnails in a bin.

I also do have scene bins prepared so I can see little thumbnails and understand the coverage I have to work with but once I start editing, I’m going from the dailies rolls. 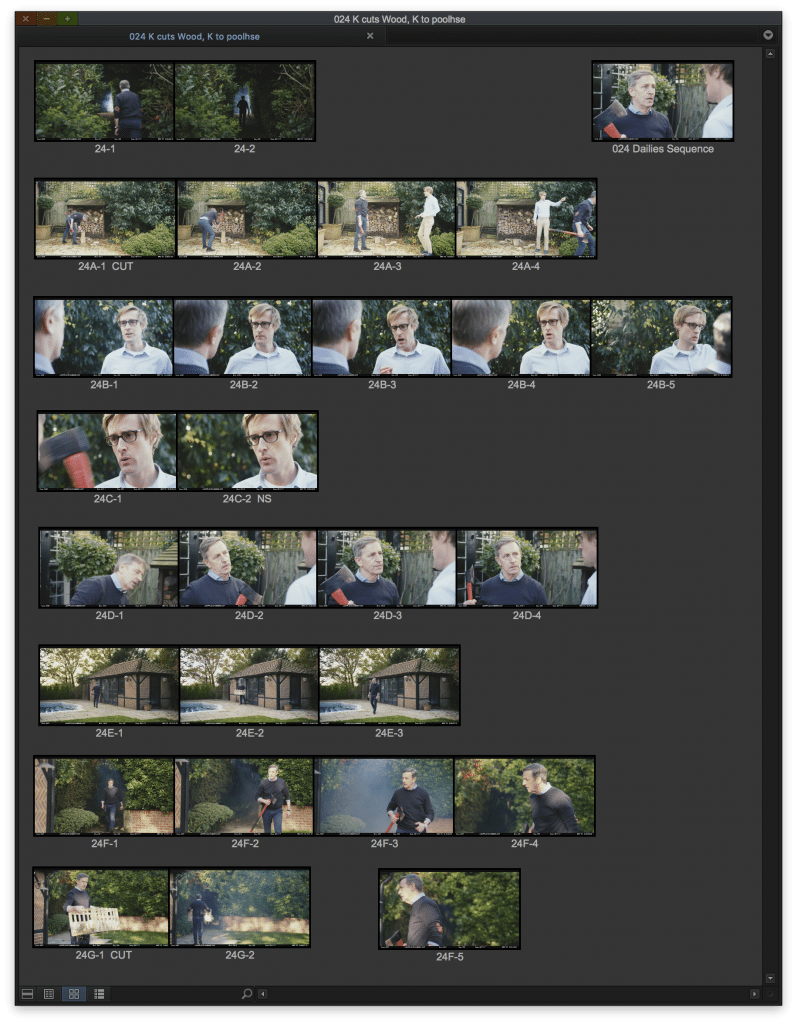 And when I look at a timeline of the entire film, I can see how long each scene is relative to each other which is very helpful for examining the pacing and structure of a film.

I almost always begin editing a scene simply by using one of the selected takes, or the last take or something. Usually the second or last takes tend to be the best. I’ll edit the scene very quickly without properly going through the footage just to try and understand what it’s about and discover the strengths and weaknesses of the scene and very quickly I can have an informed conversation with the director about what works and what doesn’t – at least there is something on the screen. After the initial assembly, I will then go back and look at all of the footage and now I have a better idea of what problems I need to solve and I can watch everything with more of a point of view. I do eventually watch every frame – it would be irresponsible not to – but this way I already have my head around the coverage and I can get my first cut much more quickly. I’ll then swap out performances if and when I find better takes and if there is anything that stands out – a good look, reaction, movement – whatever it is, I’ll cut it onto my timeline at the end so I don’t forget about it and once I go back and tidy up the scene even more, I’ll think about potential places to put any cool moments that I really want the audience to see. I am quite happy to make a mess while I’m assembling and choosing my favourite bits. Sometimes things that ordinarily would never go together get juxtaposed by accident and that can spark some creative ideas sometimes. Once the first cut is done however, my timelines stay very neat and organised. It’s very helpful when working with a director to easily make complicated edits and trims without knocking things out of sync, punching holes in the music or atmos tracks. I like to be able to hit play at any time and know that whatever is about to play will be presentable. I don’t like working with a director and then spending ages patching things up after they leave.

Luckily Chris is very good at imagining what the final film will be like, however I think directors, especially these days have come to expect a bit more polish, even on first cuts. No longer can we simply edit picture and track – everything I show will always have a basic sound and VFX pass and ideally music as well, if I’m allowed. Some directors I’ve worked with won’t watch anything with temp music and others refuse to watch a scene without it. Luckily Chris is happy with temp music, which I like because it makes me look good..! Music can elevate a scene so much. With this in mind, I never put music on until I’m happy that the scene is working well on it’s own. It’s important to only use it as icing on the cake, not as a crutch to hide poor editing or story problems. I do like to put it on before showing others but it’s usually the last thing I do before presenting a scene. It’s very important to me that whenever I play back for a director, I’m showing them a reasonable representation of their film and giving them confidence in its’ potential, especially when working with new directors. The less they have to imagine, the better. With Chris I also cut quite tightly to begin with – I don’t really assemble scenes with lots of ‘air’ in them – I just cut them the way I imagine them being in the film, and even then they still often get quite a bit tighter before they’re finished. That certainly happened a lot on “Meet The Nativity.”

At the end of the day, it’s all about storytelling. Crafting a film that makes sense, that pleases the audience, that is engaging. We want the audience to get to know our characters and care about what’s going to happen. With editing we are using shots to create energy, reveal scale and geography and make the audience feel as if they were there. For me, Media Composer is the most robust tool that lets me get the ideas in my head onto the screen as quickly as possible.

How to recut and remix your film… a terrific example
Meet The Nativity Wins 'Best Festival' Film at 22nd Jerusalem Awards at BAFTA
Getting Edit Notes From The Producer: Top Ten Tips
Seven Editorial Tips For Fine Cutting Films
Picture Locking ‘Seeing Him’
Creating the magic of the Nativity... on a shoestring

What can we learn from 15 second horror winner ‘Emma’?
Making Feature Films For No Money: How I Made My “★★★★ Intense and Tender Psychological Thriller” and Premiered in London’s West End