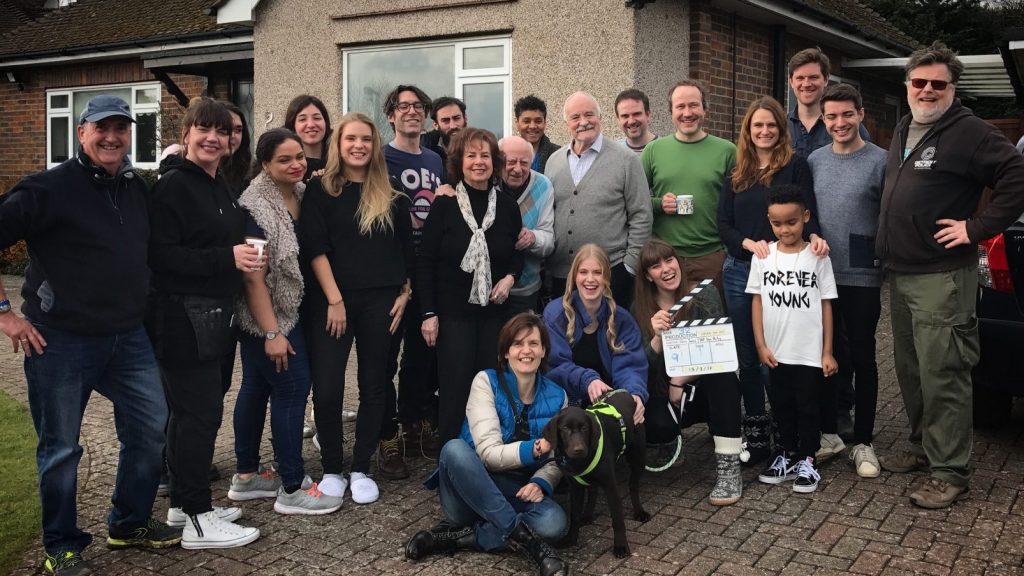 Last week I directed an extraordinarily ambitious short drama for a charity. You will hear more about it in the Winter as it’s a Christmas family film.

Stupidly, on this project we broke all the long established and sensible rules.

It had kids. Lots of kids.

It had a story spanning five decades.

It was a hard six day shoot that we needed to squeeze into a seemingly impossible four day shoot due to the budget.

It had night shoots.

It even had snow!

As a filmmaker I was pushed to the limit. But then, on reflection, every film should push us to the limit I feel. Otherwise we are not maximising our opportunities and pushing ourselves to grow. Never phone it in. Never.

In the few brief breathers on set I contemplated what was happening and how, astonishingly, I was staying on top of it all and not, literally and figuratively, loosing the plot.

I want to share in a series of blog posts, what I believe to be some of the defining strategies and choices needed to make a low budget film. Not so much simple tips and tricks, more deep strategy and attitude, the stuff that will keep us all afloat amidst the battle to shoot our masterpieces… And we must always believe we are making a masterpiece. 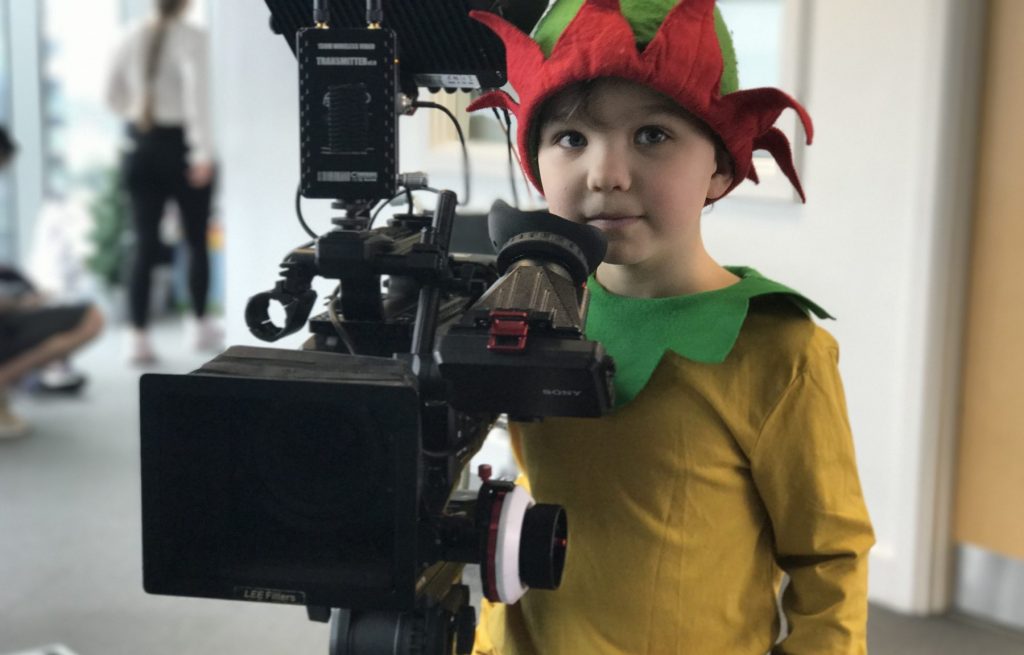 Often, when all hell is breaking loose, we need to think on our feet and make radical decisions in the moment. And we need to be right.

As a director, we don’t choose this as a strategy going in. It just happens as actors fall through, schedules slip, locations turn out differently, it rains… yada yada.

How can we make these spur of the moment choices that radically impact the script, and always make the right choice?

How can we bend with the wind and never snap?

In this instance, knowledge is power.

Knowing the script and story intimately will be your greatest ally. Whenever I found myself at the crossroads of ‘the old plan having gone to shit for reasons beyond almost everyones control’, and the ‘new direction thrust upon us’, I would ask myself, what is in the DNA of this scene? What must happen? Why? What is the single most important thing? And how can we achieve that with the resources at hand?

Can characters be combined or switched? Can scenes be merged in order to clawback some schedule? Can that three page scene be reduced to a quarter page? The famous Indiana Jones sword fight is a good example of this.

Surprisingly, the answer will almost always presents itself and often, it can be an improvement on what was written.

This happens because we know deep inside, what we need to get from the scene. Experience, and a great team surrounding us, a familiar team, also make these often inevitable shifts in direction much easier.

This process in itself can reduce (and that’s a good thing) a screenplay that is over written into a leaner, tighter more focused piece of drama.

But you MUST know what is in the DNA of the scene so that IF you are forced to abandon setting, sometimes characters, and find you no longer have the ability to shoot great coverage (there is only time for one shot and not the four you planned etc)… Then you KNOW what to do, instinctively, elegantly and with confidence.

On the last day of the shoot just gone, we had a problem. A big problem. The last scene was a flashback to 1967 in a new location, a home at Christmas. We had planned it in one location, shooting what we needed to shoot in 2018 over a couple of days, then dressing one room to look like 1967. The room we had was perfect.

Of course that location dropped through just before we started shooting. The new location was even better for the 2018 scenes, but once we got there, it was clear it would never work for our 1967 scenes, no matter how skilled the dressing.

The production team worked the street, knocking on doors and charming people, but we came up short.

What can we do?

Let’s change the location of the drama. Where else could it happen?

In the garden? Possibly, but it’s a bit weird.

What’s in the DNA? What MUST happen?

In the story, the father character injures his foot and cannot walk. This happens on the way to a childrens ward in a hospital where he plays Father Christmas every year. What to do? He cannot let the kids down. Who else could play Father Christmas? His son… And so the his son, the lead character in the film, becomes a reluctant Father Christmas.

That’s the DNA. That’s what MUST happen.

What if we get an old car, a car from 1967, and shoot it at night so we cannot see the house clearly? That would be a great setting and would work for the period.

What if the mother character slams the car door on the fathers foot? That would work.

What if the whole scene plays out in and around the car? 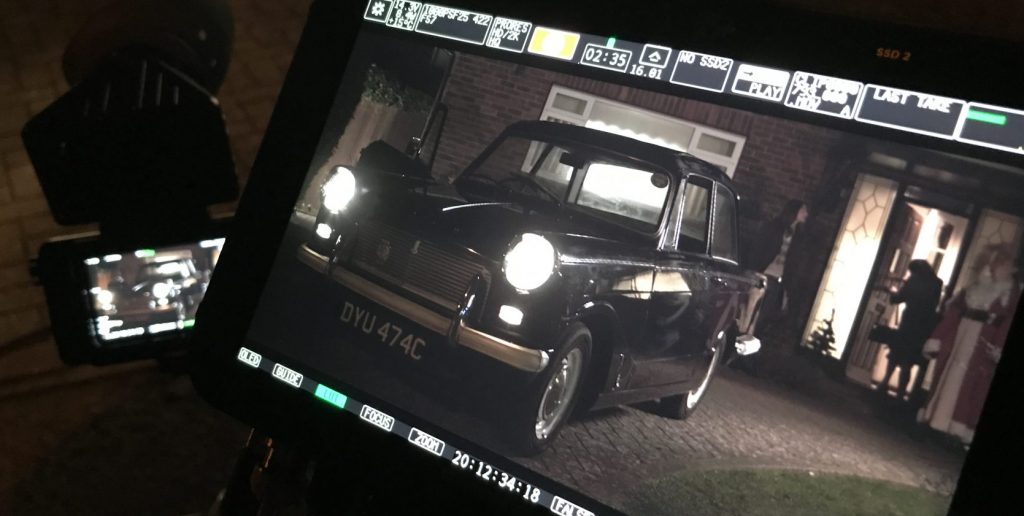 BOOM! A few hours later and Judy had found several options for old cars and later that day, against all odds, we shot it.

The ability to convey this new vision to the cast and crew is essential too. You must be able to present this new version with certainty, And you can and will IF you know in your heart that you have delivered on the core needs of the scene.

The cast and crew are looking for certainty in their leader. Remember this. It’s fundamental. Make it look effortless too, like you are in complete control. Always.

Above all, take a GREAT script to set, Then trust what is written on the page. It will save your film if you do this.

I cannot tell you how many times I have found myself in a situation that was unplanned and with no immediate strategy to fix it. What to do?

Shoot the DNA of the script.

Because the script worked BEFORE the shoot. It will work after the shoot.

This is not licence to rewrite on set, this is about refining the script on set.

Rewrite at your peril. Writing is hard enough when there are no production pressures and endless days to get it right, let alone 32 minutes over lunch. And major changes often have often and unforeseen consequences that only appear in the edit.

Trust the script. Dig deep to find the DNA, and shoot that.

One simple mistake that many new directors make that renders it near impossible to get hir...
And it was all going so well... Or was it? Filmmakers, Screenwriters, Creatives... Are you...
Chasing the dream? How to lead like a crazy person
Watch the Behind The Scenes From The President Speaks Shoot in the Oval Office
Three L’s: Lens, Light and Location... Advice For Filmmakers from Christopher McQuarrie