Last Friday we shot the opening scene of The Impact, written by Joe Eszterhas and starring Olivia Williams. We shot in an extraordinary White House Oval Office reconstruction in Norfolk at RAF Coltishall in the sets owned by October Films.


This new Presidential scene will be an extraordinary opening for The Impact50 and the cast and crew have truly elevated the whole project, along with all the filmmakers whose films are now coming in daily.

It was a long day, starting at 4am and ending at midnight for me, but what a rush to direct in such an iconic location and with such worldclass talent.

I am particularly delighted with the opening shot, a cinematic and stylised long dolly backwards in ultra slow motion as the president takes onboard that the planet has less than two hours left. It should set the scene with some gravity for the films that follow. 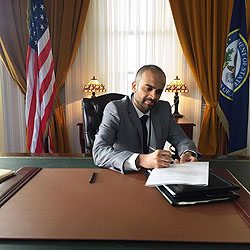 Of course this being the White House set, everyone HAD to have a selfie behind the desk, Omar winning the prize for best photo.

Please do consider contributing to the Crowdfund, it REALLY will make a HUGE difference. And thank you in advance.

The Watchers: Our Long Journey Into Space for #Impact50
Create50: How this all began and the magical throughline of creativity…
Film Directing Fundamentals Part One... Map the DNA of your screenplay so you can bend wit...
What materials do you need to enter a film festival?
Watch The Complete Impact50 Awards from Create50

The Impact50 Trailer Has Been Launched… Get involved and make your micro-budget apocalyptic short
Shooting Killer Action Scenes With a Crew Of Three… Filmmaking for the Crack!