Playing to your strengths and embracing your limitations helps get your film made, and making it fun.

My name is Jude Poyer, I’m a stunt coordinator and action designer from London, England, and I’m an action movie addict.

Less than two weeks ago, before we’d even started shooting “Drug Den Master”, I never imagined being asked to write a blog entry about it.  “Drug Den Master” was a low budget passion project. Two stuntmen friends and I conceived it as a love letter to the kinds of movies we grew up watching. Any exposure I might get out of it as an action director, or the boys as fight performers, was secondary. We wanted to have fun, and hopefully reach a few folks who would be entertained too. 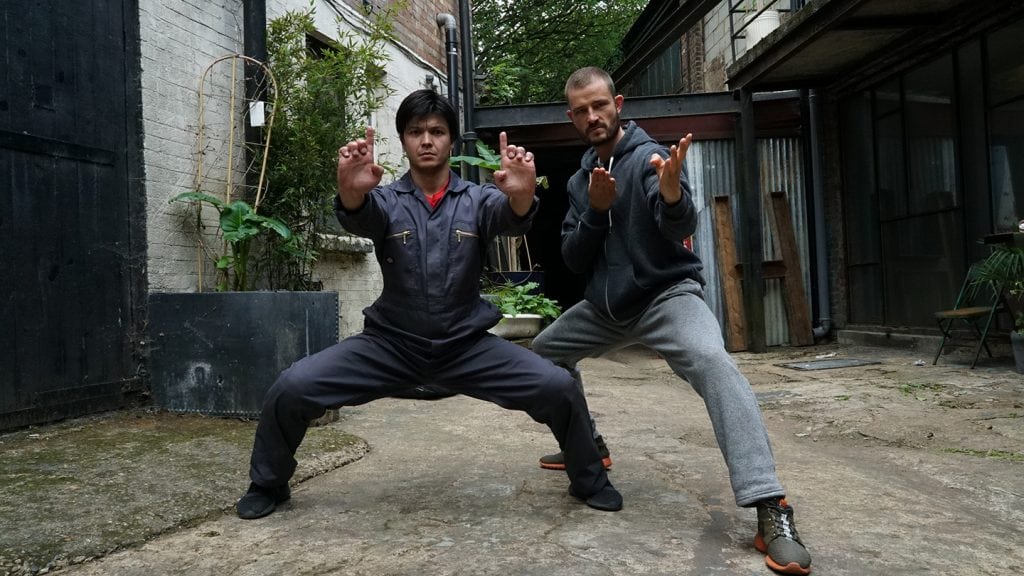 This wasn’t intended for festivals. This was destined for Facebook & YouTube, so the mission brief was different from something with higher aspirations. It needed to be short (under 3mins 30), pacey, and considering it would most likely be viewed on phones & laptops, didn’t justify a lengthy post-production. So it was shot, edited, coloured and online in under a week.

This was self-funded, and not for profit.  The budget was low. The main expense was renting the location. Other spends were costumes (Primark) and props like crack pipes (Amazon) and a medical spine (Ebay). We couldn’t afford, nor did we want a large crew. Action tends to require lots of camera set ups. A large crew would have slowed us down. Most of the time, just the 3 of us were on set. Some of the time a friend, Chris G.R. Webb was able to help out with general mucking in, as well as performing as a punching hand and bicep double.

I’m no DOP. Operating camera myself without an AC would mean some shots would likely turn out soft or poorly exposed. The three of us decided to embrace the budgetary & technical shortcomings. We weren’t trying to emulate a James Cameron movie. This was paying homage to kung fu movies of the late 70s, which were often cheaply made, and shown in fleapits on damaged prints, with dodgy subtitles and/or comedic dubbing.

My two performers are professional stuntmen. Both have worked extensively in Asia. Andrei is a member of the British Stunt Register. In addition to movies, Craig performs motion capture for best-selling video games. My background as a stunt performer, now coordinator, started with 8 years in Hong Kong.

We all are fans of the Hong Kong approach to action, which is to avoid master shots and coverage. Editing can be an art where the “form” is found during the editing process, but in our humble opinion, for stylised martial arts action it’s usually far better to “shoot for the edit”, Hong Kong montage style. 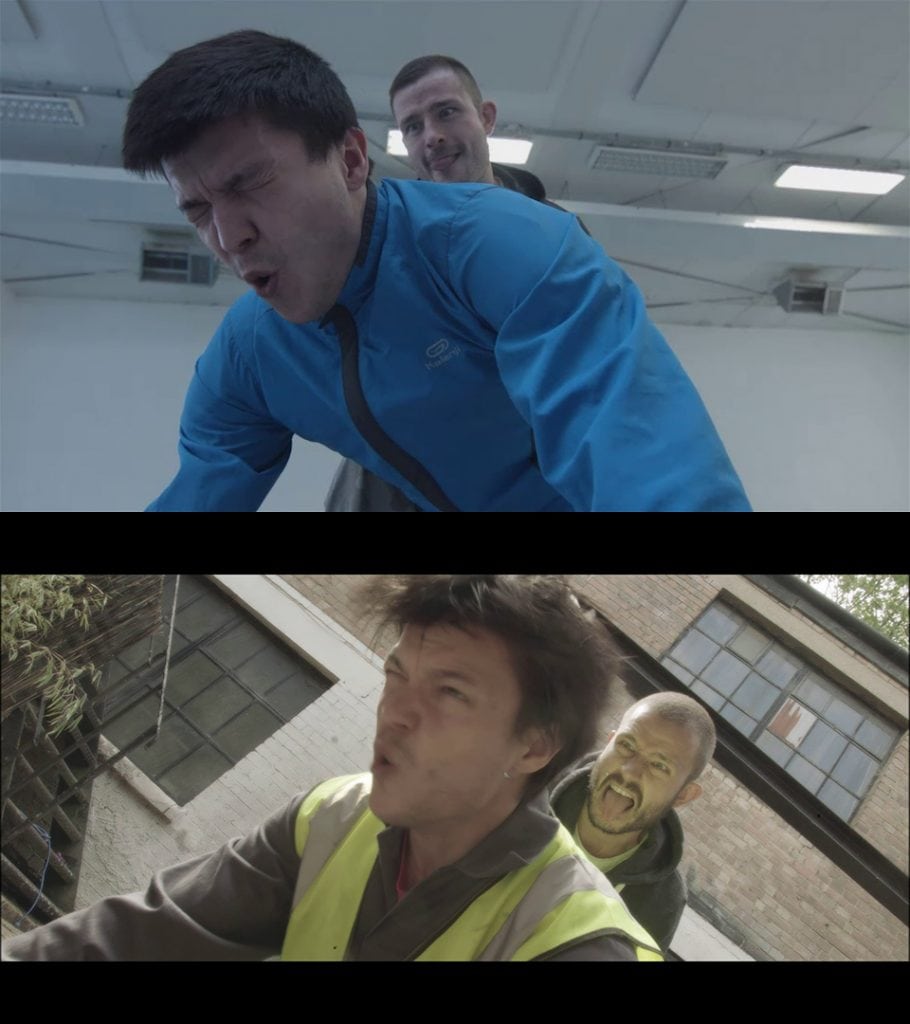 Every edit, camera move, angle, lens choice, speed and shutter angle is motivated and planned for to serve the action.  I find this approach almost always leads to more dynamic, exciting action. It’s also much easier for the performers to work this way.

Rather than have to perform a long piece of choreography over and over for multiple angles, they know that each “bite size” piece of action for a particular shot is all they will need to perform, so long as the last move overlaps with the first move of the next shot. They are required to remember less choreography, and can perform with more precision, speed and energy, knowing how to “sell” it for that particular angle.

We actually rehearsed and blocked most of the choreography for “Drug Den Master”, some time ago, in a sports centre. On that day I shot previz of much of the key action.

Previz is such a useful tool for planning action. I could try different angles, lenses and speeds, and edit the best version possible. This previz was the blueprint we followed once on location. Previz eliminates the time wasting practice of “will that work…?” or “what if we tried…?” once you are properly shooting. 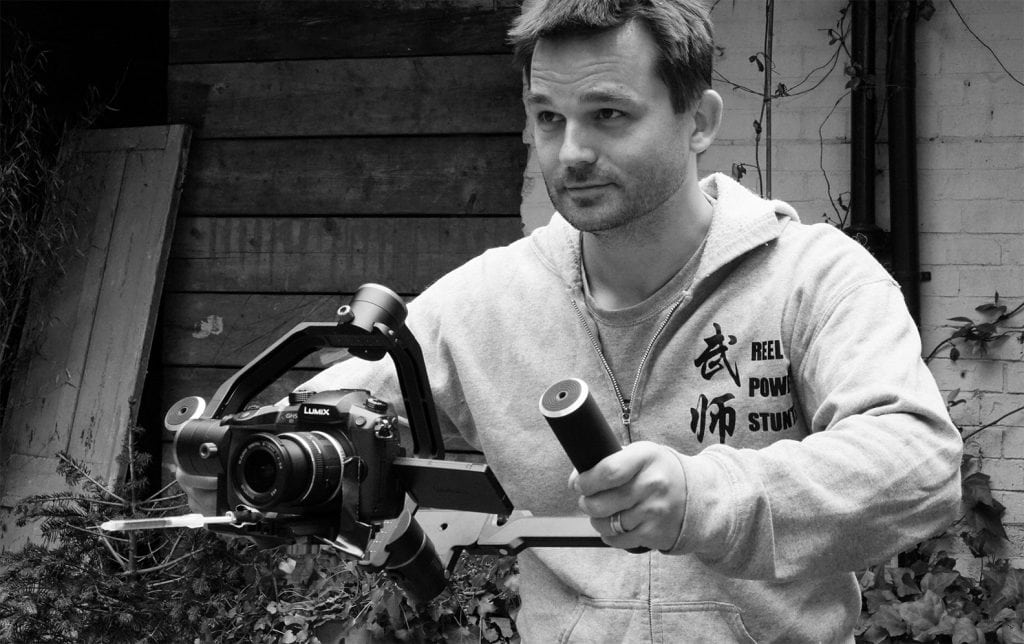 Most of the short was shot on a Black Magic Ursa Mini pro in Prores 444. I’m a big fan of the Ursa’s Film picture profile, which requires little grading to provide pleasing, filmlike images.

The “flying needle POV” and a couple of other shots were captured on a Panasonic GH5s on a Feiyu Tech A2000 gimbal.  A handful of longlens  shots & crash zooms required tripod use, but the majority of action was shot handheld, often using a Fig Rig. Last year I had the pleasure of working as Fight Coordinator on “Apostle”, the new film from director Gareth Evans (“The Raid” movies) and saw firsthand how well-suited to action the Fig Rig can be. It’s not a replacement for a Steadicam or a gimbal, it has its own look and uses, and can make handheld shooting not look like you are emulating Paul Greengrass’ shakycam effect.

I felt we could have shot the short in 2 days, but in the UK on professional movies constantly we experience not enough time is allocated to properly execute fight scenes. We wanted the luxury of not feeling rushed or compromised, so booked the location for three days. When we filmed, our pace was steady, but never hurried. Often, after several setups, we’d stop so the guys could rest and I could assemble the edit.  By the end of day 2 we had a finished assembly. So on day 3 we only shot a few hours,  having the luxury of reshooting a couple of shots we thought could be executed better, & adding an extra shot which helped a piece of action flow. If you can, I’d strongly suggest editing action as you go, & allocate time to minor reshooting and pickups. That final half day we also had a friend, Tom Cheshire, take some behind the scenes shots & posed photos.

So by day 3 we already had a 95% complete edit, which was done in Adobe Premiere Pro on a Dell Precision mobile workstation (laptop). Over the next day or so, I worked on little tweaks and adjustments to the edit points and adding the sounds. All of the fight noises and foley came from the movie “Drunken Master”. A recent bluray release contained the M&E mix on one track, and that was a very useful resource. Voices came mostly from an old English dub of the film. 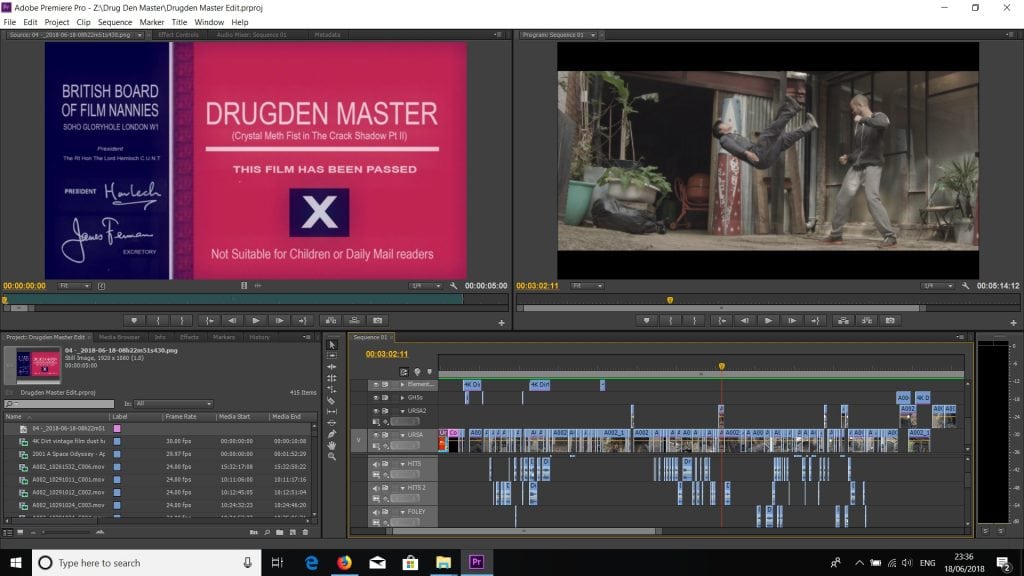 I’d always planned to deliver the movie in 1080p HD, with a “letterbox” mask, so edited in a Full HD 24fps timeline.  We shot in 4K though, as the extra resolution made reframing in post and getting 2 frame sizes from one setup possible. The idea of moves in post or “punching in” 50% might offend some cinematography purists, but time constraints mean sometimes you do in post what you can’t do on set. As far as I’m concerned, with shots lasting a second or two, a minor drop in resolution is OK, so long as it makes for a better action experience.

Colour grading was done in Premiere. The damaged film effects were achieved using the Magic Bullet Misfire effect plugin, and by overlaying videos found on Youtube of dust specs against black which, was keyed out.

The final piece of the puzzle was a VFX shot of Andrei’s under-the-influence eyes and veins bulging. Andrei worked on this effect himself in After Effects and Mocha, delivering the rendered shot as a TIFF image sequence. Once this was dropped into the timeline, I left the computer to render and export overnight. 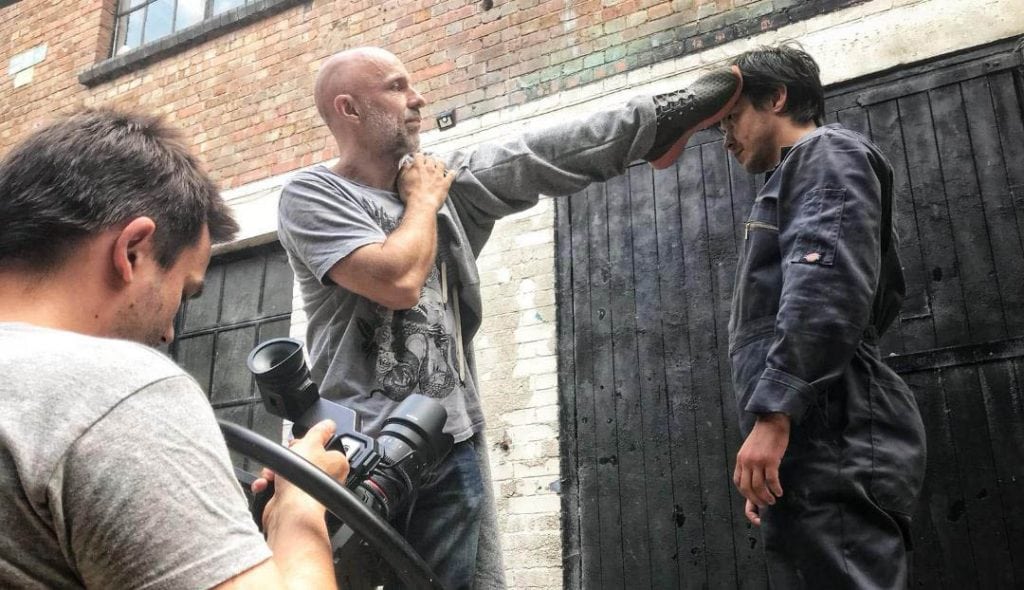 The finished short was uploaded to Facebook a week after we started shooting with no significant push. We’ve been bowled over by the number of shares, likes and comments. It seems to have resonated with a lot of people (mainly men who rented kung fu and action movies on VHS in the 80s & 90s). It’s very gratifying to see our silly little short being enjoyed.

If you’ve got this far, thank you for reading.  We hope you enjoy the short too.

Top Ten Kick Ass Tips For Shooting Action Horror From 'Zomblies' Director Dave Reynolds
The ONE thing I needed to get right for Urban Ghost Story... BTS on the stunts
Stunt Co-ordinator gets onboard