Most filmmakers think they have. Not all do. But Simon Cox does.

Simon spent nearly two decades making his passion project, a movie postcard back to the kid inside him, the one who fell in love with movies and big concept TV of the seventies. It’s called ‘Invasion Planet Earth’. It’s BIG!

I was involved only in an adjacent way, a close friend, sometimes adviser, often confidant… but I did see it through from concept to today. And what a ride it’s been.

I saw it grow to a ten million dollar epic, collapse into a heap, get reborn into an even bigger project, before again collapsing… Promises were broken, funding never came through… It was heart breaking.

Having had enough of OTHER people controlling his destiny, Simon drew a line in the sand and said ‘Enough… It’s going to get MY way…’

And so, the decades long production process began.

Family and friends and anyone crazy enough to follow the maniacal vision all buckled up for the ride. To give you perspective, his daughters are in the film, playing different characters. They grew SO much during the years of filming, that they looked totally different!

On long drives I would chat with Simon as he watched the blue render bar of After Effects nudge up 1% every half hour… Simon had to learn to do his own VFX when he had no budget. Plans were laid for distribution and sales. Plots were hatched. 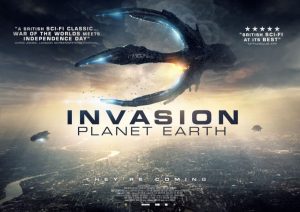 And finally now, the film is in cinemas for ONE DAY only, on December 5th. Check out the listings on myvue.com and PLEASE go see it on that one day. It will NOT be playing on December the 6th.

So… if you want to see what a decades worth of grit, passion and leadership can achieve, with little and often no resources above personal charisma and hustle… Do yourself a favour and go see ‘Invasion Planet Earth’. I plan to be at the Shepherds Bush screening so look out for me there.

The Essential Low Budget Film Makers Sales Agent and Distributor Delivery List
HMV and Blockbuster deserved to fail
Self Distribution for UK Filmmakers - what are the two KEY relationships you MUST nail?
How You Can Define Success for Your No-Budget Guerrilla Film by Brian Barnes
Dynamo Player shuts down.
Demystifying Distribution: Real World New Distro Case Study Strategy and Tactics

Joker… Does YOUR antagonist go on their heros journey into hell?
Stephen King and George RR Martin in conversation… Seriously!