Well, both yes and no.

The old adage used to be, ‘shit in, shit out’. And that’s still true. Kinda.

I have been experimenting with a tool from Topaz Labs called Video Enhance AI. It takes in old footage, typically say Standard Definition video, and then up-scales it to HD, 2k, 4k, whatever you like. It can also double frame rates from say 25fps to 50fps as well as de-interlace rather well. None of this is new, but where Topaz is different to other tools, is they claim to leverage AI to kind of create the missing data when it’s up-scaled.

As I had a few videos on my blog from many years ago, I thought I would pass them through to see what comes out the other end. So far I have done a Behind the Scenes from a Calendar Girls Shoot and one from the Rhode Island Film Festival journey with Gone Fishing.

In some ways the results are impressive. In others, some may struggle to see much difference if any.

Above is the export from Topaz of a Behind The Scenes I made for a music video I made in 2008. It was shot in MiniDV PAL (shot fake progressive as the files are in fact interlaced). The video above is the one that Topaz exported (note, I am using settings that I settled on after lots of tests, there may be better settings to choose).

Below is a side by side comparison of the two – the original SD on the left and the new HD on the right.


It’s frustratingly hard to see the difference above, but trust me, it’s there. It’s also worth remembering this is a compressed MP4 (now in HD) and Vimeo will have added its own recompression in order than I can host it here.

The Interface for Topaz is pretty simple, input on the left, out put on the right. And there’s a load of different presets you can play with on the left. I have mainly used a preset that de-interlaces, up-scales to 1080p and renders out at 50fps. 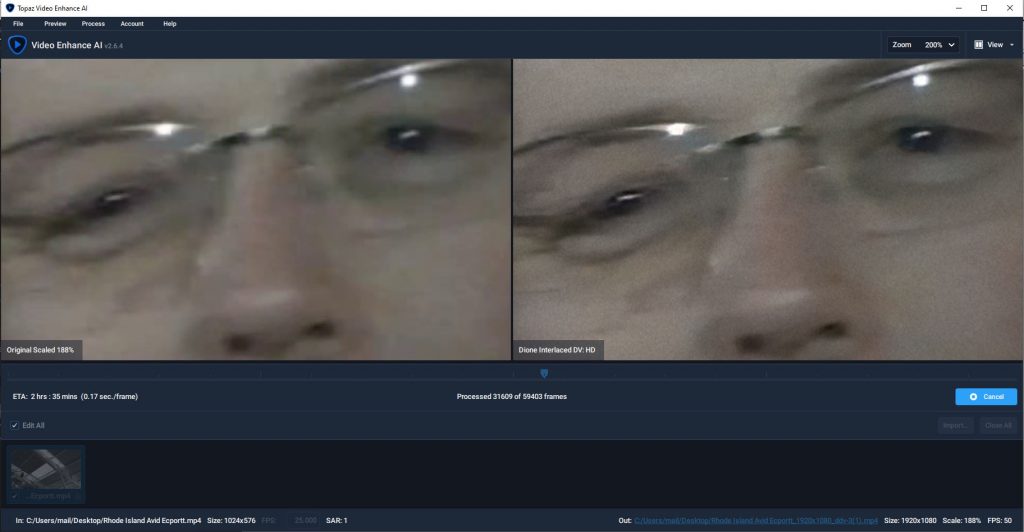 I was also working directly from the original Avid project, so the video files were technically the same as the DV tape files, so the input material was as good as it could possibly be.

What I have learned…

You can get it (and also download a free trial) HERE.

At some point I plan to take a look at my early feature films too. I only have SD versions of these so it could really bring them to life. As a first test I just did the trailer for Urban Ghost Story, shot on Super16mm and transfered in 16:9 on Digibeta, back in the day. You can see it below..


Let me know what you think.

Dragons, Reapers and Guerilla Filmmaking: Turning Writer to Director With My First Short ‘...
What materials do you need to enter a film festival?