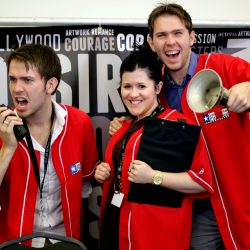 Past LSF team creatives The Clarkson Twins and Gemma Hurley, are putting on a show…! I asked Michael to share what he had learned about breaking into comedy via fringe theater… Over to Michael… Hello there! Michael Clarkson here. If you’ve ever attended the London Screenwriters’ Festival and pitched at the Great British Pitchfest, you […]