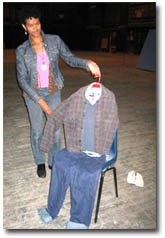 Late last night I had my second big meeting with Costume Designer, Linda Haysman. We were checking over the costume for the two young boy characters in the story. Mainly Young Bill, played by Devon Murray.

We had worked quite hard to stay within a selected colour palette that would co-ordinate well wit the colours agreed with Production Designer Emily Johnson, and I liked very much what I saw. It felt timeless and much more designed than your usually thrown on clothes on a low budget shoot.

Of course Linda has many problems most of us don’t even consider. Hiring actors late means she can’t ‘fit’ them until the eleventh hour, and what if it doesn’t fit? Or the actor doesn’t like it? It just feels wrong when worn? Whether actors are late to get on board because of the production, or because agents won’t commit to ‘no/low money’ until the last minute, the impact is the same. For Devon, the real challenge is that he flies in on Saturday and we shoot on Sunday! No fitting at all before we shoot!

We also have the problem of this being a film which has period flashbacks, set in the 50’s. And it’s near impossible to get doubles for clothes in that case, which means shooting with a stand in, or in our case, shooting when clothes get wet, is a serious issue.

I really hope we can get a commitment from our lead actor today so that we can get Linda on the case with him. This is becoming a really serious issue for us.

The vice is really squeezing everyone now. The design team is showing signs of stress, the production team started at 7am yesterday and didn’t leave their computers until late at night. There is so much to do and so little time to do it.

Watch our set go up!
Casting Coming Together