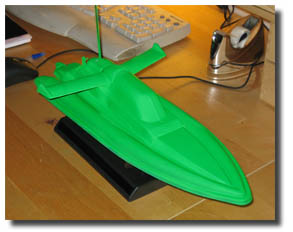 I have been working out how do some of the visual effects for ‘Gone Fishing’. Of course having no money, it’s a sellotape and string affair. But, I now have recieved tremendous support from a special effects company called Men From Mars. These digital effects guys are real wizards and usually work on $50m movies, but they have agreed to help out on GF! Blimey!

I have been worried about the shots where the giant pike swims away from shore having escaped capture attempt after capture attempt. In an effort to do everything practically and not rely of effects in post, I had been working on underwater rigs that were pulled fast, to create a ripple in the water. But I was having problems and so thought I would ask the Men From Mars guys what there take would be…

‘Why not shoot a radio controlled boat which we then paint out?’

Brilliant! So, what we will do is shoot the boat in the water, creating ripples – which I have now sprayed green (in the pic) – and then shoot a second ‘clean’ plate with no boat. The boat will be digitally removed to reveal the clean plate below, effectively giving the impression of water ripples but nothing on the surface making them. We may need to add a digital fish fin later, but I am hopeful that we will need to do minimal digital work.

Fantastic! We will be doing our first tests in the next few days at the lake location.

Dick Smith, legendary makeup artist has died, his legacy for me, cannot be underaterd
How I made a SciFi Epic Film on a shoestring... Making KIDDO
The ONE thing I needed to get right for Urban Ghost Story... BTS on the stunts
Do you love old school practical visual effects and their artists? Rick Baker, Rob Bottin,...
Grading 35mm
Sound Recordist, Killer Pike and Killer Bunnies!