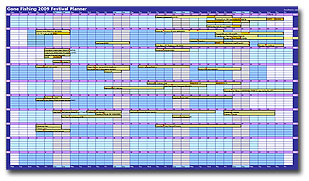 Well it’s nearly complete. The problem is that I keep getting invites to more festivals, and so, like the making and selling of a film itself, it just keeps going on and on. I am not complaining as it is a fabulous distraction to be invited to wonderful festivals around the world, but it’s not going to get the next movie made!

OK, so I wrote a few months ago on the blog, about the ongoing festival campaign and the spreadsheet we put together – but the data at that time was incomplete. As the main push for Gone Fishing has now ended, I thought I should tally up that data and share it – so here it is.

All in all, we entered 139 festivals… Of those festivals we were rejected from 66. That gives us a success rate of just under half at 47.5%.

And of those 73 festivals we got accepted into, we won an award at 28 (sometimes we won multiple awards, giving us wins closer to forty), resulting in a ‘win award’ rate of around 38% (that’s of the festivals we actually got into remember – overall, if you consider every festival we entered, we had a win / success rate of just over 20%).

This figure is slightly skewed as not all festivals were competitive, but most were. Without doing a lot of number crunching and head scratching I can’t give you an exact figure, but I would geusstimate that about 10% of all the festivals entered were non competitive. 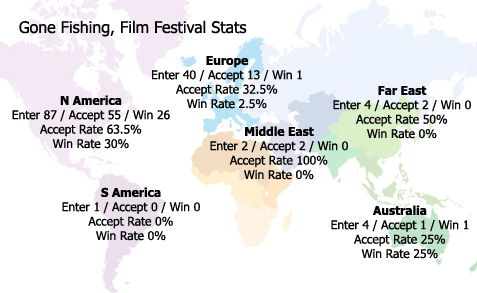 Now the really interesting stats come from WHERE we were accepted. The map shows we were hugely popular in the USA, but not so popular in Europe. In fact in the UK, we have only played officially in two festivals, being rejected from the others we entered – this trend began with Edinburgh 2008 who declined our world premiere (also note that one fest, the United Film Fest, is a touring festival out of the USA so I don’t count that one). I also know there are a couple of UK festivals that are not in the sheet because I dealt with them before we started logging everything in detail in a spreadsheet, often by handing someone at a festival a DVD and a form – for instance the Leeds Film festival is not in the sheet and I did apply there and heard nothing back.

In the first instance I wanted the world premiere to take place in the UK, but was met with some indifference from UK festivals and so ended up premiering in Rhode Island (which I am glad we did – if you have not seen the nail biting video blog of this, check it out below)

Of all the figures, only Europe and USA really have enough data to display any kind meaningful trend…

Quite a distinction. I can say with some certainty that American audiences warmed to Gone Fishing, were Europe was far less enthusiastic. Anecdotally, that was also my experience at the coal face while attending festivals.

We spent around £3,000 on festival submissions, which I funded myself, and continue to fund from sales of the DVD. And as most short film festivals don’t cover expenses, I had to pay for air travel and accommodation when there – so again, I guesstimate a further £3,000 on expenses (though I did manage to run some workshops at some festivals to claw some costs back, and also lived rent free in LA with Gen and Zee when there).

So it’s a costly business for sure.

Right now we are playing in Korea at the Asiana International Short Film Festival and in a couple of weeks I fly out to Bilbao in Spain for a week, to attend their festival.

You can download a copy of the spreadsheet we created by clicking here – we hope you find it useful with your festival run.

But was it worth it? I will have a long think about this and report back on the blog in the next few days. Also, I am filming an extra module for the Gone Fishing online workshop to go into greater detail about festival strategies and help members create their own stretegies for their films (remember, if you sign up now, you will get all updates when they are published).

OK, for those of you who didn’t watch before, here again is the video blog from Rhode Island, crammed with tips on attending festivals.

FREE online seminar, 'Making Web Based Comedy and Films' with the Misery Bear Team
Gone Fishing on Korean Fishing TV channel!
50 Kisses selected for the Rhode Island International Film Festival 2014
Bradgate Brings Some Finance!
Nine personal and shocking experiences that reflect the terrible underbelly of SOME film f...
Gone Fishing Proposal - Final Proofs Before Printing
Request from Down Under for Oscars Insider Tips…
Have you made a 'film' or a 'movie'?

5 Responses to Gone Fishing, the festival data is complete!