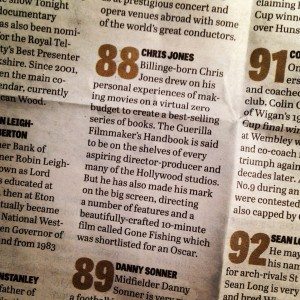 When I was a kid, growing up in the northern town of Wigan, my first job was delivering a newspaper called ‘The Wigan Observer’.

This was a Wednesday-afternoon-only-job that paid 40p a week, that was ontop of my regular morning paper round that paid £3.00 a week  – getting up at 5.30am and doing my round in ninety minutes.

And so it brought a smile to my face when my mum called the other day to tell me, ‘that newspaper you used to deliver, well they have just done a poll of Wigans most influential sons and daughters… and you are number 88!’

Turns out the lists is 160 strong as the newspaper is celebrating its 160th year. And Nick Park of Wallace and Gromit fame is at number 81!

I have only ever had one job in my life. That paper round.

It rained a lot on those rounds. It was dark in the winter and very, VERY cold too. I got two days off a year, Christmas day and Easter Day. Otherwise it was seven days a week.

I don’t begrudge it because it gave me enough money to enjoy those years, buying and making Star Wars models, playing video games down the arcade, going to the movies, buying Starburst magazine and getting soundtrack LP’s from the record exchange. Great times.

But I also learned that when I work for someone else, it will always be on their terms, with their pay scale, with them calling all the shots.

From the day I quit to this day I have never had a job working for someone else. I have done some freelance work, but never more than a few days here and there.

But I am the 88th most influential person from Wigan. Isn’t that fabulous?

Thank you ‘Wigan Observer;. You have no idea how influential you were at the most formative of years.

A year after I quit my paper round I was able to make my first super 8mm movie, ‘Necronomican: Book Of The Dead’ and I blogged about it here http://www.chrisjonesblog.com/2012/05/my-first-movie-%E2%80%98necronomicon-book-of-the-dead%E2%80%99.html