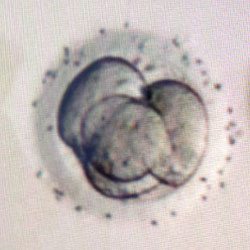 For the past four months or so I have been pretty much offline, off social media and not updating my blog.

Life has thrown me some pretty significant curve balls.

Last summer, Lucia and I underwent IVF. We were delighted that on our very first round we had success!

We now know (pretty much down to the minute) the time and date of conception.

Those daily hormone injections now seem a small price to have paid for this gift of modern medicine.

Don’t get me wrong, it was also an anxious time, but we worked very hard to keep us both in a state of certainty. We chose to Believe with a capital B.

But there was a complication. 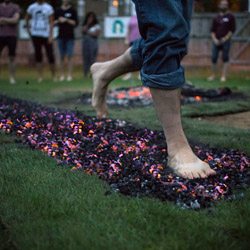 Lucia began to get pain in her leg which was diagnosed as sciatica. Ouch. But manageable. Though worryingly, we could not find the cause of the sciatica, and it was getting worse daily – to the point where just walking was a serious challenge. We assumed it might be related to the IVF injections that were administered daily using horror movie length needles.

Still, crippling sciatica or not, the trooper in Lucia carried on through our amazing volunteer training day – I did draw a line at the firewalk though – she is the only member of our team who did not walk across 1,000 degree hot embers that day.

Then came the first ultrasound scan and the thrill of seeing our child – the filmmaker in me could not resist shooting some cheeky shots. The scan was all good. Our mindset of certainty seemed to be paying off.

And while we did face complications because of the sciatic nerve pain, we remained hugely confident and excited. 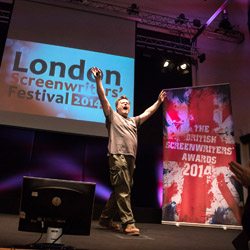 As the London Screenwriters’ Festival approached, so my hours of work expanded, the pressure ramped up as we prepared for the biggest, most ambitious festival yet.

And if you came to the festival this year, you will know I left blood on the stage. It was insane. In fact, ‘f******g awesome’.

This year was made doubly challenging as I had a flu like virus the week leading up to the festival, a virus that pretty much wiped me out by the end of three days. It’s one thing giving it your all, but I discovered it’s an entirely different thing giving everything while ill.

Still I managed it. Even if it nearly killed me. 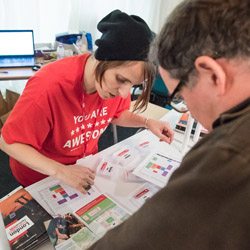 If you came to the LSF you will almost certainly have met Lucia too as she ran registration for us this year. But all that standing at the registration booth, instead of bed rest, caused her sciatica to flare up badly. It was pretty terrible for her by Sunday night.

But that was, I now know, the calm before the storm… a precursor for what was to come just days days later…

While running a masterclass with Linda Aronson, I got the call from Lucia… ‘Come home… code red!’

Within 30 minutes I was back in the flat to find Lucia in what can only be described as total physical shock from the agony of something very wrong with her back.

She has no memory of that time, but it’s seared into my soul as one the most terrifying few hours of my life.

In those moments I was unsure if she would die, or we would lose the baby, or if she would ever walk again as she had no feeling or ability to move her legs.

I called the paramedics and within 20 minutes she was on ‘gas and air’ and being hauled out into the cold rainy night and bundled into the back of ambulance.

Over the next 24 hours she was examined, tested and finally we discovered the cause of the loss of movement and feeling in her legs.

What we initially thought was just sciatic pain caused by inflammation in her lower back (from the injections), was in fact a bulging disk that had just ruptured and slammed into her spinal cord.

You can see from the scans that the bulge is huge, 10 mm in size and protruding halfway into her spinal cord. Though thankfully the injury was at the base of her spine. 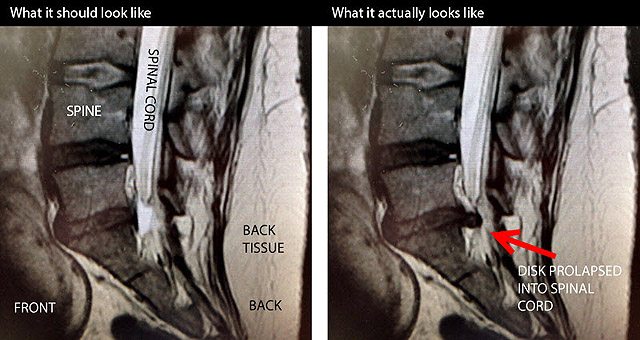 Lucia remained hospitalised for a few weeks. Trips to the hospital bathroom took ten minutes to walk each way (just fifteen meters from her bed). But over the coming weeks that reduced to nine minutes, eight, seven….

Importantly though, she WAS able to walk, and improvements were made.

And the baby? Well it turns out HE, well he was fine. We got to find out early that we are having a boy. We have since passed the all important 20 week scan and all is fine.

What a trooper. Then to be honest, I expect no less.

His mum is a trooper too.

Finally Lucia was discharged and stayed with her parents for a few weeks as she needed 24/7 care. We bought an ultrasound baby monitor so we could listen to his heartbeat every few nights. You can listen below… (here is a LINK to the machine we bought on Amazon to hear the sound of the heartbeat – amazing what you can buy now).

And then she came home. 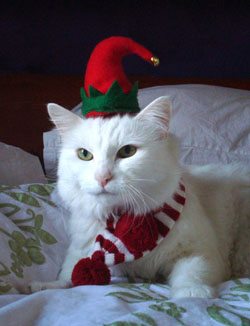 Almost right away Bryan, our amazing cat, started peeing blood. We discovered he has bladder cancer and were given the warning he could ‘go’ anytime. Over the Christmas break, three times we were certain that we would say goodbye to him within the hour.

But… he has no idea he is dying. He just wants cuddles and fresh chicken.

And so, against all odds, he is still with us. Purring and loving it. Nine lives? Pah! Bryan is in double digits, never mind nine!

While Lucia is making progress, so the baby is getting slowly bigger and offsetting any improvement.

Yesterday we saw the spinal injury specialist and it was laid out clearly just how long this will take to improve, and how long a partial recovery will take. A full recovery is unlikely due to the size of the prolapsed disk.

For those who attended the London Screenwriters’ Festival, and in particular my opening session… you will recall I spoke about ‘life occurring’.

Well shit, life has been occurring for me and Lucia, and even Bryan the cat.

It’s the story we choose to tell ourselves about ‘life occurring’ that matters.

It’s the person we choose ‘to be’ while playing that particular game that matters. And we can always choose which version of ourselves we bring to the game.

So I choose to see this as an extraordinary adventure.

And I choose to bring the best part of me to this adventure.

Anything less and it would be no fun.

For me, finding THAT FUN and discovering the adventure is the only way to tackle head on the great challenges in life.

I am blessed to have an amazing group of people around me.

And I am blessed to have Lucia gritting her teeth and fighting unending daily pain. Without her strength, I am sure I would be writing a different story.

I also know many people around the world are enduring far worse problems. Plus, we are supported by the NHS. In my first hard experience in the last year, it truly is world class and staffed by extraordinary human beings. Especially the paramedics and nurses who I have seen calm, confident and professional under extreme pressure on the frontlines.

So yes, we are blessed.

And even better, an extraordinary adventure lies ahead. We will rise to that adventure with gusto and enjoy every second.

All of this of course pales when it comes to the discussions we are having about baby names… I am set on an outstanding name. Let’s see how that game plays out too!

Talent is great but relationships get you hired: top ten tips to getting the gig in film and TV (aside from your talents)
Screenwriters: The Seven Hoops You Need To Pass Through To Get Your Script from IDEA to SET to SCREEN…