When parents at the school gates first started talking about the charity fire walk that was coming up later in the month, I didn’t think too much about it. It seemed like a great idea, but that’s as far as it went. I thought it would be a nice idea to go along as a family, to show our support – but then reality kicked in and I knew that ‘mum duties’ would probably take over and I’d end up not making it, and just hearing about it afterwards.

It was Wednesday evening, three sleeps until the event.

On the school bulletin, more and more information was coming in, including a list of names of the people taking part. I started to feel excited about it, I was definitely going to go and watch it, I thought. I started to imagine what it would be like, standing there in the crowd, the smell of the hot coals, the crackling sounds from the fire and the buzz of the atmosphere.

That evening, lying in bed, I knew I needed to go to sleep but I just couldn’t switch off. I started to realise that I hadn’t felt this excitement about anything for a while either. Something was telling me I needed to go for it. I knew that this challenge was something I had to do. I turned over to my partner, Jeff, and said: “I think I want to do the fire walk.” I had no idea what his reaction would be.

“Yeah why not?” he said. “Go for it.” Perhaps I’d been hoping to be talked out of it or reminded we had other plans – but no. Of course, the doubts soon crept in – could I actually do this? I couldn’t possibly? The kids would need me. I haven’t got time. Despite all this raging around my head, something made me say: “STOP. I am going to do this. I’m doing it for me. I’m doing it for my daughters. We’ll find a way.” Somehow, I just knew that this would help me move forward from this horrendous painful journey I had been going through.

Right there, at 10.30pm, I messaged the organiser and asked if it was too late to join. Within minutes she had replied, saying there was space and sending all of the info. I quickly signed up before I talked myself out of it.

I imagined what it would feel like to walk over those hot coals – the pain didn’t bother me at all, I was focused on the end result and how fantastic I would feel. The happiness, the joy, the fun, the laughter – that genuine feeling that I’ve not felt in so long. I just wanted to feel it straight away.

Saturday quickly arrived, I couldn’t wait to get started. I was excited, but some nerves started to kick in. Would it be all I had hoped for? How would I cope under pressure? Would I cope at all? More people entered the room, familiar faces appeared, and I could feel their nerves. I started to doubt if I should even be here. I was worried it might be too much for me.

It was too late to back down now though. I was in the room.

Chris, who ran the fire walk training, introduced himself and the intense music started playing. Chris explained that you can either fight this experience, or embrace it – all of it, from the introductory talk and training, to the fire walk itself – we could get as much out of it as we gave in to it. I felt ready to go with it and take whatever was coming my way. The hugging strangers and dancing was an odd one, but I was here to embrace it, and that’s what I did.

We focused on what was weighing us down in life and what was holding us back, stopping us from being who we wanted to be. We thought about what life would look like if we let ourselves continue in this way. I was listening to him, gripped. My heart rate was up, my breathing had increased. I felt calm and comfortable, and then as if my heart was going to jump out of my chest.

I kept on thinking and about how postnatal depression was taking over my life, my children’s lives, my career, my ability to be the mother I so desperately wanted to be.
Emotions were high, I could feel it in the room – tears, laughter, concentration, support, encouragement and a place of safety.

Part of our training was to walk across a pile of broken glass to prepare us for the fire. We each took a piece of broken glass, wrote on it what we feared most in life and threw it onto the pile. Then we stepped out across it. I walked with purpose, and it felt so empowering. I had just walked over glass, no cuts, no pain just the knowledge that I was walking over this fear and it wouldn’t take hold of me.

As the moment to do the firewalk arrived, I felt like I was ready to take on anything. I was going to do this. Outside, it was dark. I was squeezing my partner’s hand so tight, I felt vulnerable, emotional, tearful.

Before stepping onto the fire we had to visualise the person we wanted to be from this moment onwards, and to give them a superhero name that meant something to us. These names were not going to be disclosed until the very moment we took our place and walked across the fire. Then we had to shout them out loud, into the night.

This was so hard.

I knew what I wanted to be, I knew I had to be true to myself but it meant sharing my battle with post-natal depression with others. I wanted to get over my fear of letting others in and keeping everything so private, but this was the hardest thing of all for me.

We were in a line, and it was soon going to be my turn. I was listening to all the powerful names others had proudly shouted – Communicator, Warrior Queen, Lioness. The vision of that confident lioness striding over those coals was so powerful.

It was my turn, I took my place, I could feel the heat on my legs, I could hear the cheers and the children shouting.

“Are you ready?” Chris shouted from the other end of the hot coals.

No. I wasn’t ready. I could feel myself crumbling, the emotions taking over. “Yes,” I half-heartedly replied.

Then, the moment I feared the most came. “What is your name?” asked Chris.

I told myself that I wasn’t strong enough to take control of this illness, that I couldn’t look weak, couldn’t let everyone in. My vulnerability would be exposed and there would be no going back.

And yet, I could hear and feel so clearly the encouragement from others, including those closest to me. But I felt out of control, held in place by my fear.

Chris shouted to me, across the fire, made me look up and forward. He made me feel strong again. “Channel that wonder woman that you really are” he said.

That was it. Suddenly it made sense. Who I really am – not who I’ve been the past two years, but who I really am.

“Tell me, are you ready?” Chris said.

“PND WARRIOR” I shouted, with meaning

And I walked over those coals – crushing all the crap that had been thrown at me since the birth of my second child. And with every step I knew, it was not taking over my life anymore. The journey starts now, this invisible illness is being kept at bay. I will not let it take control and rip me apart again. And I will never return to the person I was before.

I didn’t feel the heat of the coals, just the crunching underfoot. I was getting closer to the end, to the feeling of relief, to a weight being lifted. That was it. I did it. I was back in control of me.

Chris said that for most people, the most memorable part of the whole firewalk will be the training. And he was right. Through this experience, I was able to find the strength, grit and determination that’s been hiding inside me, and use it to visualise what I wanted my life to be.

The moment I stepped off those coals was so overwhelming. It was truly a new start. I held onto Chris’ arms at the end, tears rushed down my face. The relief, pride. I had done something for me, to help me move forward in a positive way. 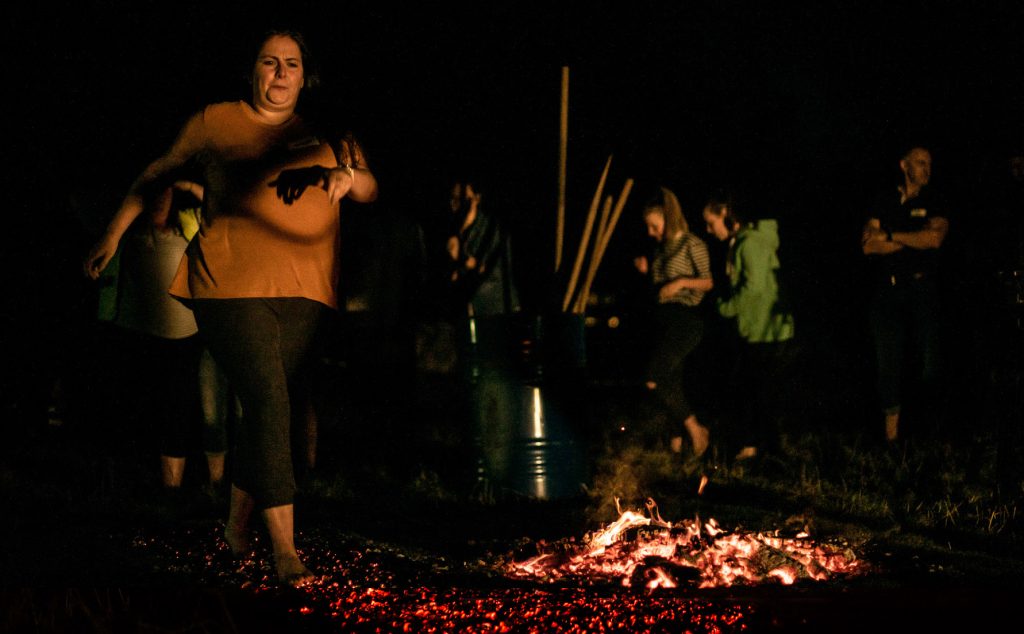 It made me realise that I’m stronger than I thought I was.

This depression, that so nearly took my life from me and my children, had been stamped into those coals and burnt away forever.

Note from Chris… If you resonate with Shona and her powerful truth and courage, throw a fiver into the campaign for her kids, and all the kids at the school here… http://tiny.cc/miserden

Fifteen Feet of FEAR! Firewalk for Disabled Youth... Help us raise £3,000
They Are Called Fire Kisses For A Reason by Claire Coles Jones
This Girl is on Fire by Emma Johnson
Firewalk With Me...

They Are Called Fire Kisses For A Reason by Claire Coles Jones
Joker… Does YOUR antagonist go on their heros journey into hell?

One Response to Walking on Fire by Shona… A personal journey to rediscovering ‘strength, grit and determination’