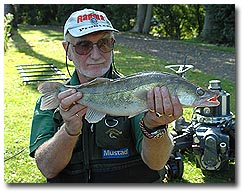 Still working on music for Gone Fishing. We have entered that dreaded stage where we have fallen in love with the temporary music we used, and anything else, just does not do the same job. This is a typical problem and I am trying hard to stay focussed on a solution and not on what I feel I am losing. In fact I am not losing anything as there is no way I could ever use the John Williams tracks we laid into the edit as temp music.

On the upside, we did start track laying with music from Audio Network and that has gone very well, especially for the ethereal parts of the score. The problem scenes we have are the big dramatic battle scenes between Pike and boy. Jaws for kids as it were.

On Sunday we collect the killer Pike from FX guru Jenny Cochrane and get it into the water on Wednesday for the shoot. Interestingly, during test screenings, no-one has commented on the lack of a pike in the edit, in fact, I am now thinking it may be better never to show the pike at all. It seems everyone has their own imaginary fish that will probably be bigger and nastier than whatever we shoot. I am sure we will get some subtle underwater glimpses of our animatronic pike, but I am now wondering if we will use it in the way we initially thought we would. We will see what happens on Wednesday. I hope we get AMAZING footage.

This only serves to highlight the creative journey and how much is lost on that journey. You shoot so much and throw most it away. The same is true with ideas. It’ s just a very lossy process.

Notes for emerging composers… how to get noticed by producers
Chernobyl: An acoustic masterclass in storytelling by Hildur Guðnadóttir
Dick Smith, legendary makeup artist has died, his legacy for me, cannot be underaterd
Live on stage with Thin Lizzie - parallels with the film industry
How to best use library music for your film – top 8 pitfalls to avoid
Writing The Score for Escape From New York
Pickup shoot is planned for next Wednesday
Digital Effects Work Begins