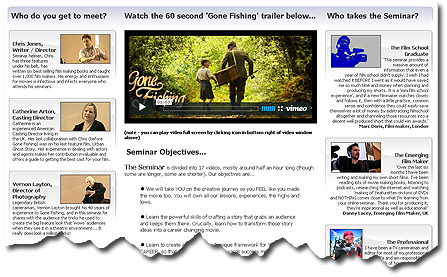 The Online Guerilla Masterclass about the making of Gone Fishing is currently being updated with the extra new sections on festivals, sales, marketing, awards and beyond. Anyone who enrols now for £69.99 will get these extra sessions for free (after these new sessions are live, the price will go up).

I just wanted to share with you the incredible comments that our automated feedback engine is producing. So far we have received 100% five stars out of five ratings, and delegates have truly come from around the globe – London, Australia, Canada, USA even one in China! Awesome.

We worked hard to deliver a really immersive experience that any film maker would find educational and inspirational, and by delivering online, we were able to keep costs down, and pass those savings on to the delegates.

Anyway, you can read the full feedback here…

Fri, 3/6/09 8:13 PM Absolutely fantastic, attention to detail is worthy of Gordon Ramsey himself (what higher praise is there)
The seminar was very detailed and informative. Very interesting the whole way through and above all else it was very inspirational. If you are a film maker I think this is an invaluable tool and for the price, simply amazing.
Michael, Actor/Film Maker, Canada

Fri, 3/6/09 1:55 AM I loved the seminar and loved the experience! Essential viewing for EVERY filmmaker, no matter what sort of film you want to make or what level you (think) you are at.
This Seminar is essential viewing for everyone who either, is thinking about working in the film industry, is beginning their career, is at film school or has been creating films but not having the success they desire. I feel the seminar as a whole is catered more towards someone who wants to be a director, but as an aspiring producer, with experience in production design, I still felt I learned a lot and if your clever you can work out how to tailor the advice to your own stream. I loved the format of being able to watch the seminar online at my own pace, to fit in with my schedule and as tempting as it was to jump ahead I'm really glad I didn't. It made me feel like I was part of making the film. The applet is really easy to use, and instructions are clear. It's great that you can go back and watch over the videos more than once. you certainly pick up on new things each time you watch it! The whole seminar was incredibly inspiring.  Thanks Chris, hopefully one day we'll be thanking you at the Oscars ceremony!
Kate, www.ronansescape.com

Thurs, 2/26/09 9:22 AM An in depth look at the inner workings of making a world class short film, essential to anyone looking to make acclaimed shorts.
The seminar is both inspirational and eye opening. It gives you the self belief that you could make a film and the mindset for actually making one, now not only do you feel you know how to make a quality film but have the knowledge needed to exploit it. A top notch claritive look at the film industry from someone who has seen it's inner workings.
Ross, Film Student, London

Wed, 2/25/09 2:29 AM  A MOUNTAIN OF KNOWLEDGE FROM A SHORT BUT PERFECTLY FORMED FILM
My producer and I first saw gone fishing while at cannes 2008. I recognised chris's name and was intrigued, slightly baffled and somewhat curious as to why he had returned to shorts after making full features. It took about 30 seconds to see why and forgive the pun…we were hooked. The sheer quality of the piece was a slap in the face wake up call. We had arrived at the festival with a short we were very proud of, and now sat opened mouthed staring at what a short could and should be. It wasn't just the cinematic depth and richness of picture or the outrageously professional sound and music track, but the captivating sense of identification with the characters. The subject of death and loss is skillfully and respectfully carried within the narrative of an old fishing tale that beautifully piques with a surprise ending. A mini masterpiece. The course dissects GONE FISHING and bares every facet of what goes into the making of a movie at professional level albeit on a small scale. From concept to creation in the making of this remarkable piece of cinema. I trully believe that the course has forced me as a writer and director, to sit up and reassess what i am creating…and has made me REBOOT and start again. Thanks to CHRIS for enlightenment and allowing myself and my partners and many other new film makers the benefit of gleaned knowledge from his mistakes, discoveries and achievements…and hopefully he as held the door open for new film makers who have followed his progress in stepping into the light and showing what they have created… oh and the gauntlet has been thrown down after spoiling our cannes with you bloody great short film… 🙂 Standing back to get the whole picture in…
Richard, Writer/Director Filmmaker… London

Thu, 2/19/09 4:06 PM  Undoubtedly the most useful 7 hours I have ever spent learning about film making!
Chris Jones' seminar is the perfect experience for anyone unable to afford to go to film school – and for those who have already been, this seminar reveals the realities of what can be achieved outside the safety of some educational institution. I spent more or less (usually more) seven hours a day at film school five days a week for two terms, yet your seminar was by far the best 7 hours I ever spent learning about filmmaking!! There is so much useful information in Chris' presentation because he isn't merely theorizing about the hypothetical, he is presenting the journey he undertook to get his film made to the highest possible standard! So, to anyone who wants to be a filmmaker: watch this seminar then read some David Mamet books then go out a
nd shoot your movie!!
Chris, Aspiring Filmmaker, London

If you would like to take this online Masterclass, you can sign up right now and be un and running in moments by going here!

What REALLY makes a film maker successful? One simple strategy...
Tangerine: Shot on iPhone 5s and with near zero budget, the ultimate microbudget mastercla...
One filmmakers journey… how we met at the Guerilla Masterclass and went on an extraordinar...
Get a ton of filmmaking tips, tricks and articles every day
LA Screenings Video
Credit Crunch = AMAZING NEW POSSIBILITIES!
And the award goes too… ALL OUR ASSOCIATE PRODUCERS!