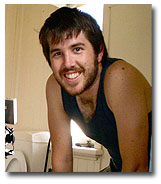 When I ran my 2 day seminar at Heart Of Gold, I met a film making couple, Mark and Candice. They were both charming, determined and entirely free of cynicism. Marks energy was infectious, so I pushed a little harder, we had a meeting and a whole new possibility evolved… Here’s what Mark has to say about the whole thing in his words…

I've just finished writing the spec-script for the idea you proposed to us in our meeting after the Guerrilla Film Makers Masterclass. When you suggested it I said I could do it in a week and it's now been two, but it feels great to have a 96 page commercial script in my hands as I write this.

Okay, so here's a bit of background. Prior to coming to the course, I'd completed writing and directing a bunch of no-budget features (along with my once girlfriend, now wife, Candice who co-wrote and produced all of them), and had been in post production on our current no-budget feature. Around five years ago, I decided that the best way to learn my craft, would be to get out and get as much experience as I could, 'perfecting the formula' of making features from start to finish – so if one day someone said to me and Candice 'here's some money to make a feature, can you do it?' I could say 'of course, we've done it five or six times and can guarantee this level of quality' which I figured would be looked on favourably (even if they weren't perfect, the fact that I'd made ninety minutes of comprehendible story with a couple of thousand raises a great question- 'what could these guys do with a couple HUNDRED thousand' or my dream- '…a couple MILLION'). So I was in post for a month onlining my fourth feature, looking at the footage thinking 'This is my first movie that I'm actually gonna SHOW people'.

It was PERFECT that I reached this place before attending the course… because I never could've imagined how it was going to change my life. I arrived, and from the first day I knew that this… meeting Chris Jones himself… was a catalyst in my life.

The part of the course from that first day that resonated most with me was when you said – 'With each film you work on, you learn less, but the depth of what you learn is far greater…and that's the good stuff, you wanna get to that!'

…so here I was, lapping this up. Feeling perfectly validated, this is EXACTLY what I've experienced to this point and only in the last couple of weeks, have realised that I've started getting to the GOOD STUFF! Our movies are getting to a place where they might actually be considered GOOD by someone other than our buddies.

But then you hit the group with the STAGES OF PROGRESSION IN A FILM CAREER. You told us how most people probably thought they were a stage ahead of where they really were, but I knew exactly where I was. Sitting comfortably at the later part of Act 2.

After the first day, I was feeling pretty good. I'd definitely been validated in that what I'd been doing up to this point had all been right. I'd ticked every box with my plan. But I could already smell a rat. I could sit in this space comfortably for the rest of my life – get a day job, have kids, and make movies for the fun of it at a fairly high level, for not much of a loss – there was only one problem with that (which I knew prior to the course), and that was that at age 22 I'd set a goal for myself that by 28 I'd be making money making movies (as a point of reference I turn 27 this Saturday). I didn't want to be Spielberg (yet) by 28 or anything, but I definitely wanted to at least be a blip on the radar of the film industry – and my definition for that was to be being paid to be a writer/director.

So on day 2 of the masterclass, in the first session when you went through the (your) start to finish process of actually making a movie, the penny dropped. It was time for me to move into stage 3. You'd taken the course from giving VALIDATION to building CONFIDENCE. It was a scary thought, but I realised that in the course of doing that first day, then arriving on the second one, I'd just crossed the act 2 turning point on Stage 2. There was no more going back… it was time to (figuratively) save the world (get my last movie done, released, and start on my path to making my first commercial feature, moving eagerly onto Stage 3).

I was so excited that in the break I came and basically went …. blah la la la oh la la blah la la WOW la la ….to you and tried to explain the whole process as it had happened in my mind and how profound a change in me you'd instigated, without really even directly addressing me and my situation. I remember your reply was (to Candice who was silently standing next to me listening to my rant) – 'Is he always like this?', then back to me 'Blimey! THAT was an experience.' You told us how it was great for you to help, and that it helped you to help us. At that point there was no denying you'd served as a mentor figure for this part of my journey, and that no matter what the afternoon contained, I was ready and raring to take on the world.

The day finished, and elated, Candice and I went to the opening night of the festival with you and saw Gone Fishing and how it affected the crowd positively. Afterwards we said bye, and drove home.

The next day I was back to my renders. I finished work on another scene and se
t it rendering. I checked my email, and there was an email from you saying you wanted to meet with us again. I was ecstatic! We drove back down on Sunday to meet, talked about a bunch of stuff, and you gave me an idea for a spec script. I said, 'Well, I'm onlining my movie basically 24/7, but what the hell, I love a challenge, I'll have a script to you by this time next week.' I think you probably thought I was a little nuts, but wished us well and we left the festival for 2009.

The whole drive home, Candice and I started brainstorming ideas. When I got home I did more movie work, then set something rendering and went back to spit-balling ideas for the movie. After about three days we moved from idea stage to writing. It was a trip ‘cause it was a specific genre script and was absolutely unquestionably a commercial idea. So here we were, for the first time, writing a movie on spec that we (scarily) couldn't shoot without money.

As scary as it was, as it came together we were constantly like 'This is actually GOOD' and 'Can you believe we're writing this?'… the challenge itself raised the bar so much higher than we could've set it ourselves. That push, that faith, was what drove us to completing the script…

…and we just did. And it feels spectacular. A 96 page script, sitting in my hands, that I KNOW I will make money from, that I will START MY CAREER with. How much was that course…? I think we took advantage of you ;D

I sent you a Skype message the minute we finished it. Then we went and grabbed some Burger King so we could eat and reflect and on our achievement, and while sitting there realised that the last time we'd been in there was around two months ago, the day we finished production on the movie we're now almost finished. There we were, with an almost finished feature, and a script that was gonna make us money. We came home, and here I am, finally getting a spare minute to email you and thank you properly for the life changing experience you gave us with the masterclass. Thanks Chris.

From here, we'll probably rework it and get started raising money (something we haven't done before), while screening our new movie at festivals. It'll be amazing experiencing the process of working on a movie to sell, and I can't wait to see where it leads. I know my life has changed for the better as a result of you meeting me, seeing something in me and Candice as a film making team, and giving us the courage to push that bit harder, to take our work to the next level. I turn 27 this week, and thanks to meeting you and doing the course, I just might reach my goal of making money from my movies by age 28. I've got a year and a week. Let's do it…onwards and upwards…heh.

Blimey Mark, thanks so much, and keep us all informed about the script, as I am dying to share the title and one liner with the group. It's an immediate 'I GET IT!'

And I am now planning dates to run the Masterclass here in the UK in the next month or so.