By Chris Jones on October 23, 2009 in Guerilla Film Makers Handbooks 0 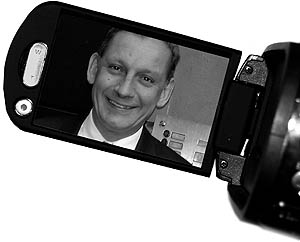 Yesterday, for the new Guerilla Film Makers Pocketbook, I interviewed Paul Cable of  Media and Entertainment Insurance Services Limited. Paul is a great guy and has helped many emerging film makers through the difficulties of finding the right insurance package for their production.

After chatting to Paul, it was clear that there are a number of issues facing film makers working on an ambitious project with specific regard to insurance. There are three main problematic areas.

First is kit hire – here’s why.

It’s not uncommon for a big hire company to help out film makers by supplying half a million pounds worth of camera equipment for free, we certainly got that kind of help from Arri Media Services on ‘Gone Fishing’. But… it needs to be insured, and given the way films are made (you know, hanging out of windows with the camera, working 20 hours a day, using inexperienced crew), and then considering the expense of the equipment, insurance is going to cost a sizeable chunk of the budget. Add you can add to that the problem that the hire companies are also going to need ‘loss of hire’ in that insurance policy too (so if you broke a camera and it could not be hired for three months while it was getting fixed they could claim for loss of hire).

There appears to be no simple way around this and it’s one of those pretty much unmoveable expenses. For ‘Gone Fishing’ our insurance package ended up costing £1,000, but we managed to cover a few other corporate jobs under that same policy, and the clients for those films ended up paying for it (don’t tell anyone!)

So I guess you need to consider insurance as a line in your budget that you are just going to have to bite the bullet on.

The second insurance problem would be ‘Public Liability’ and ‘Employers Liability’, again needed for any shoot really – though Paul accepts that many film makers go without it and just hope that they do not run into problems. These two policies protect you from damage to property and injury to both your film making team and the public – and some councils and other organisations won’t even let you on site without all these ducks in a row. One cheeky way around this is to enter a co-production with a bigger company and sit underneath their insurance policy, and I know of one very ambitious film that did this successfully recently.

The third problem is the old ‘Errors and Omissions’ policy which is essential for features and documentaries (if you ever expect to sell to a major broadcaster or to the USA) – it’s always a shock, especially as it costs around ten grand! The E&O and how to get around it was a major topic in the ‘Delivering Your Baby’ workshop that I ran earlier this year and it really helped to highlight the problems we all face if we are not successful like ‘Paranormal Activity’ (when the studios just take over and remove all the problems).

But, we didn’t need E&O for ‘Gone Fishing’ – our insurance policy just covered equipment, loss of rental and Public and Employers liability, and it cost (if memory serves) around £1,000 (and there is no VAT on insurance). But… I have heard rumours that iTunes is now, or may be, requiring E&O for shorts that it releases. I will do some digging and try and confirm this either way.

Paul also commented that contrary to expectation, HD films do not make many insurance claims for ‘loss of data’. Of course he added these were the films that could afford that kind of insurance cover and that they had excellent onset data backup procedures in place. The problem I see for low budget film makers is that they cannot afford that type of insurance and more than likely, they will suffer data loss as they won’t have adequate backup procedures in place. Now I think about it, most low budget tapeless productions I have been witness to have actually lost some data at some point due to user error, compounded by the lack of any backup system. Doh! I guess the lesson here is, don’t buy the insurance, buy several terabytes of storage and backup every night (and make sure you know what you are doing!).

The whole interview will be in the upcoming Guerilla Film Makers Pocketbook. Paul also wrote an article for Netribution which you can read here.

Top Ten Tips For Making Shorts from GFilm Alum Lee Greenhough
Has The Guerilla Filmmakers Handbook helped you make YOUR film? I want to hear from you...
Everything you need to make a feature film for cinema release
A Masterclass In Microbudget Film Making - Interview with 'Paranormal Activity' writer and...
And it was all going so well... Or was it? Filmmakers, Screenwriters, Creatives... Are you...
What are the five main outcomes for filmmakers attending the Guerilla Filmmakers Mastercla...
Gone Fishing plays in Leicester Sq., support for European Premiere of Jaws documentary
Six hours of new features added to the online 'Making The World Class Short Film' Workshop – sign up discount still available!