Five years ago I was invited to speak to the European heads of Kodak, about why so many filmmakers were switching to digital, and how Kodak could develop new business.

Editor friend Eddie Hamilton joined me and he presented Kodak with what I thought was an inspired idea.

Kodak should become the gold standard in motion picture data management and archiving. What better company to archive your films, rushes and data assets than Kodak?

No-one in Kodak saw the value in this idea, nor the writing on the wall, and the rest is of course history.

And this week Vint Cerf, one of the “fathers of the internet”, says he is worried that all the images and documents we have been saving on computers will eventually be lost (LINK)

So how is good your data management?

And not just for now or tomorrow, but next year, or in twenty years?

I can tell you from personal experience that while we make our movies with incredible love and care, when it’s completed, we slowly fall out of love over the following years. We often neglect to properly archive, manage and make safe the elements of our work for the future.

Bottom line, we all have good intentions, but we also have mislabeled hard drives often without backups. And hands up if you don’t even have the drives? Do you even know where your master elements are? I know, you are not alone, I am right there next to you too.

What is shocking is that at one time, this film was the only thing I could think about, it was the most important thing in my life. Now I don’t know where it is.

Well I  know where one is…

Right now I am considering if it’s worth keeping the negative and all the film and mag-sound elements from my second feature film ‘White Angel’.

There are around 100 cans in my attic and frankly, I am not sure anyone will ever look at them again. (In a deeply ironic turn, I just went to my phone where there should have been a photo for this blog, one I took about five years ago of the film reels in the attic. It’s gone. No idea where.)

As for my first film ‘The Runner’, all I have is one analogue BetacamSP tape which I captured onto Avid a decade ago via DigiBeta (so now on drives). Doubtless this will be the very best copy in existence on the planet now.

The third movie, ‘Urban Ghost Story’, well the neg is somewhere but after the labs went bankrupt, it all disappeared into so vault somewhere. Or maybe landfill. Terrifying. I also have an SD 16:9 digibeta and Avid media project.

‘Gone Fishing’, my Oscar shortlisted short film was shot on 35mm and completed to a very high standard. Last week I realised that the lab who developed the film is now gone and I have little hope of ever finding the negative.

I have ONE copy of the Digital Intermediate on a drive. And ONE HDCamSR tape. And a pile of 35mm prints.

It’s time to make backups of that DI.

And don’t get me started on tapes – I have masters in DigiBeta, DAT, 1”, D1, D5, BetaSP, MiniDV, U-Matic, Hi8… The list goes on. These tapes are no doubt decaying and the players are disappearing forever. Once day these tapes will be unplayable. If you have old films ONLY on tape formats, take action to digitise them now as the players WILL dispensary eventually.

Coming back to today and production happening right now.

What about digital films shot and stored on drives. How secure is that data? You may think it’s fine, but what about that film you shot five years ago on that camera that is no longer used? Can you read the data still?

I am sure that right now you are covered, but how about in a decade? Twenty years? What about when the Windows and Apple operating systems disappear. And they will. Are you going to commit to back and up-convert all your rushes and masters to newer formats every fifteen years?

There is no simple answer to these problems aside from being fully aware that the problem exists and it will creep up on you. Day by day, week by week, year by year, decade by decade.

Here’s what I would suggest with projects moving forward 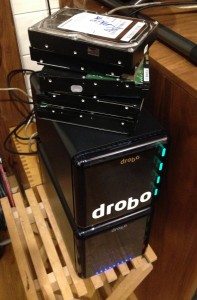 Hard drives are doubling in capacity every couple of years in alignment with Morre’s law. So what may take ten drives today, will likely only fill a part of a single drive in a decade. Of course that won’t help with our future films as we choose to shoot RAW footage in 4k, then 8k, 16k, 32k… and so on.

Today, a 4tb drive costs £120. Buy some and get archiving. Start your regime now and commit to reviewing every five years, or risk loosing your work forever.

The Final Cinema Version of 50 Kisses Is AMAZING!
50 Kisses: How to make a DCP part 2

Shooting With Drones: Ten tips for filming astounding footage on a shoestring
Whenever you feel like giving up, remember… Victory is close

One Response to Is your film in danger of being lost forever? You may say no, but give it a decade and technological revolution…