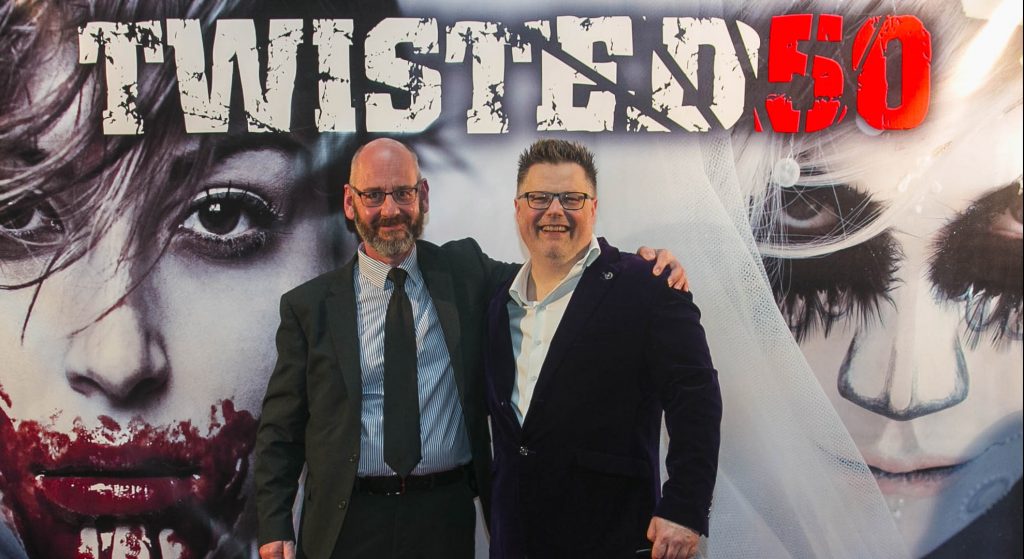 I just found out that Richie Brown, one of our writers from Create50, has sadly died.

Richie was a prolific writer for Create50 and a huge supporter, both publically, and behind the scenes.

A handful of writers really committed to elevating the whole Twisted50 experience for everyone, and Richie was one of them. During the most important months of the project, Richie would email me almost daily with updates, data and information as he tracked in staggering detail, the success of the project. He would also dive into commenting online when commenting became negative.

I know how much Create50, Twisted50 and the wider writing community had meant to Richie and I can tell you, from my perspective, he meant just as much to me and the team too.

I understand that Richie had suffered a stroke and that the Create50 initiative had reignited his passion for writing. It’s easy to overlook the importance of the act of creating, especially to those who NEED to create, like Richie did. It’s what we do, it’s the gift we share with the world, and it is our legacy.

And so I present to you, as a tribute to the great man himself, his story ‘The Cyclist’ from Twisted50 volume one. I do hope that he is looking down now and chuckling at the idea that even posthumously, he get’s to freak us all out.

Bravo and let’s raise a glass to Richie…

Now, read on (or listen if you want the Audiobook version) if you dare…

Listen to the audiobook or read the story…

The Cyclist by Richie Brown

There is too much sky above the Lincolnshire Fens and the uninterrupted horizon sprawls without end. The dreary flatness of the treeless land is relieved but little by the roads, which run on banks higher than the black fields, sometimes alongside wide, deep drainage ditches, the lumbering clouds chasing their clumsy shadows across the empty distance.

Merle drives her little red car on such a Fenland road that seems to run forever, into nowhere, wishing the featureless miles away and the day gone.  She loathes these duty visits to Uncle Stanley, shared out exactly and grudgingly between herself and her sisters. It is madness for him to be living out here alone, at such an age, but he will not move and from a vinegared sense of duty, the three sisters each make their reluctant and separate visits.

“The old bastard,” says Merle, but does not hear herself because Merle does not use such language.

When will she get there? The dashboard clock is broken, so Merle looks at her wristwatch, shaking it down her arm a little so she can see it beyond the cuff of her jacket. She still has an hour of driving she reckons, and looks up and there is a cyclist almost in front of her. Merle swerves but even so almost catches him with the passenger side of the car. She drives on, her heart beating furiously, glancing into the rear-view mirror. The cyclist has toppled onto the grass verge but is getting up and retrieving his bicycle.

“Prick,” says Merle, but again does not hear, as that word, in that sense, is not in Merle’s lexicon. She smiles vindictively; the smile fades: he might have scratched her little red car! Cyclists are so irresponsible, and a complete hazard to responsible and considerate road-users. Such as herself.

In the rear-view mirror, the cyclist is a dwindling patch of neon-yellow, tiny now. Good riddance, thinks Merle.

Merle forgets the incident, content to dwell upon her dull errand, the lack of gratitude the old man will show her, not that she does this for gratitude, and the emptiness of the scenery.

Some miles on, she stops at a level crossing, one of many on the roads of this flat landscape, as the warning lights flash and the barriers drop. A goods train approaches, immensely long, and Merle drums her fingers on the steering wheel as the train crawls towards the crossing and rattles by interminably.

In the rear-view mirror, something snags Merle’s eye. Way back, a long way back, a tiny flash of yellow. Merle peers and squints. Is that the same cyclist? No, almost certainly not, as he must be far behind by now. It must be another cyclist, but has she passed another? No, she has not, because Merle is a very observant driver.

It is the same cyclist, she is sure.

Merle fidgets in her seat. Although it had been the cyclist’s fault she almost hit him, she doubts he will see it like that – they seldom do – so it is best to avoid any potential unpleasantness. How much longer will the train take to pass? She watches the mirror. The cyclist seems to be moving very fast, but it is so difficult to judge as the flat landscape offers little perspective against which to judge speed or distance.

“Come on,” she mutters, unconsciously tapping the accelerator. The train passes by and slowly the barriers raise, and the road is open. Merle pulls away more sharply than she might, pleased to see that the cyclist is still some distance back.

Yet riding very fast, she thinks.

Merle drives on, flicking her eyes to the rear-view mirror more often now. The cyclist does not seem to be gaining on her, but is surely keeping pace. Is that possible? She is travelling at 45 miles per hour, which she deems safe for these Fenland roads. The roads are generally straight but sometimes have bends that take drivers by surprise, and the drainage channels alongside the roads are very deep. Yet, so she might get to dear Uncle Stanley in good time, she puts her foot down, just a little.

Merle concentrates hard upon the road and the driving, edging her speed to 55. She is uncomfortable at such a pace on these roads, leaning forward slightly, gripping the wheel tightly, unwilling to take her eyes from the road to check the rear-view mirror, but at last she does, she has to, and moans a little, for the cyclist is nearer, still a distance off but closer than he was just minutes ago.

Merle presses the accelerator and the little car picks up speed, rattling and shaking as it increases to 65. She never drives this fast, not even on a motorway, and is frightened at how unsteady the car is, how even the slightest movement of the steering wheel is exaggerated at this speed. She grips the wheel in her thin fingers, not daring to look at what is behind, concentrating upon the road as the little red car races on because it is dangerous to drive at this speed but she must look in the mirror, cannot help it, and he is closer again and before her eyes snap back to the road she sees that his legs are blurs, they move so fast, and how can that even be?

The car hurtles on, to 70, to 75, and Merle is more scared than ever before, than ever before in her life, scared of the speed, of what might happen if she loses control, terrified of the cyclist, because it is not right not fair to ride a bicycle so fast, no-one can do that not over such a distance, and again she checks the rear-view and he is closer again, right behind her, so near that she sees his fluorescent upper-body, those impossibly-fast, pumping legs as vague as smoke, and this is not right either, he has no face beneath his silly little cyclist helmet, just a blur of dark,  a smudge, no visible features even on this bright day.

Merle gazes a little too long, then snaps her eyes to the road, thank goodness it is so straight; the noise within the car and the shaking increase, the car racing at 80, the wheel shuddering in her hands, tears trickling unheeded, her whole world now the road, the speed, the noise, the mirror, and she looks again, he is almost upon her, and the shadow where the face is shifts, splits in two, opens like a flower, into massive jaws, scarlet and crimson, lined with fangs, as wide as a dustbin lid, wider, all the time keeping up with her, keeping pace, not missing a beat, not losing an inch, gaining on her and the jaws gape, stretching towards her.

All this in an instant, and Merle breaks, and brakes. The little red car slews wildly, tyres screaming, out of control, and Merle hears and feels the fleshy thump as the cyclist smashes into the rear of the car (she is glad, she hopes he dies, she hopes it is dead) and the car hurtles from the road, down the steep bank into the deep, cold water of the dyke.

Merle is uninjured, although her chest aches where she slammed into the seat belt, and the calmness of shock displaces her fear and panic. The water boils around the car as it begins to sink, surprisingly fast, the bonnet slipping in first, bubbling steam and air, but Merle knows what she needs to do, and unbuckles her seat-belt – it comes undone, no damage, she will not drown here like a rat – and kicks off her shoes. If she could she would take off her jacket, but there is no space and no time. Merle knows that if she tries to open the door the water pressure will prevent her, so she must open the window, and squeeze through that, and swim, if she is to live, and Merle intends to live.

Water pours through the imperfect door seals and dashboard vents, rising to the front passenger windows as she winds her window down, and the car lurches forward suddenly, cold water beginning to flood through the open window, making her gasp so she grasps the door, hauls herself through and out, just in time, struggling to hold herself against the force of water, and she is free. Merle does not look back, but swims away from the sinking car, towards the bank, smiling, eyes gleaming with adrenalin.

As Merle reaches the bank and screams in triumph, the water surges behind her, and something erupts from the grey depths, long, slender and black, flashed with neon-yellow, rearing high, and at the top a vast, red maw, bristling with snagged, sharp teeth surrounding a maroon throat, looming over her, dark against the bright sky, then striking at her, so fast, smashing her into the water, and then Merle sees

Get The Whole Twisted 50 Family for £25 in our May Madness Promotion!
Can you write a Christmas Ghost or Horror Story?
Watch the Twisted50 Audiobook Launch and Awards Video
Can you write a Twisted Short Story to be published in our collection of Spine Tinglers?
And it was all going so well... Or was it? Filmmakers, Screenwriters, Creatives... Are you...
Three L’s: Lens, Light and Location… Advice For Filmmakers from Christopher McQuarrie
Congratulations to the 25 Selected Authors in our Father Christmas Bedtime Stories Book