By Chris Jones on May 3, 2007 in Magazine Articles 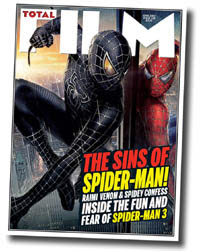 The first part of our three part ‘How To Make A Movie Feature’ for UK Film Mag TOTAL FILM is now out. A full eight pages of starter tips from Team Living Spirit!

Here is one little chunk from this first part…

GET A CAREER PLAN
Most people don’t think beyond the movie they’re making right now be it a short film exercise, experimental music promo, viral email attachment or independent feature film. That’s the big reason why, for most filmmakers, it takes so long to get anywhere: they don’t have a goal and a plan of how to get there.

Contrast that with Christopher Nolan. He went from a 3K black-and-white avant-garde thriller called Following, to Memento for $10m and ultimately onto Batman Begins with a blockbuster budget, all in under 10 years. He never began a film without knowing what he wanted to do next and was already working on that project.

You can also download the first few pages from our site here, or you could go buy the magazine!

Total Film Three Part Feature
How To Make A Film Part 2 in Total Film - Out Now!
Everything is negotiable, my Total Film article part 1
Foster / Hollywood Update
Are you ready for a crash?