By Chris Jones on August 29, 2007 in Uncategorized 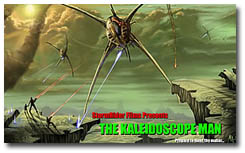 Shooting is getting closer and deals are being struck. We managed to get ALL of our 35mm camera equipment for free from Arri, saving us thousands. Not only that, but we managed to get a second camera body too, so we will have an active second unit for the whole production. Film maker buddy, Simon Cox of Stormrider Films, will be directing second unit (pic is from Simons upcoming sci-fi movie).

Film making is always a war of coverage, there just isn’t enough money time or light to get everything, but by having an empowered second unit, we get to cover much more ground. I learned on the last feature film that I made that a very active second unit is worth its weight in gold. So often in the edit, we would need a shot, and second unit would have some unexpected goody that would get us out of an editorial corner. ‘Gone Fishing’ also has an action scene, where Bill fights with the biggest pike ever caught, and we want it really to be a battle of will between man and beast. Action scenes are often made by lot’s of close up shots without actors, or with just hands – and these shots will be done by the second unit while I continue with main unit to get the drama right with the actors.

For me it’s great to have someone like Simon who I can rely on because I know we both think so alike. It’s a really wonderful thing when you can speak in creative shorthand, and not have to struggle to articulate your thoughts. Simon gets it because he thinks like I do.

I think I’m gonna need a bigger notebook! LondonSWF365 exceeding even our hopes...
One Create50 horror story of how a writer lost their script… completely
Why Star Wars endures so powerfully... It’s nothing to do with fan boys and EVERYTHING to ...
Announcing The Successfully Selected Writers and Stories for Twisted: Ghosts of Christmas
12 ways to rewrite your British written spec script so it sells in Hollywood
George Romero dies and we lose a legend... Watch the Making Of The Classic 'Dawn Of The De...
Gone Fishing Colour Palette
Production hots up…