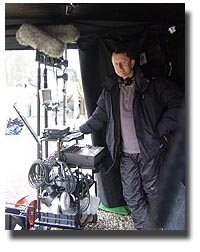 Great news today. Experienced sound recordist Adrian Bell has agreed to record sound on ‘Gone Fishing’. This is particularly good news for me as Adrian recorded sound on my first feature film, ‘The Runner’, the movie that inspired ‘The Guerilla Film Makers Handbook’! So terrific! Adrians website is here. He will be using hard drive recorders which is a firsat for me. I am looking forward to the benefits.

We also enlisted the help of Mike Tucker at the The Model Unit. Mike is a legend, and wandering around his studio was like going down memory lane for me. He even had the original K9 from Dr Who, which he told me he rescued from a skip at the BBC! Blimey.

Mike will be building a scale model set for when the fish is landed – remember, this is supposed to be the biggest pike ever caught. So we are going to build a two foot by two foot section of ‘ground’ that has 50% s

cale models and grass, so when a real live pike is placed on it, the pike will appear twice as big…. the same way they did for that classic horror movie ‘Night Of The Lepus’ about giant killer bunnies. That movie had the classic line, ‘We need to get out of here, there is a herd of killer rabbits headed our way…!’

And here is another idea for getting a fish to flop around in the water, from Phil Mathews, my effects friend.

‘Use a dead one that you buy. Get a mini bumbleball or such like. Kiddies toys (lots of water proof bathtime stuff is now battery operated and pretty impressive) they operate on giromotor I think, pets toys can do the same. Gut the fish. Pop said kiddies toy inside sealed in a sandwich bag and reseal by sewing up or with superglue and superglue activator. It should work a treat. Good luck with everything’

The ONE thing I needed to get right for Urban Ghost Story... BTS on the stunts
Who is in your crew? A guide to low budget film crews
Dick Smith, legendary makeup artist has died, his legacy for me, cannot be underaterd
How I made a SciFi Epic Film on a shoestring... Making KIDDO
The FIVE reasons your career is held back… and how to fix it
Killer Pike Effects
Scheduling