By Chris Jones on September 3, 2007 in Production Design 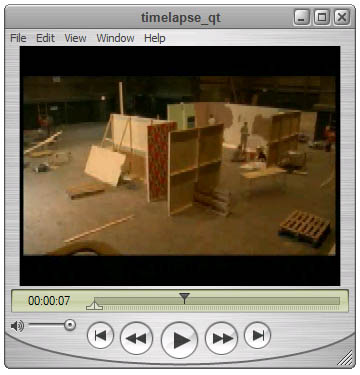 So the set is going up. The one day shoot on the stage, scheduled for Sunday, is going to a great day for people who have contributed to Gone Fishing, to come a see how the whole process works.

There is a time lapse Quicktime film of the first few hours of construction that you can view here. Pretty cool huh.

I am looking forward to shooting on a stage as there are so many advantages. Nearby office, loos, costume, makeup, catering, a quiet stage with near unlimited power… It’s great.

We have made friends with the short film shooting in the stage next door and have struck a deal where we can reclaim their flats tomorrow morning. We don’t actually need them but I am trying hard to get people in the film business to buy into recycling sets. The waste in an average set build is staggering. At the studios where I am based, I often walk past skips filled to the brim with timber that was brand new a week ago. This has to stop and I am doing my best to take a stand on this issue. I will be mailing out to my list to see who wants these flats and anything else we can reasonably reclaim and recycle.

OK. Now I gotta order Pizza for the construction crew.

Why costume, makeup and production design is so important to your film
Shooting 'Mad Max: Fury Road' with DP's John Seale and David Burr: 2 hour masterclass
Day Of The Flowers: Ten Tips for shooting in the heat and humidity abroad
How To Production Design a horror film: Top Ten Tips from designer turned director Melanie...
And so it begins…
Costume design without a fitting!