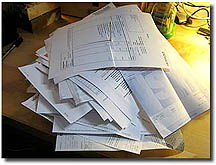 It’s getting to the time where I need to file my VAT quarter, which means I will need to go through all the receipts and invoices on the spike in my office. This is not a job I enjoy. In fact, most people just bundle it off to the accountants! But I am going to wade through it so we can accurately measure our budget.

I have been reflecting on where we spent money and what can be done about reducing those costs in the future. One real problem that I have eluded to before on the blog is mobile phone charges. A few members of the crew had contracts where they had either a vast amount of time available, or even completely free calls. Most others didn’t and some people ended up with huge bills, especially in production. We did have a production policy where we expected people to be on a contract where calls would not cost anything, or negligible amounts. For some crew members this was the case. For some who were not on a contract, this was a problem.

The problem is that some people don’t think about the most cost effective way to make a call before they make that call. First off, ‘am I on a the best contract that I could be, given I may have very intense periods of phone useage?’ Second, ‘can I use a land line to land line phone?’ or  ‘Can I use Skype?’ or ‘Do I in fact need to make this call, can I send an email?’

The real killers are land line to mobile, or mobile to mobile calls without a proper contract. We were seeing individual crew members bills in the region of £500! Now contrast this with ‘Urban Ghost Story’, made a few years back before the ultra proliferation of mobile phones, in production for four to six months, an office with three phones, and the total phone bill was less than £700.

So phones are a real hidden cost. You need to make sure every crew member who will reasonably use a phone regularly, is on an appropriate contract, or they could easily rack up a huge bill that they will expect you to pay. I am on a contract that costs £35 a month and I get 1,200 minutes cross network free. I did exceed this during the shoot, but only just. Production Manager Steph Wrate had a contract that included completely free calls. Fantastic!

So just beware of this hidden cost, it could end up exceeding your entire budget if left unchecked.

When I get through the accounts, I will provide a budget breakdown so you can see where the money actually went.